Why did they start to export gold from Russia 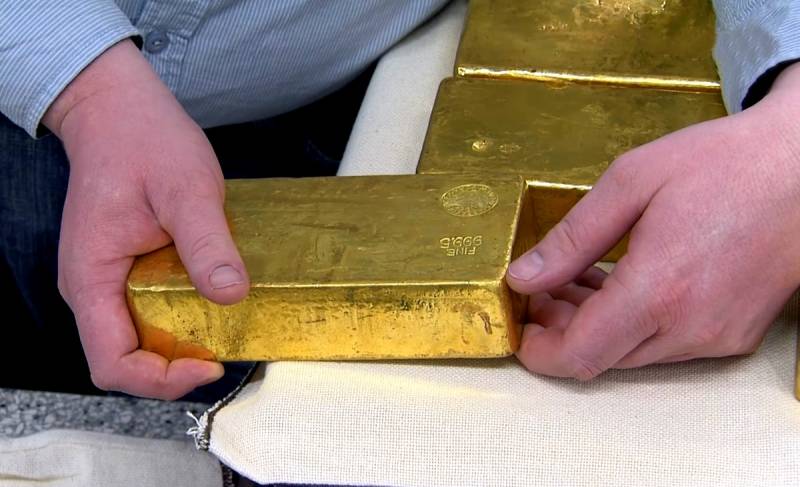 Russian the economy hard times ahead. The fact that the ship began to slowly sink is always easy to understand from the behavior of rats, quietly living in its hold, and then rapidly leaving it at the first leak.


The fact that things at our “gallery” are bad can be judged by the behavior of the backbone banks of the country, which embarked on an accelerated export of gold from Russia to London. Apparently, their leadership "knows something."

Since the sanctioned 2014, domestic media has been full of constant reports of an increase in the gold reserves of the Russian Federation. The Central Bank continuously bought up precious metal, increasing its reserves, which could only be welcomed. Our country confidently moved into fifth place in the world in the ranking of the largest gold holders and could well move to fourth in the next 2-3 years.

However now this indisputable financial policy put an end to. March 30, the leadership of the Central Bank decided to suspend the purchase of yellow metal in the domestic market, saying that further actions will depend on the market situation.
Instead of buying up the most reliable asset, the mega-regulator began selling it abroad, and not somewhere, but to London. In the first two months of 2020, precious metal exports increased by 700% compared to the same period in 2019. The trend is alarming.

But now the largest banks with state participation have followed the example of the Central Bank. Sberbank sold 5,5 tons of gold to the UK, Promsvyazbank - 4,6 tons. Gazprombank got rid of almost 6 tons of precious metal. VTB turned out to be the "leader", which sold 9 tons of gold to the British. In order to understand the scale of the “attraction of unprecedented generosity”: Sberbank has only 17,3 tons of gold left in the vaults, and 45 tons at VTB.

Why does this happen?

What else can they do? The Russian economy is on the verge of a real collapse. The federal budget is more than a third dependent on oil and gas exports. The Oil War was lost in just one month with a bang of some Saudi Arabia. Sechin’s plan to completely destroy American shale failed. Surrender to Riyadh will entail restrictions on the extraction of raw materials 4 times greater than at the beginning of March, so even returning oil quotes to an acceptable level will no longer help rectify the situation.

The “brilliant” strategy of Gazprom’s management also led to logical results. Nord Stream 2 is frozen indefinitely. The monopolist continually gets money in European courts. The expected new lawsuit from Ukraine for $ 17,3 billion in general may leave the company without working capital, about which we detail told earlier. The budget will soon begin to crack at the seams, and the NWF reserves are not infinite.

Well, the “witty idea” of President Vladimir Putin to introduce a tax on interest on bank deposits during the coronavirus pandemic clearly did not add the confidence of Russians in the banking sector. So is it any wonder that the leadership of state-owned banks began to rapidly withdraw gold abroad? Apparently, they are guessing about something there.
Ctrl Enter
Noticed oshЫbku Highlight text and press. Ctrl + Enter
We are
Peace enforcement operation. Russia inflicts a preemptive strike on Kiev
Tons of gold will not save Russia
Reporterin Yandex News
Read Reporterin Google News
Ad
The publication is looking for authors in the news and analytical departments. Requirements for applicants: literacy, responsibility, efficiency, inexhaustible creative energy, experience in copywriting or journalism, the ability to quickly analyze text and check facts, write concisely and interestingly on political and economic topics. The work is paid. Contact: [email protected]
59 comments
Information
Dear reader, to leave comments on the publication, you must to register.
I have an account? Sign in