Russia does not suffer from coronavirus, but from its consequences 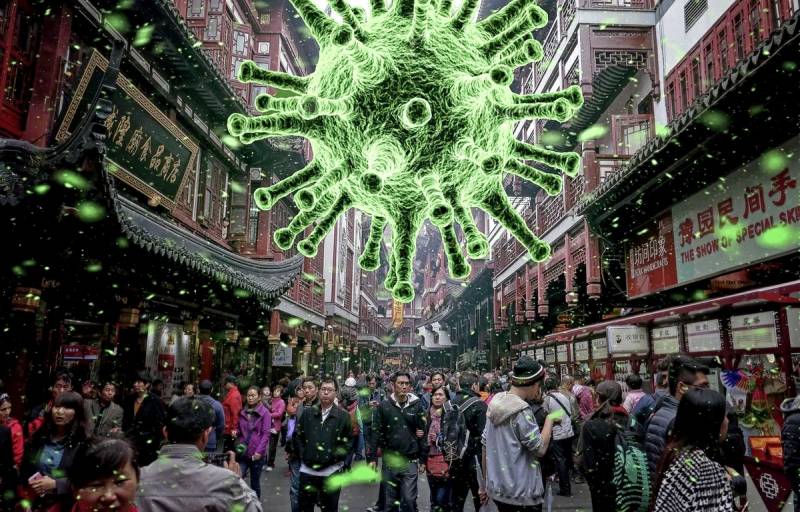 Apparently, the Chinese coronavirus COVID-19 has a real chance of becoming the very “black swan” that will bring down the world the economy and lead to a recession. Who will suffer the most from him, and who, on the contrary, can benefit from a gradually beginning pandemic?


The fact that serious problems are brewing in the global economy has long been known. The United States is waging a fierce trade war with China and its allies in the European Union yesterday. Surprisingly, the coronavirus epidemic broke out in the heart of the Celestial Empire, which is the "world workshop" and at the same time the main competitor to the United States of America. On the causes of the virus in Wuhan, we detail told earlier: they can be both natural and man-made, a kind of "probe" of biological warfare.

Despite the severe quarantine measures undertaken by Beijing, the epidemic is expanding and has already escaped from China not only to Asian countries, but also reached Europe, where it made a rustle in Italy. The virus cannot be called having a high mortality rate in the event of a disease, but the disease affects the economies of the countries where it finds itself, exacerbating the problems that already exist there.

So, in China, with its one and a half billion people, trade, transportation, and the manufacturing sector are very affected. In front of many companies and enterprises, the specter of bankruptcy is gradually looming. The reputation of the Celestial Empire as a "world workshop" can be dealt a painful blow: developed countries that have long transferred their production to the PRC will now think about diversifying risks. Needless to say, this very successfully lays on Trump's slogan “America First”? Other states can follow the example of the USA in the future, having hit China’s export-oriented industrial potential.

However, this is far from all. Taking advantage of the moment, President Donald Trump went to India, which is the real competitor of the Celestial Empire in the Asia-Pacific region, where he presented the large-scale infrastructure project Blue Dot Network ("Blue Point"). At its core, it is a complete analogue of the New Silk Road, which Beijing has been actively promoting in recent years. If New Delhi joins the Trump project, then it will include, except India, the USA, Japan and Australia. China, of course, will remain outside of it.

Thus, Washington, taking advantage of the epidemic, is very quickly chopping down the pillars under the economic and export potential of its main adversary. Coincidence? Maybe.

But that is not all. Coronavirus appeared quite abruptly in Europe far from China. The epidemic unexpectedly made itself felt in Italy, famous for its “frond” in pan-European affairs. Neighbors immediately began to fence themselves off from a dangerous neighbor, the issue of Schengen visas was in question because of the risk of an epidemic. And this is only the beginning of a chain reaction. The question is what will happen next, how soon will the epidemic be taken under control in the Old World. And most importantly, how will this affect the European economy.

Forecasts are already pessimistic: if the virus enters Germany and France, the EU pillars, then the consequences will be very serious. World oil prices have already begun to decline, the budgets of Western countries are overloaded with debts. Investor dumping of assets can lead to a liquidity shortage, a debt market crisis, and a financial crisis. It is noteworthy that it will be easier for the United States to get out of the recession that has begun, which will simply turn on the Fed's printing press and lower its key rate, while Europe will not be able to afford it, since the ECB has a negative rate.

To the heap, we can add that the coronavirus also appeared in Iran and South Korea. The first is a direct opponent of the United States, and Tehran already suffers from American sanctions against its oil industry. South Korea, despite its allied status, is essentially also a competitor to US corporations. If you collect the general picture, it turns out that the epidemic is hitting Washington's rivals in the upcoming redistribution of the world order, while the United States itself is in the most favorable position and will be able to overcome the crisis easier than others.

In conclusion, I must say how the Chinese coronavirus will affect our country. The Wuhan epidemic hit Russia’s largest trading partners: Europe and China. The decline in production will inevitably negatively affect the export of Russian hydrocarbons and other raw materials, which makes up the lion's share of federal budget revenues, as well as their value. As already happened earlier, the financial crisis in the West and Asia will quickly spread to domestic sites.

Needless to say, the consequences for our unbalanced economy can be extremely serious, given that the so-called “transit of power” problem is approaching?
Ctrl Enter
Noticed oshЫbku Highlight text and press. Ctrl + Enter
We are
Coronavirus will not kill mankind, but the global economy can
Peace enforcement operation. Russia inflicts a preemptive strike on Kiev
Reporterin Yandex News
Read Reporterin Google News
Ad
The publication is looking for authors in the news and analytical departments. Requirements for applicants: literacy, responsibility, efficiency, inexhaustible creative energy, experience in copywriting or journalism, the ability to quickly analyze text and check facts, write concisely and interestingly on political and economic topics. The work is paid. Contact: [email protected]
6 comments
Information
Dear reader, to leave comments on the publication, you must to register.
I have an account? Sign in