29 2019 June
2
The timing of the launch of the Russian-German gas pipeline Nord Stream-2 may be disrupted. The pipeline is already built at 59%, 3 kilometers of pipe are laid per day, and under favorable circumstances, it can begin to work from the beginning of next year. But it all came down to the position of small Denmark, which accounts for only 130 kilometers of the route. It is difficult to call the position of Copenhagen in relation to the project otherwise than wrecking. 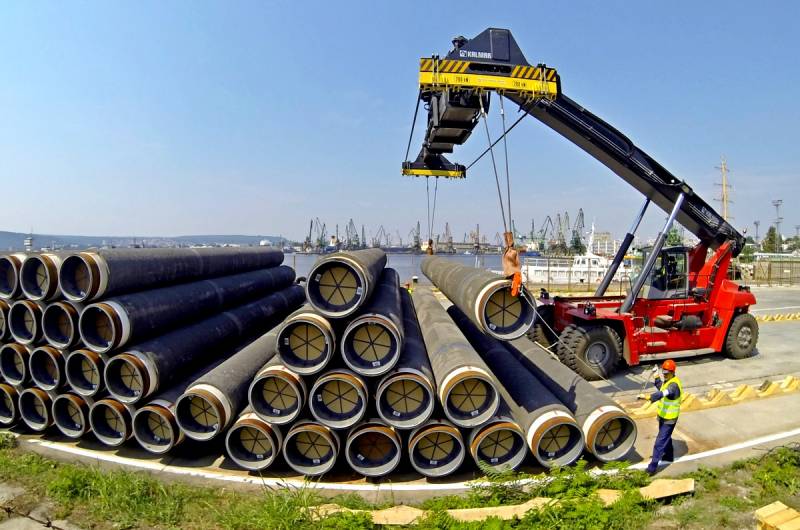 Moreover, the Danish leadership is dirty not only to the Kremlin, but also to the countries of the European Union. The fact is that the Old World itself urgently needs to import hydrocarbon fuel. Translation Program Launched in Germany, EU Leading Power economics from nuclear and coal energy, which are recognized as environmentally friendly, to natural gas. Through Nord Stream 2, Berlin intends to receive 55 billion cubic meters of gas annually.

Russian pipeline gas has an affordable price for consumers, while Gazprom itself is extremely interested in increasing sales volumes and reliability of deliveries to Europe. This project is so interesting to Germany that Berlin even dared to confront Washington in this matter. Chancellor Angela Merkel, clearly not sympathetic to the Kremlin, continues to uphold Nord Stream-2, despite threats from the US Treasury to impose sanctions on European project participants.

The pipeline consistently paved its way, for which permits were received from Finland, Sweden and Germany itself. The last stumbling block was Denmark, in the exclusive economic zone of which the pipe should pass. Three applications have already been submitted to Copenhagen for approval of the route. The first - more than two years ago, and this was done taking into account the recommendations of the Danish authorities. The second is in August 2018. The third and, apparently, the last filed in March 2019. All of them involve various options for bypassing the island of Bornholm.

However, it is precisely the position of Copenhagen that can cause a delay in the timing of an ambitious project. The Danish site can be covered in just a month and a half. But even the first application of the Nord Stream-2 operator has remained motionless to this day. Note that in 2018 in Denmark, curious amendments to the law on the continental shelf were adopted, giving the authorities the right to veto economic projects for political reasons. It is easy to guess that this was done with an eye on the Nord Stream-2. Denmark in this matter acts as a stupid tool for lobbying the "molecules of American freedom", that is, liquefied natural gas, which Donald Trump is actively imposing on Europe.

Will the Kingdom of Denmark succeed in stopping the gas pipeline under construction? Apparently not. The project operator made a decision in principle to withdraw the initial application, which has remained motionless for years, so as not to allow Copenhagen to further drag out time by juggling routes. The company representative said:

This step was necessary because more than two years after the filing of this application, the former Danish government did not demonstrate that a decision would be made.

It is likely that ultimately the gas pipeline will generally be laid bypassing Danish territory. Moreover, Gazprom warned of possible fines already in relation to Copenhagen, if he continues to deliberately slow down construction.
Ctrl Enter
Noticed oshЫbku Highlight text and press. Ctrl + Enter
We are
Peace enforcement operation. Russia inflicts a preemptive strike on Kiev
Kiev gas blackmail: brave Ukrainians did not take into account one moment
Reporterin Yandex News
Read Reporterin Google News
2 comments
Information
Dear reader, to leave comments on the publication, you must sign in.