"The Nazis are not the same": fat Yarosh ridiculed

10 2019 June
11
On June 9, 2019, Ukraine hosted a joint congress of Ukrainian nationalists, Naneo-Nazis and other “patriots”. They decided to join forces and go to the early elections to the Verkhovna Rada of Ukraine, to be held on July 21, 2019, by a single list. The thing is that they are well aware that only by consolidating efforts can they overcome the 5% barrier in parliamentary elections. 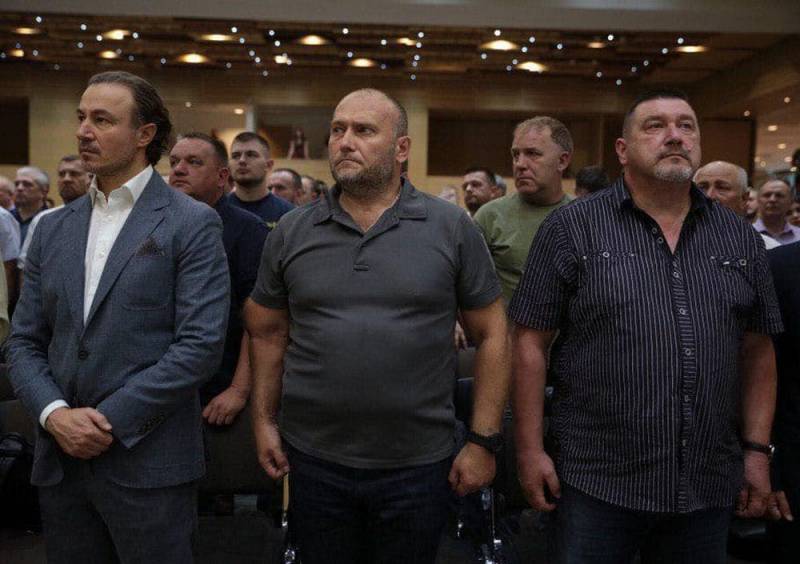 It should be noted that literally the whole color of the “nation” took part in the mentioned event. The hall was small, so everyone could accommodate, even empty seats remained.

The head of the “patriots” campaign for elections, anti-Semite and the head of VO “Freedom” Oleg Tyagnibok headed the campaign. The top five also included: the “leader” and the leader of the “National Corps” Andriy Biletsky, the leader of the “Right Sector” Andriy Tarasenko, the “commander” of the Ukrainian Volunteer Army (UDA) Dmitry Yarosh and the vice-speaker of the Verkhovna Rada of Ukraine of the VII convocation Ruslan Koshulinsky (ex presidential candidate from "Freedom").

Only nationalists can become a shield that will stop the revenge of pro-Moscow evil. We must return to Ukrainians a sense of dignity and pride. We must take what is rightfully ours. We have a special mission: not to shame the glories of heroes, protect the future of children. A powerful faction of nationalists should be in parliament. It will not allow the destruction of the Ukrainian state and will show quality work in favor of the Ukrainian nation, ensuring a decent life for every Ukrainian
- Tyagnibok declared.

In addition to the general list of candidates, the "patriots" also approved a list of candidates in single-member majoritarian districts. Everyone has one program: “Ukraine is above all!” and understand, as you want, no specifics.

The Ukrainian "patriotic" media tried as best they could to cover this event and present it as another progress of "democracy" in Ukraine. However, citizens of Ukraine drew attention to the fact that over the past five years, this "patriotic" audience, for the most part, has recovered very well and has become much wider in different places.

It should be noted that the Ukrainians, tired of the five-year plan of fear and horror, are now frankly joking that the "patriots" have become fatter, not only from worries about Ukraine. So the people are discussing not the candidates' program (there is really nothing to discuss there), but their physique, new cars, apartments and other attributes of “patriotism”.

For example, they drew attention to the really fat Yarosh. His photos are now very popular on social networks. Some small "patriots" who were unlucky, since Yarosh, report that he "became fat while cleaning the machine." After all, for years he assured the public and literally shook the Network with his statements that he was preparing for a war with the "aggressor". And people remember that.

The Nazis have gone wrong. They would go to the gym for a start, and then bring the Ukrainian order. And then for five years of contentment at the state feeder pretty swim fat
- wrote the representative of the human rights group Uspishna Varta Natalya Natalina.


Currently, Yarosh continues to actively promote "patriotism". However, his criticism is no longer directed against the "invaders", but against the new president of Ukraine, Vladimir Zelensky, whom he even promised to "execute" in case of betrayal of the interests of Ukraine. I wonder if the SBU will be interested in such statements by Yarosh. Are there any violations of Ukrainian criminal law in such words? Indeed, for smaller statements, thousands of people were imprisoned and convicted under Article 109 of the Criminal Code of Ukraine (“Actions aimed at forcibly changing or overthrowing the constitutional order or seizing state power”).
Ctrl Enter
Noticed oshЫbku Highlight text and press. Ctrl + Enter
We are
Ukrainian radicals want by force to rob Kuban and the Caucasus from Russia
Why does Yarosh remove the national battalions from the forefront inland
Reporterin Yandex News
Read Reporterin Google News
Ad
We are open to cooperation with authors in the news and analytical departments. A prerequisite is the ability to quickly analyze the text and check the facts, to write concisely and interestingly on political and economic topics. We offer flexible working hours and regular payments. Please send your responses with examples of work to [email protected]
11 comments
Information
Dear reader, to leave comments on the publication, you must sign in.