Filaret told how he was deceived by Poroshenko and Epiphanius

15 May 2019
2
Recently we Reportedas the 90-year-old former patriarch of the Ukrainian Orthodox Church of the Kiev Patriarchate (UOC-KP) Filaret (Mikhail Denisenko) spoke of a split in the newly created and unrecognized, except for Constantinople, Orthodox Church of Ukraine (PCU). Now the power-loving Filaret told how the President of Ukraine Petro Poroshenko and the head of the PCU Epifany (Sergey Dumenko) tricked him. 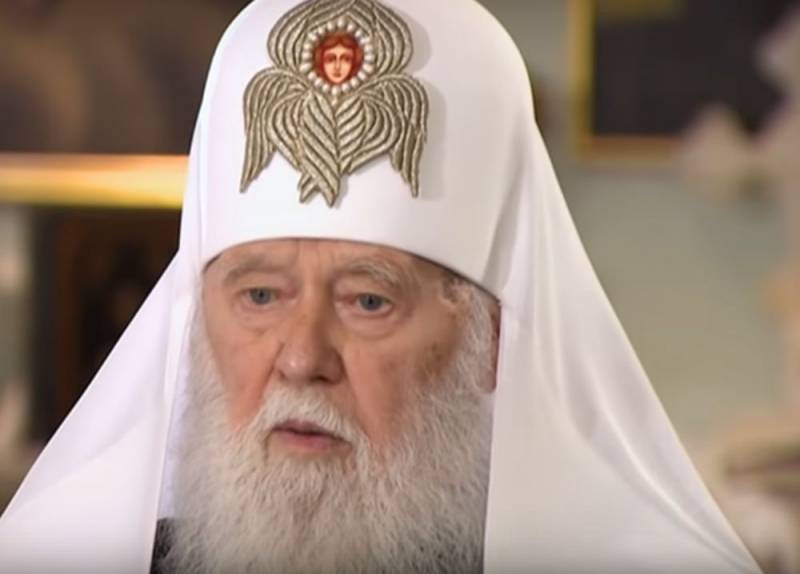 We didn’t agree that they would send me to rest!
Filaret lamented.

However, Filaret admitted that the deal was verbal, as he “trusted both Poroshenko and Epiphanius.”

And they cheated!
- Filaret was indignant.

Filaret said that if he knew that the situation would be exactly as it is now, then he would not have nominated Epiphanius for the post of head of the PCU. Moreover, Filaret accused Epiphanius of being “pleasing to Moscow,” because criticism from Russia did not sound at him.

Epiphanius, in turn, admits the existence of contradictions between him and Filaret. And since receiving the tomos and the formation of the PCU, in December 2018, Filaret and Epiphanius have not conducted a single joint service.
Ctrl Enter
Noticed oshЫbku Highlight text and press. Ctrl + Enter
We are
"Patriarch" Filaret spoke of a split in the new Ukrainian church
Filaret proclaimed himself "the patriarch of all Russia"
Reporterin Yandex News
Read Reporterin Google News
Ad
The publication is looking for authors in the news and analytical departments. Requirements for applicants: literacy, responsibility, efficiency, inexhaustible creative energy, experience in copywriting or journalism, the ability to quickly analyze text and check facts, write concisely and interestingly on political and economic topics. The work is paid. Contact: [email protected]
2 comments
Information
Dear reader, to leave comments on the publication, you must to register.
I have an account? Sign in