15 May 2019
0
On the night of May 14, 2019, a group of 10 people on motorbikes threw paint on the walls of the residence of the U.S. Ambassador in Athens (Greece), i.e. committed an act of outright vandalism. The residence of Ambassador Geoffrey Payette is located next to the US Embassy. The ambassador himself has already stated that he does not consider the “destruction of property” to be a peaceful protest and demanded the punishment of those responsible. 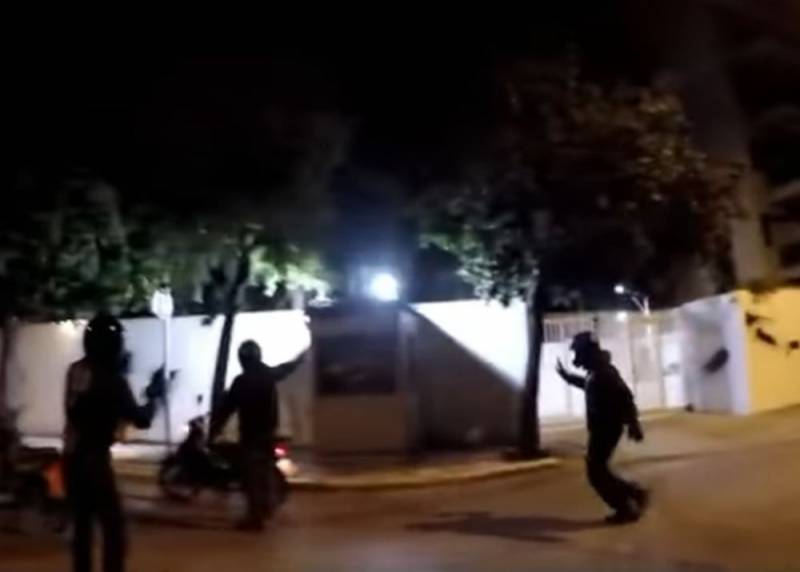 I woke up from another childish act of vandalism this morning outside the residence and will continue to work with the Greek authorities to punish the perpetrators in accordance with the law
He wrote on Twitter.

It should be noted that the Greek law enforcement agencies have already reported that they detained 8 suspects. However, it does not specify what relation these people have to the incident, whether they generally have and what is the role of each.

This is an unacceptable and irresponsible action, which, however, will not harm the friendship and ever-expanding cooperation between our two countries. Partnership based on common principles and values, for the benefit of our peoples
- stated from the Foreign Ministry of Greece and emphasized that they are making efforts to bring those responsible to justice.

Many Greeks are already openly mocking local officials. They believe that if Greece had the death penalty, then for the spoiled fence of the US ambassador, the local authorities would not regret their compatriots. Here's how zealously Athens began to wag its tail in front of Washington. For example, when a military grenade was thrown into a police booth in March 2019, near the Russian embassy in Greece, no such stir was noticed by local authorities.

By the way, the anarchists (left-wing radicals) from the Rubicon group have already taken responsibility for the attack on the residence of the US ambassador and posted the corresponding video on the Web. The recording was made by a camera mounted on the helmet of one of the attackers.


Anarchists explain their actions in response to US pressure in the case of the convicted (11 life term) Dimitris Koufontinas, to whom the Greek authorities refuse to grant another, seventh vacation. Anarchists are frankly outraged by the arbitrariness and argue that the holidays for convicts were "earned by blood" and are not a charity event. Moreover, all the demands of the authorities to Kufontinas, so that he would repent in writing and publicly of their deeds, the anarchists call "blackmail of the bourgeoisie"

The Rubicon group is very famous in Greece. She carried out dozens of all kinds of actions. Now they say that "US pressure will not work." It should be added that the Greek prosecutor's office really refused the next vacation to the head of the terrorist organization "November 17" Kufontinas. The "Revolutionary Organization of November 17" operated in Greece in 1975-2002. On account of her explosions, robberies, murders of 23 American, British and Turkish diplomats and military, Greek politicians and businessmen.
Ctrl Enter
Noticed oshЫbku Highlight text and press. Ctrl + Enter
We are
The United States has calculated how many terrorists remain in Syria
Why Germany refuses to pay Greece 300 billion euros of compensation
Reporterin Yandex News
Read Reporterin Google News
Information
Dear reader, to leave comments on the publication, you must sign in.