April 10 2019
1
It seemed to Donald Trump that the protracted and exhausting trade war that he unleashed with China was not enough - the next step, apparently, was the opening of the "second front" by the Americans. And, as usual, in Europe. The US president announced his intention to introduce duties of $ 11 billion on goods from the Old World, specifying that this would "put an end to the long-term use of the EU trade advantages at the expense of the United States." The intentions of the head of the White House were also confirmed in the US Trade Representation (USTR), so this is not another expressive tweet, but quite real plans. Well, what - raced ?! Now, our country would also not miss out on the prospects arising in this connection! 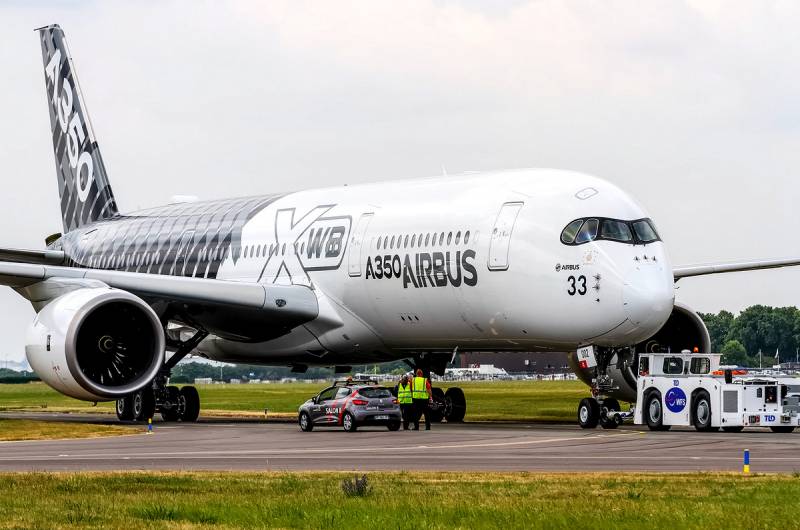 At the same time, USTR officials specified that the restrictions would be introduced as a response to the support that the European Union provided to the aircraft manufacturer Airbus. According to Washington, it led to "adverse effects" for the United States, and specifically for Boeing Co. The most remarkable thing is that not only motorcycles, but also wine and cheeses, and other food products of the local production are hit with European planes. Apparently, the most painful Trump and his team decided to “infringe” on France. I must say that the lawsuit on this issue in the World Trade Organization was conducted by US representatives since 2004. At the same time, the WTO sided with the Americans, deciding that the support of Airbus from the European Union was “unfair”, and some of the subsidies provided to it were “illegal”.

Nevertheless, they do not intend to give up, plead guilty and dutifully accept their own fate in the EU. According to reports, a worthy answer was spoken about just a few hours after Washington announced the ultimatum. At the same time, the Europeans promise that their countermeasures will be "much more extensive." First of all, the already “offended” Boeing will fall under them, and then how it will turn out. In any case, the list of future “sanctions products” from across the ocean in Brussels and other European capitals is already being actively discussed. The “Trade War” is flaring up to fame, and if you recall, for example, the recent intentions of Trump to “crush” the Old World automakers with customs duties of 20%, that is, there is every reason to expect that it will be very, very fierce. But it seemed so good that everything was going on - the European Commission was about to get a mandate to discuss with the United States the prospects for reducing customs duties ... It did not grow together.

Meanwhile, sensing the alluring smell of profit, the Chinese comrades are catching up on the topic. Bilateral China-EU Development Summit economic and trade relations between East and West, was scheduled for April 9 in advance. It's just that this meeting so "successfully" coincided with Washington's bellicose statements that, in the opinion of many analysts, it automatically made the topic of joint opposition to the attempts of American economic dictatorship the main topic at this summit. And if these two ends of the world unite against the United States, thereby refuting the poet's words that they will never converge, then the Americans will most likely have a hard time - even with all the economic might of their power.

For our country, everything that happens, clearly, is of undoubted benefit. The deeper and more painful the contradictions between the USA and Europe, the more there are, the better! In the end, everyone is well aware that at least 99% of the EU’s anti-Russian sanctions were not imposed on their own initiative, but exclusively supporting Washington. If this alliance does not just crack (which is already happening right before our eyes), but begins to fall apart, the life of Russia will definitely make this easier. Those who believe that this cannot happen in principle are deeply mistaken. Europe’s fatigue from the United States, and especially from its current leader, seems to be reaching its limit.

Let me give you a couple of very specific examples - from the most recent. Just as last month, the Bundestag Vice President Wolfgang Kubicki called on German Foreign Minister Heiko Maas to “immediately declare US Ambassador Richard Grenell persona non grata” and send him out of the country. The reason for such a harsh statement was that the American diplomat, according to the German policy, behaves in sovereign Germany, "as the commissar of the occupying forces", constantly criticizing government policies and interfering in matters that are completely outside his competence. No less decisively at about the same time, the president of neighboring Austria, Alexander van der Belen, made a direct statement: “Europeans do not need to dance to the trump pipe!” According to the head of state, American pressure on Europe "goes too far" and, especially - in matters of "energy security". There is already a direct reference just to cooperation with Russia. Specifically, to Nord Stream-2, from which Austria, like Germany, expects to have serious economic benefits.

I deliberately cited precisely these examples, citing not ordinary European politicians, but the top officials of the states. Washington, having played in the “sanction wars”, which is already being launched with almost the whole world, stubbornly refuses to allow even the thought that it could suffer a crushing defeat in them. Well, every mistake of the USA, every mistake of the White House in foreign policy is, by definition, a victory for Russia. Every kick Washington is trying to weighed against its allies pushes them toward Moscow. So - let it continue in the same vein!
Ctrl Enter
Noticed oshЫbku Highlight text and press. Ctrl + Enter
We are
US Global Economy: An End That Sneaks Noticeably
Three years left: Ukraine will be sold in parts
Reporterin Yandex News
Read Reporterin Google News
1 comment
Information
Dear reader, to leave comments on the publication, you must sign in.