Tsar Engine: is the RD-171MV the most powerful in the world?

March 31 2019
9
Tsar Engine is exactly what a number of media call the promising Russian liquid-propellant rocket engine, a video about which was recently presented at Roscosmos. The analogy with “Tsar Cannon” and “Tsar Tank” is rather strange, considering that neither one nor the other showed himself in any way for its intended purpose. That is, in battle. And any rocket engine after all is a purely utilitarian product that is unlikely to become a monument to the human mind or, conversely, stupidity (although figuratively speaking, it is possible both of these). 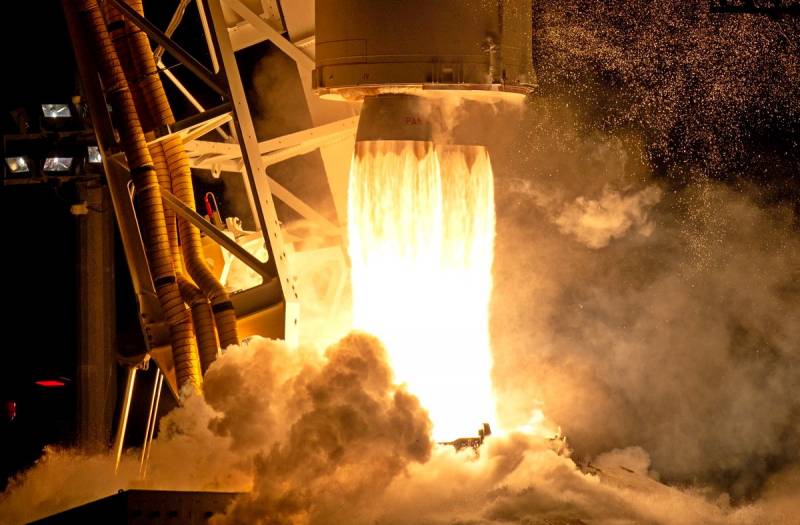 By the way, the space department chose a rather strange musical series, so it’s not so easy to watch the video to the end. But if you remove the annoying melody, then by the standards of Roscosmos - a completely high-quality media product. Here is a good animation, and a demonstration of production processes, and comments by designers. Alas, this is not enough for a real revolution in the field of engine building.

Let's start with the most important. RD-171MV should be at the forefront of the concept of the promising Irtysh rocket, which was previously known under the somewhat strange name Soyuz-5. Why weird? The fact is that the new missile will not be directly related to the Soviet "Union". Rather, it is the modern reincarnation of Zenith, where some technical solutions of the previously closed Rus project will also be embodied. Irtysh itself is, without exaggeration, the main hope of the Russian space industry. And potentially the main Russian carrier rocket of the future, for at least another 50 years. This, of course, provided that it is created.

It is already known that in addition to using the Irtysh in the first stage, the RD-171MV engine also intends to use the first stage of the promising Russian Yenisei rocket, which is seen as an instrument of conquering the Moon in the future. In Russia. In America, landing on the moon will be carried out with the help of other carriers: so far, the States are not eager to include Russia in a new lunar orbital project.

Roughly speaking, the RD-171MV is the basis of the entire Russian cosmonautics of the future. Unfortunately, there is nothing revolutionary in the broad sense of the word. We will analyze in order. Perhaps the first thing to talk about is “heredity”. The RD-171MV engine is the next version of the Soviet RD-170, which began working on it in 1976. It was created for the Energy rocket, which was to become part of the Energy-Buran complex. Quite simply, the engine was supposed to launch a Soviet shuttle in space - an analogue of the American shuttle. The collapse of the USSR was buried by the ship itself and a huge rocket. But the engine not only survived them, but also spawned a whole family of different products, one of which, RD-180, is still used by Americans at the first stage of their Atlas V rocket, although they no longer plan to purchase Russian products in the future (as it will actually be - time will tell).

RD-171MV itself, like its distant ancestor, is a closed-cycle liquid rocket engine. It has four combustion chambers, and uses a pair of oxygen-kerosene. As of 2019, this is not a “tragedy”, but in the near future there will be new engines that focus on the potentially more successful in almost every sense fuel pair liquefied natural gas / liquid oxygen. The brightest representative is the promising Spacetor Raptor. One can also recall the BE-4 from Blue Origin, which they want to install immediately on two promising American reusable missiles: Vulcan and New Glenn. 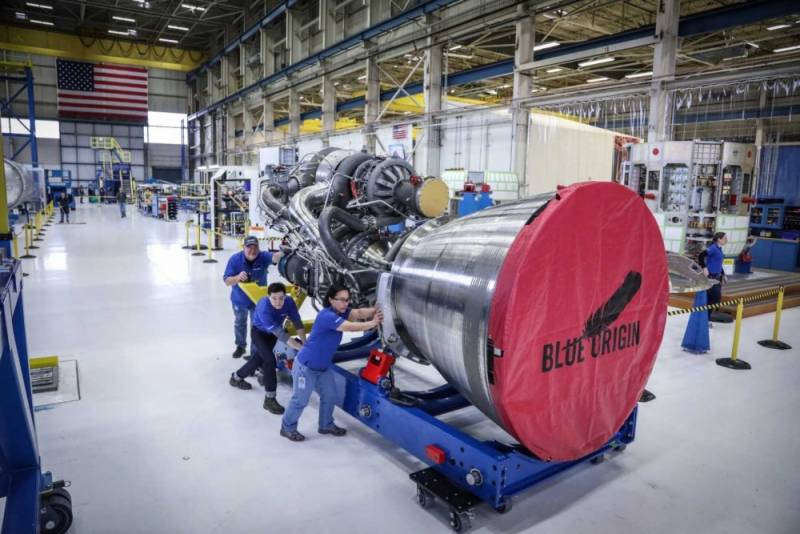 Let us return to the thesis that the RD-171MV series in Roscosmos is the most powerful among the existing rocket engines. Is it so? On the official channel of the department, they directly state: “the most powerful in the world - 246 thousand horsepower. With a mass of 10 tons, engine thrust will exceed 800 tons. ” And further: "a turbopump unit develops a capacity of 180 thousand kilowatts, which corresponds to the capacity of three nuclear power plants of the largest icebreakers." “The RD-171MV engine will indeed be the most powerful in the world,” said Igor Arbuzov, Director General of NPO Energomash.

Is it a lot or a little? It depends on what you compare it to. The Merlin 1D + rocket engine for Falcon 9 FT and Falcon Heavy missiles has a draft at sea level of 845 kilonewtons or 94.981778 ton-forces. It would seem that the superiority is huge. But do not forget that the "Merlin" has a mass of less than 500 kilograms. That is, he is in a completely different weight category. The low mass allows the installation of 27 “Merlin” on the Falcon Heavy, so the “collective engine” of this rocket is much more powerful than the one that will be on the Soyuz-5. Now, recall, Falcon Heavy is generally the most powerful of all existing launch vehicles.

But these are all conventions. More important than another. If we talk about the dry power of one product, as such, then the leader is the Solid Rocket Booster engine, which was used for shuttles, and will now be used for the new American superheavy Space Launch System rocket. One such accelerator has a starting thrust (at sea level) of approximately 12,45 meganewtons or, in other words, 12450 kN. 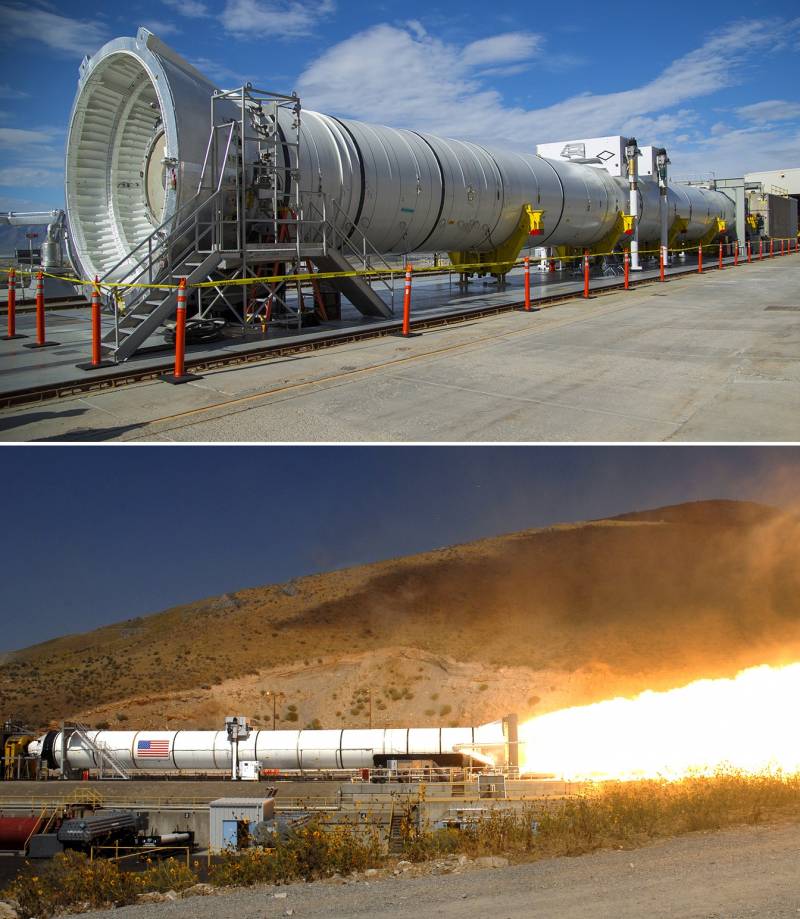 In other words, Rogozin’s department was mistaken in calling the RD-171MV the most powerful. RD-170 and its modifications are still very efficient rocket engines and are deservedly among the best. However, due to age, it is objectively difficult for them to claim any world-wide records. Purely conditionally, the RD-171MV can be called the “most powerful liquid-propellant rocket engine,” but for some reason Roscosmos did not begin to make such clarifications. Probably, it didn’t look so beautiful from the outside. 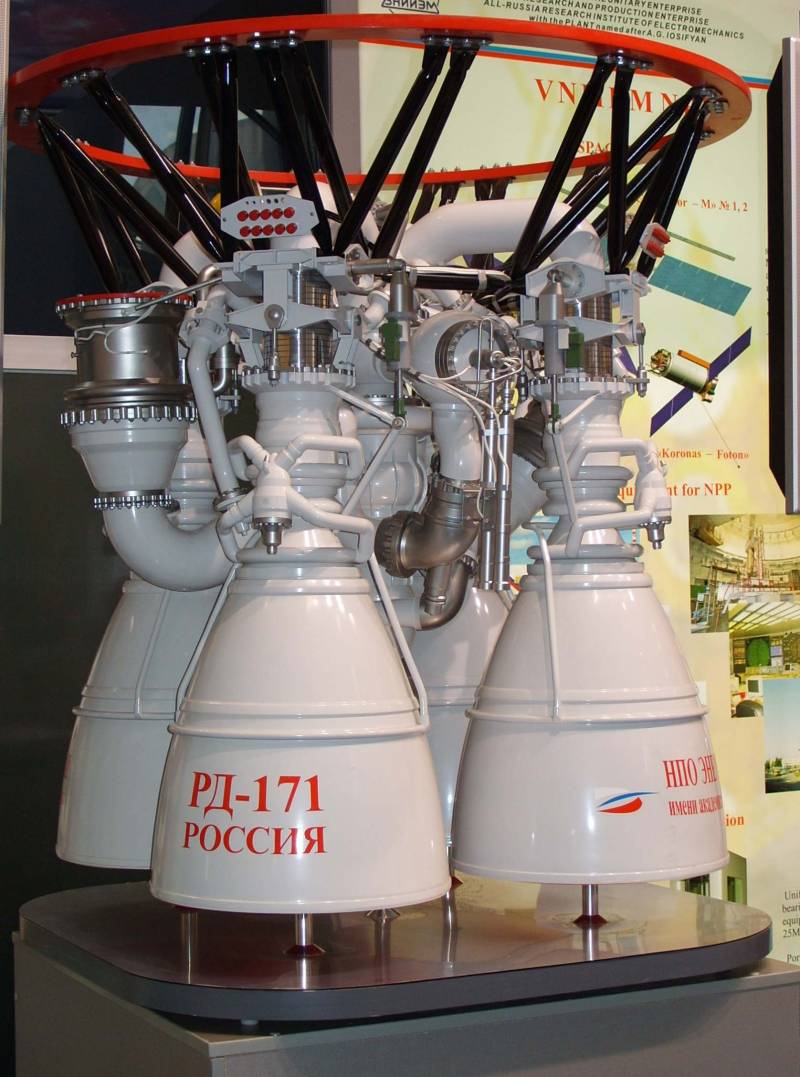 On a new engine - into a "fabulous" future

In conclusion, I would like to note that the best option for Russia would be to study new areas of engine building. Instead of mega-projects such as Don and Yenisei missiles, one could focus on the development of a fundamentally new methane engine, especially since one of such developments is already being carried out in the country. “The engine is called RD-169. This is actually a new engine, created on the basis of the knowledge that we have formed since the beginning of the 2000s, ”said Igor Arbuzov, mentioned above, last year. Moreover, according to him, other countries have already shown interest in the development. “Our Chinese colleagues are very interested in the joint development of a methane engine. We are considering such an option as the possibility of attracting additional investment in the creation of a methane engine, followed by, as an option, a license agreement for its production in China, ”the specialist added.

But work in new directions does not always imply loud slogans. But it’s very nice to say “we already have the most powerful engine in the world”, instead of saying something like “we will try to catch up with Blue Origin and SpaceX”. To pay for such shortsightedness with the prestige of the country will have in the future.
Ctrl Enter
Noticed oshЫbku Highlight text and press. Ctrl + Enter
We are
Trillion "Baby": Why Russia needs a super-heavy Yenisei rocket
Russia is preparing a revolution in the aircraft engine industry
Reporterin Yandex News
Read Reporterin Google News
9 comments
Information
Dear reader, to leave comments on the publication, you must sign in.