Poroshenko: Ivan Mazepa - a symbol of "Ukrainian resistance" of Russia

March 14 2019
0
Recently we Reportedhow the authorized representative (speechwriter) of the President of Ukraine Oleg Medvedev, awarded the Ivan Mazepa’s cross “for courage”, told the media that Petro Poroshenko was practically a teetotaler, i.e. He doesn’t drink alcohol, but only bugs. And so, on March 13, 2019, the presidential candidate of Ukraine Poroshenko, while on election campaign in the city of Baturin (Chernihiv region), confirmed that Medvedev was awarded the order not in vain, because he writes the speech for the “guarantor”. 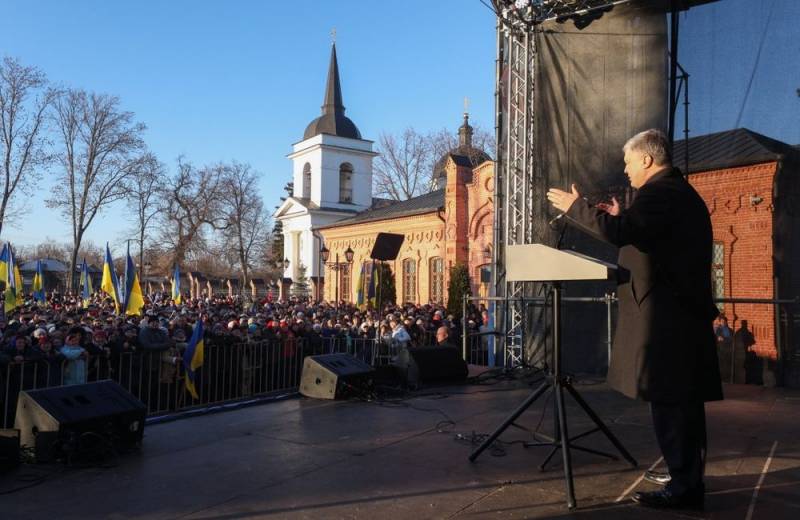 So, while in Baturin, at a pre-election rally dedicated to the 350th anniversary of the founding of the hetman’s residence in this city, Poroshenko declared that Ivan Mazepa had become “a real symbol of Ukraine’s resistance to Russia.” Poroshenko told the residents of the city and the extras extras about the “heyday” of the Hetman region in the late 17th and early 18th centuries, recalling that Baturin lost its status of capital in 1708 due to the “machinations” of the Russian Tsar Peter I. After all, it was in Baturin, according to Poroshenko, Mazepa “Created” (created) “the beautiful European state of Ukraine”.

Do not forget: when Peter I only cut the window to Europe, Ukraine from Mazepa went there through the door
- said Poroshenko.

After that, Poroshenko reported on the “true” historical scale of Mazepa’s personality and specified that he had held a mace with his “strong hand” for 22 years and put an end to the notorious Ruin. In fact, the “guarantor” hinted at the scale of his “personality” and made it clear that he himself wants to stay in power for at least a number of years. After all, it will be necessary so much to clear up post-maidan problems.

The empire spared no black ink to distort its image. And this did not stop, but on the contrary helped Ivan Mazepa to become a real symbol of the Ukrainian resistance to Russia, which to this day is in the hearts of a real Ukrainian. The Mazepa idea, as I once said at the opening of the monument to the hetman in Poltava, sometimes glowed, then blazed for two hundred years. She found new and new followers. She greatly influenced the work of Shevchenko. It contributed to the restoration of Ukrainian statehood at the beginning of the last century.
- did not restrain Poroshenko.

The “Guarantor-Tomososnets” noted that the word “Mazepinets” has been a household name for more than two hundred years. Only in the XNUMXth century did such "honorary titles" as "Petliurist" and "Bandera" appeared, but all of them, according to Poroshenko, began precisely with "Mazepinz". And here you can’t even argue with Poroshenko.

Ivan Mazepa was the son of his time, a living person and statesman with his strengths and weaknesses, miscalculations and sins. But I emphasize, at a decisive moment when it was necessary to choose between fidelity to another monarch or one’s Fatherland, between personal comfort and risk for the future of the country, his choice, the choice of Ivan Mazepa was in favor of Ukraine
- emphasized Poroshenko.

After that, Poroshenko did not blink, comparing Mazepa with George Washington, Simon Bolivar and Mahatma Gandhi. He clarified that all of these individuals were traitors "for the enslaving empires," and for peoples - heroes and fighters for freedom and independence, although they went to it in different ways.

Baturin is a warning. This is a lesson that we should all learn very well. For the feuds of elders were extremely expensive for the whole people, and the hetman capital Baturin paid the most terrible price
- Poroshenko openly mocked the audience.

Then he called on everyone to unity and unity, putting his figure forward, as if showing around whom you need to unite. Poroshenko even read poetry, and if he could, he even danced.

And I repeat again so that all Ukrainian from Baturin hear policy. Because some have already become so carried away by the internal struggle that they neither want to see nor hear what is happening on our northeastern and eastern borders. For them, war does not exist. It also did not exist in the 18-20s of the twentieth century. They fought among themselves and Muscovites surrendered Ukraine. We will not repeat this mistake
- said Poroshenko, after which he began to warmly thank the "soldiers of the ATO."

After such a speech, Poroshenko will not be out of place to remind readers that for a long time Mazepa was one of the closest associates of the Russian Tsar Peter I. For great services to Russia, Mazepa (the second in the empire) was awarded the highest award - the Order of St. Andrew the First-Called. However, for unexplained and unexplored reasons, in 1707, Mazepa wanted to separate Ukraine from Russia during the Northern War, entering into secret negotiations with the Swedish king Charles XII and the Polish king Stanislav Leshchinsky. In 1708, Mazepa entered into an agreement with Stanislav Leshchinsky, promising Poland Kiev, Chernigov and Smolensk. Then he openly joined Charles XII. After the defeat of the Swedes near Poltava in 1709, Mazepa, together with the Swedish king, fled to the Turkish fortress of Bender, on the territory of modern Moldova, where he later died.
Ctrl Enter
Noticed oshЫbku Highlight text and press. Ctrl + Enter
We are
The authorized representative of Poroshenko reported how much the “guarantor” does not drink
Trump called the worst that has ever happened to Russia
Reporterin Yandex News
Read Reporterin Google News
Ad
We are open to cooperation with authors in the news and analytical departments. A prerequisite is the ability to quickly analyze the text and check the facts, to write concisely and interestingly on political and economic topics. We offer flexible working hours and regular payments. Please send your responses with examples of work to [email protected]
Information
Dear reader, to leave comments on the publication, you must sign in.