Kiev "suddenly ripe" for the exchange of prisoners before the election

March 13 2019
0
On March 13, 2019, after the next (104th) meeting of the trilateral contact group (TAG) in Minsk, Irina Gerashchenko in her Facebook erupted with further loud accusations against Russia and a portion of Ukrainian “patriotism”. She, the first vice speaker of the Verkhovna Rada of Ukraine, is the representative of Kiev in the humanitarian subgroup in the Donbass. 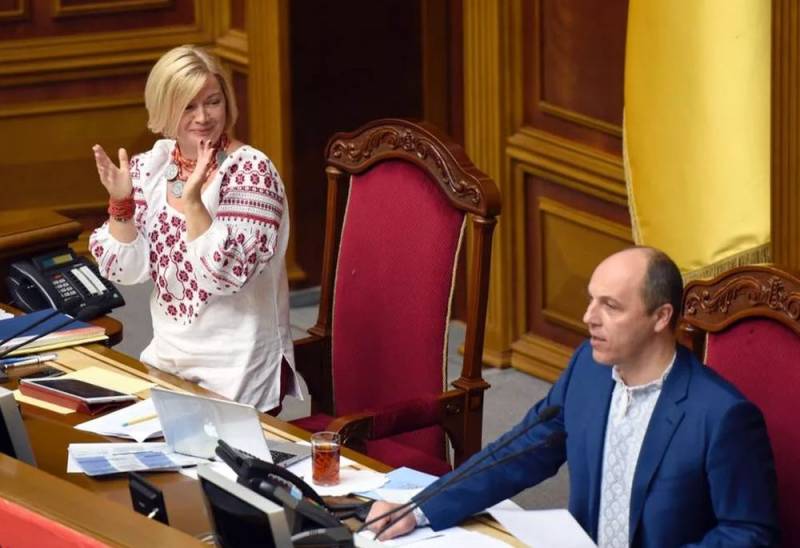 First, Gerashchenko touched on the topic of the presidential election in Ukraine and said that the position of Moscow and the “controlled puppets” (DNR and LC) is “not restrained and vulgar.” After that, she once again accused Russia of deliberately disrupting the work of the humanitarian group, adding that Kiev refused to communicate directly with Lugansk and Donetsk.

Blackmail Ukraine WILL NOT!
she wrote, moving on to the requirements.

Gerashchenko emphasized that the TKG provides for the following format: Ukraine - Russia - OSCE. After that, she demanded that Russia begin to participate more actively in the work of the humanitarian group and implement the Minsk agreements, rather than shirking responsibility for the humanitarian catastrophe and illegal detention of political prisoners, prisoners of war and hostages. And she clarified again that Kiev will not communicate with the “Kremlin puppets”, i.e. direct dialogue will not be.

We expect the Kremlin to respond to our proposals to exchange Kremlin political prisoners for Russians convicted in Ukraine and to unblock the process of releasing hostages from occupied Donbass, where everything is decided by the FSB, not the Kremlin’s puppets
- wrote Gerashchenko.

Moreover, Kiev categorically objects to any attempt to use unacceptable terminology in documents or discussions. This refers to the DNI and LC. The Ukrainian side insists on the use of the phrase "separate territories of Ukraine", as described in the Minsk agreements.

Fifth: we accuse the Russian Federation and their puppets not only of systematically disrupting the work of the group, but also of the cynically blocked process of releasing hostages and political prisoners and recall that there is NO answer to our 15 offers of release. The Russian Federation abandoned its citizens, the Ordlo does not confirm to us information about dozens of hostages. The Ordlo includes Russian citizens on its lists, claiming that they are “militias of the republics,” which the Russian Federation itself does not recognize
- claims Gerashchenko.

She added that in April 2019, the OSCE SMM coordinator Tony Frisch plans to visit prisons in the DPR and LPR. And Kiev insists that the OSCE representative be allowed to all detained persons. Gerashchenko is outraged that the detainees have not been allowed to write letters, receive parcels and call relatives for a long time. And only after all of the above, she approached the key issue - unlocking exemptions, i.e. exchange.

Gerashchenko said that Kiev was ready to transfer to Moscow, within the next few days, 25 Russians and pardon 72 "separatists" in exchange for 19 civilians and military held in the DPR and LPR.

It should be recalled that the previous exchange of prisoners in the Donbass took place in December 2017. What Gerashchenko did all this time and why she remembered the possibility of an exchange only for the presidential elections in Ukraine, she did not write.
Ctrl Enter
Noticed oshЫbku Highlight text and press. Ctrl + Enter
We are
Ukraine is going to squeeze Russia out of international structures
Kiev is trying to cheat in the exchange of prisoners
Reporterin Yandex News
Read Reporterin Google News
Information
Dear reader, to leave comments on the publication, you must sign in.