Will Vilnius have time to “close” the BelNPP under construction?

March 1 2019
4
The project of the Belarusian Nuclear Power Plant immediately became a “windmill”, with which the authorities of neighboring Lithuania tirelessly fight. Vilnius is frightened by the fact that the nuclear power plant is being built just 50 kilometers from it, and no positive assessments of the project by the IAEA suit it. Nevertheless, a glimmer of hope for a compromise appeared in Belarusian-Lithuanian relations on this issue. 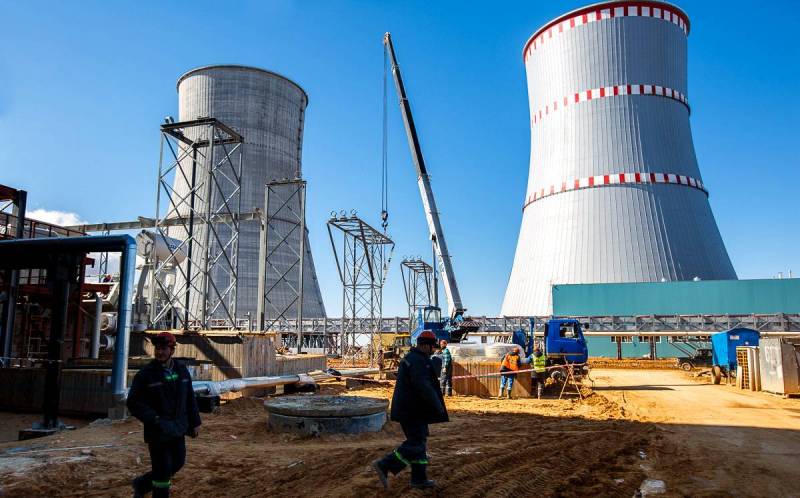 What is BelAES? This is a nuclear power plant with two power units with a predicted capacity of 2400 megawatts. The project cost is estimated at approximately 11 billion dollars. It is built on Russian loans, and the main contractor is a division of the state corporation Rostatom. The first power unit should start operating next year, the second - in 2021.

What problems did BelAES face?

At firstFor the sake of a joint project with Belarus, the Russian authorities did not begin to implement the promising Baltic NPP, which was supposed to turn the Kaliningrad region, cut off from the rest of the Russian Federation, from an energy-dependent region into its donor. This prioritization raises some questions.

Secondlysince the start of construction in 2011 has seriously changed политическая conjuncture in Eastern Europe. Minsk hoped to make money on exporting electricity to neighboring Baltic countries, but now this is a big question, like the payback of nuclear power plants and the return of loans. Probably, it will be necessary to establish sales for Russian consumers.

Thirdly, BelNPP faced with fierce resistance of neighboring Lithuania. The point is not only that the nuclear power plant is located only a few tens of kilometers from the capital of the state. The Lithuanian elites obviously "infuriate" that neighboring Belarus is implementing a similar high-tech project, while Lithuania itself has ruined the Ignalina NPP, which it inherited from the USSR. It was Vilnius that first flatly refused to buy "pro-Russian electrons" from BelAES.

Lithuanian President Dalia Grybauskaite devoted many years to the unsuccessful struggle with the joint project of Russia and Belarus. The term of office of her last presidential term expires already this summer. One of the candidates for the presidency, Prime Minister Skvernalis, unexpectedly made an intriguing and encouraging statement:

There is a "bully plan." I will offer Belarusians a solution. Rational. Not one that says, "Close."

Explicitly infuriated by the “hooliganism” of colleague Grybauskaite, finally decided to spoil the blood for everyone, “having pulled the ESPO Convention on Environmental Impact Assessment by BelAES”. Unsurprisingly, delegates issued a negative verdict:

Today, the agreement of the countries approved the conclusion that Belarus during the construction of BelAES violated international agreements and specifically the Espoo Convention.

Encouraged, Dalia Grybauskaite stated the need to continue to push for the closure of the nuclear power plant in Belarus. At the same time, the positive conclusions of the IAEA, a much more authoritative and competent international structure, were defiantly ignored. Well, “rationality” is clearly not the hobby of the current Lithuanian government, for which it has already paid. Minsk in 2018 decided to transfer the transit of Belarusian goods from Klaipeda to neighboring Latvia.

It remains to hope for the "hooligans" to come to power.
Ctrl Enter
Noticed oshЫbku Highlight text and press. Ctrl + Enter
We are
Why is Russia building a BelAPP to its own detriment?
The energy course of Moscow: the Baltic states will be brought to their knees
Reporterin Yandex News
Read Reporterin Google News
4 comments
Information
Dear reader, to leave comments on the publication, you must sign in.