Tymoshenko has become a leader in the presidential race in Ukraine

January 28 2019
1
It became known that the leader of the Fatherland party, Yulia Tymoshenko, is the leader in the race for the most important seat in Ukraine. In the presidential rating, as a candidate in the elections, she already has the greatest support from voters. In any case, from among those who have already decided who they will vote for, if they go to the polls. This was announced at a press conference on January 28, 2019 by Yuri Lesnichy, who is the director of a specific structure under the loud name "Institute for Analysis and Forecasting." 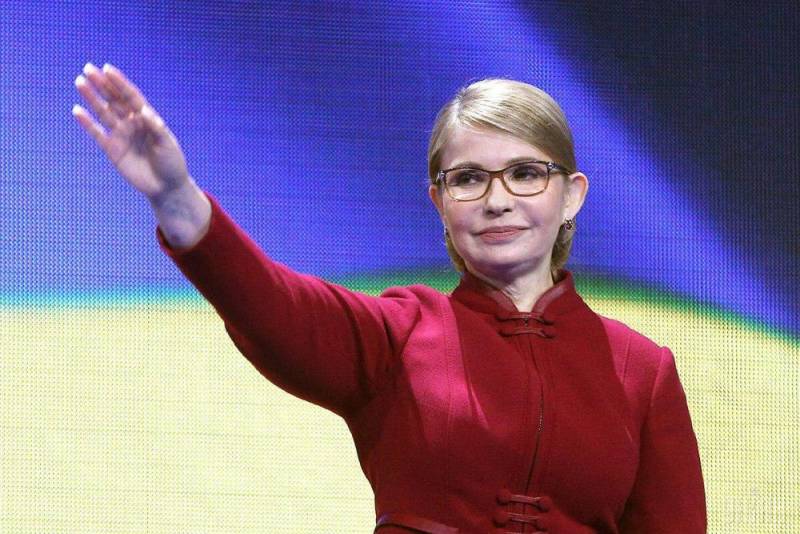 So, according to Lesnichy (whose “institute” is engaged in all kinds of polls), if the elections were held “this Sunday”, then 20,2% of voters “among those who decided and intends to vote ”. However, in general, only 14,1% of the total number of voters support it, i.e. citizens of the country with the right to vote.

In second place in the ranking is showman Vladimir Zelensky, for whom 12,6% of those who decided, or 8,8% of the total number of voters, are ready to cast their votes.

Third and fourth places are shared: Yuriy Boyko from the Opposition Platform - For Life and the current president of Ukraine Petro Poroshenko. For each of them 11,9% of the voters who were determined are ready to vote, or 8,3% of the total.

Fifth place is occupied by the leader of the Civil Initiative party Anatoly Gritsenko. He is supported by 10,7% of the number of those who decided or 7,5% of the total number of voters.

We remind you that the presidential election in Ukraine should be held on March 31, 2019, and if none of the candidates receives more than 50% of the votes of the number of people who participated in the elections, then the second round will be held on April 21, 2019.

It must be added that the personality of the “expert” is very well known among Ukrainian patriots. In 2002, Yuri Lesnichy graduated from Taras Shevchenko National University of Kiev and became a master of journalism, and later reached international law. Trained in Stockholm (Sweden) under the European policy and democratic institutions ”(2005), and then in Copenhagen (Denmark) under the program“ Local Government: European Experience ”(2010).