The Northern Sea Route may become not only Russian

December 18 2018
4
A lot has already been said about the prospects for the development of the Northern Sea Route. Due to the melting of polar ice, this waterway in the foreseeable future can be a serious competitor to the Suez Canal, because the speed of delivery of goods from Asia to Europe via the NSR is much higher. In 2017, 7 million tons of cargo out of 10,691 million were transported along the Northern Sea Route using Atomflot. In just a couple of years, it is expected to reach the level of 40 million tons, and in 2024, according to the plans of President Putin, all 80 million tons. Of particular importance is the increase in exports through the NSR of the Yamal LNG to the Asia-Pacific countries. 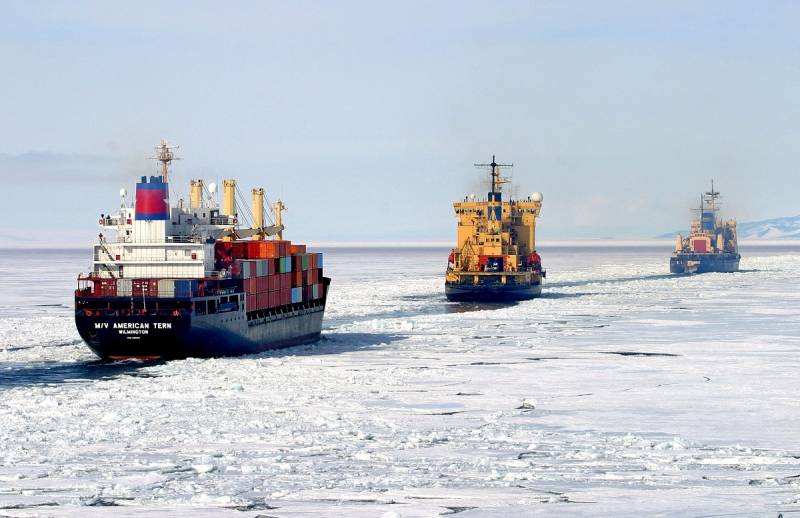 In short, the prospects are exciting. It is not surprising that many countries have begun to show increased interest in the Arctic, which is geographically and historically in the sphere of special influence of Russia. The US is building new icebreakers and preparing the navy for operations in the Far North. China, not the most arctic power, also set about building its own icebreaker fleet. To maintain leadership in the region and successfully compete with the leading world powers, Russia will need to invest huge sums of money, and it should be as effective as possible. In this regard, the recent decision of our authorities to transfer control of the Northern Sea Route from the Ministry of Transport to the state corporation Rosatom raises big questions.

The backstage fight for the NSR has been going on for a long time. They defended the transfer of control over the promising waterway of the state corporation Dmitry Rogozin, he was supported by the head of government Dmitry Medvedev, and the decision of President Putin was influenced by the position of the head of his Administration, Sergei Kirienko, who, incidentally, was the head of Rosatom for a long time. As a result, the Northern Sea Route “sailed away” from the hands of the relevant ministry.

So why does this decision by the authorities look mixed?

On the one hand, Rosatom is objectively one of the most successful Russian state corporations. She was able to preserve most of the Soviet scientific and industrial heritage, and has a lot of successful projects abroad. The nuclear industry is one of the main pillars on which claims to consider the Russian Federation a great power are based.

On the other handand there are spots in the sun. Where there is big state money, there is corruption. On the Web, you can find data that this problem has not spared Rosatom. After gaining control over the Northern Sea Route, the corporation’s leadership will receive the functions of the main recipient and manager of the enormous funds allocated by the state for the development of the Arctic, as well as the administrator of the income from the operation of the NSR. Also, Rosatom will hold tenders for concessions and determine the winners who will use the budget money for the development of the Arctic infrastructure.

The state, as represented by the Ministry of Transport, will now only have “over-farm” functions, not so much even control as “instruction”: determination of icebreaking assistance rules, assignment of port charges, etc.

Optimists will say that a successful state-owned corporation can make SMP successful. Pessimists say otherwise. The most pessimistic forecast is as follows: after a while, the leadership of Rosatom, under the slogan “attract three private rubles per state ruble,” makes a decision on corporatizing the Northern Sea Route for its more efficient development. With such a development of events, the emergence of Chinese co-owners at the SMP will not be strange. However, we will not exaggerate in advance, for sure everything will be fine.
Ctrl Enter
Noticed oshЫbku Highlight text and press. Ctrl + Enter
We are
Northern Sea Route risks never opening
Can Russia “stop” the Suez Canal?
Reporterin Yandex News
Read Reporterin Google News
Ad
We are open to cooperation with authors in the news and analytical departments. A prerequisite is the ability to quickly analyze the text and check the facts, to write concisely and interestingly on political and economic topics. We offer flexible working hours and regular payments. Please send your responses with examples of work to [email protected]
4 comments
Information
Dear reader, to leave comments on the publication, you must sign in.