KAMAZ without you: Russia will become part of an unmanned auto-revolution

December 11 2018
2
Unmanned vehicles have not yet said their weighty word. Still to come. 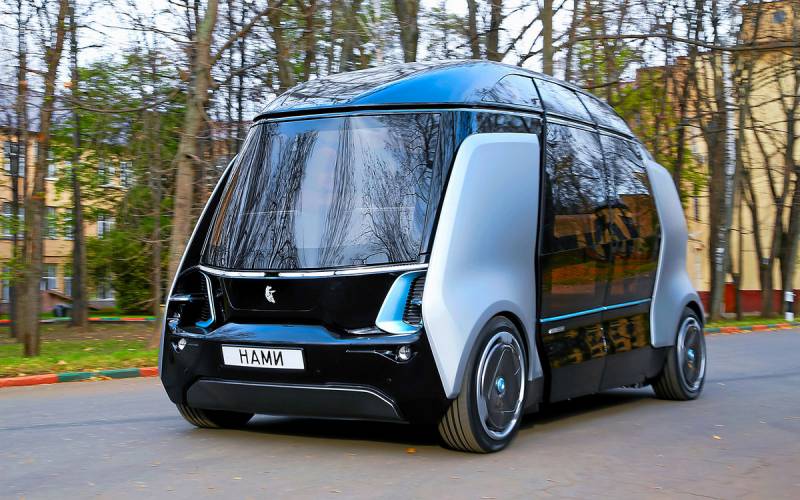 An unmanned vehicle is not a universal program that can be installed on any vehicle. Now it is a complex and expensive set of various sensors and cameras, which usually includes: lidar, satellite navigation system, stereo vision system, gyro stabilizer and a number of other systems and subsystems.

Nevertheless, you are unlikely to find a large company in our time that would not experiment with the creation of unmanned vehicles. These are General Motors, and BMW, and Audi, and Volkswagen and Nissan, and many others. The scale of the phenomenon is such that a number of serious research organizations have already managed to "bury" the profession of a driver. Theoretically, taxis, buses, and even large trucks can do without it (partially or completely). 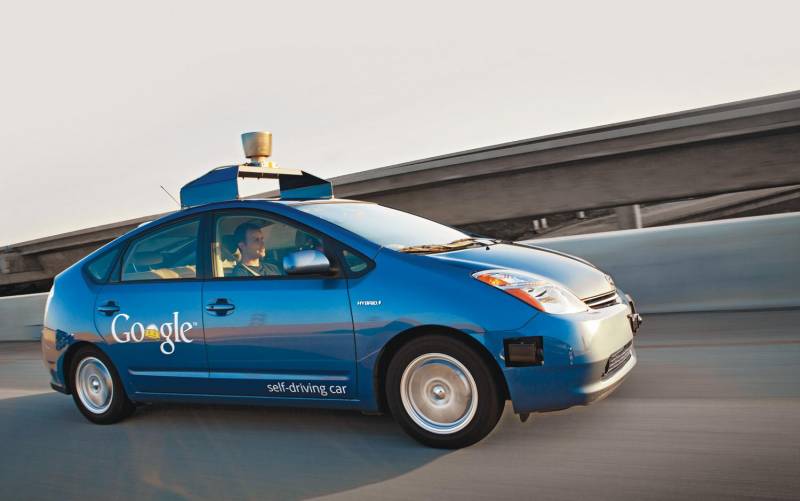 In practice, everything is somewhat more complicated. And the problems faced by the creators of unmanned cars are very, very many. On the one hand, with the help of drones, it will be possible to permanently get rid of such a problem as the human factor. According to American scientists, traffic jams will be significantly less, even if only five percent of the cars will be unmanned. Researchers believe that cars without drivers will be able to overcome the so-called "phantom traffic jams." We are talking about some obstacles on the road that continue to interfere with traffic, even when they de facto disappear. But there is a "dark side". UAVs are still too sensitive to any objects and objects along the line. Sometimes they see danger where it does not exist. At the time of 2014, Google cars could not recognize temporary traffic signals. And they could not distinguish policemen from pedestrians or pieces of dirt from stones. All this raises uncomfortable questions, especially if a large number of drones have to interact with a large number of controlled vehicles. But, in fact, this is what will become the new era of road transport. So to speak, the point of no return.

Unmanned Technology for trucks have their differences and their characteristic difficulties. Back in 2016, Otto, which is owned by Uber, first used one of its unmanned trucks for commercial cargo delivery. Allowing the program to drive heavy vehicles within the city would be shortsighted. Therefore, in the city limits, the driver drove the car. However, after leaving the highway, he left control of the AI ​​truck, moving to the back of the cab. However, it should be said that the route was agreed in advance with the authorities of the state of Colorado, and the patrol officers followed the truck along the entire route. 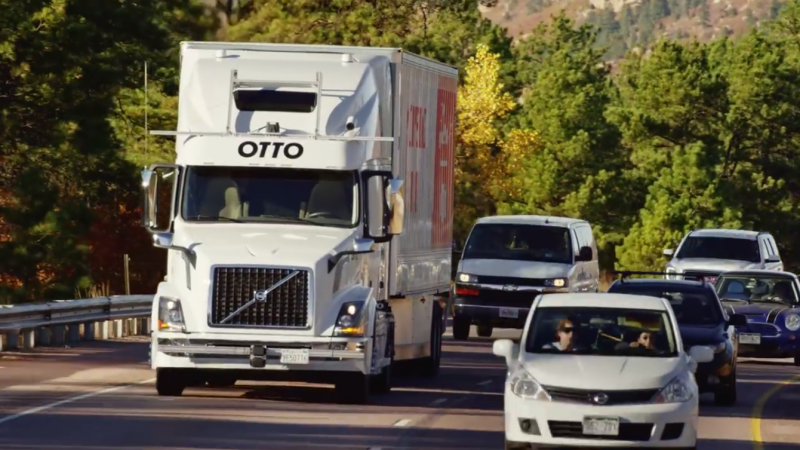 The history of KamAZ's creation of unmanned vehicles is much longer than it might seem at first glance. Back in 2015, it became known that in the bowels of the company they hatched plans to create a drone truck. To be more precise, it was a joint development, where software development fell on the shoulders of Cognitive Technologies.

In the summer of 2018, it became known that KamAZ began the final stage of the Odyssey project, in which they develop a test route for unmanned trucks for in-plant transportation. A prototype of such a car has already been made: the diesel truck KamAZ-43083 has acted as a base. At the same time, it was reported that drones would be able to transport components from a press-frame to an automobile plant without human intervention. For the movement, they chose the existing in-plant roads. “UAVs will cruise both inside KamAZ and between its 6 plants. “All trucks will drive in the industrial zone. These roads are also considered common. We’ll launch it both inside KamAZ and in transportation between plants, ”said Oleg Afanasyev, spokesman for Kamaz PJSC. We intend to start test transportation in early 2019. 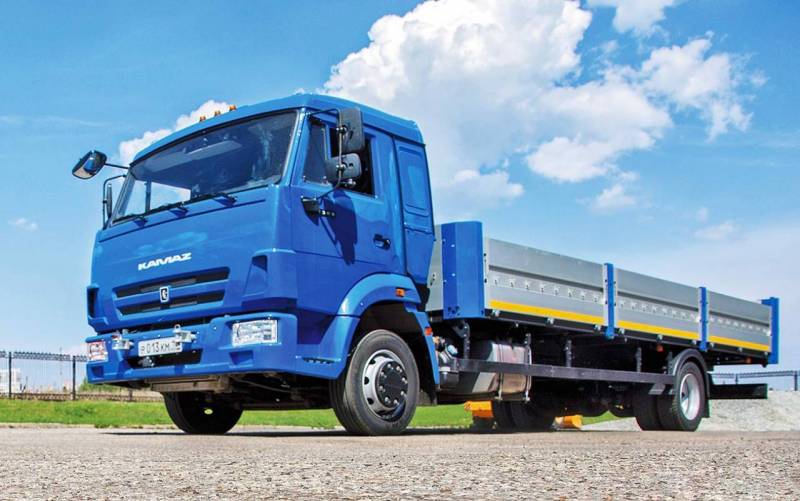 It is noteworthy that previously a number of media outlets (moreover, quite respected ones) disseminated information that the KamAZ unmanned vehicle during the tests "crashed into the workshop, completely destroying it." However, the company itself hastened to refute this alleged incident. Yes, and it sounds, to put it mildly, quite strange. It is unlikely that the speed of the truck and the force of the impact would completely destroy the large structure.

Much more media attention is now attracted by the SHATL (Widely Adaptive Transport Logistics) electric unmanned bus, which KamAZ presented at the Moscow International Motor Show in 2016. First of all, the futuristic design of the vehicle is striking. Shuttle fired from scratch. The company developed the concept of an unmanned bus in partnership with the Central Scientific Research Automobile and Automotive Institute NAMI. Russian engineers replaced the driver with a fully autonomous driving system. It, in particular, includes a central processor, radars, four video cameras, two stereo cameras from Mobileye and much more. 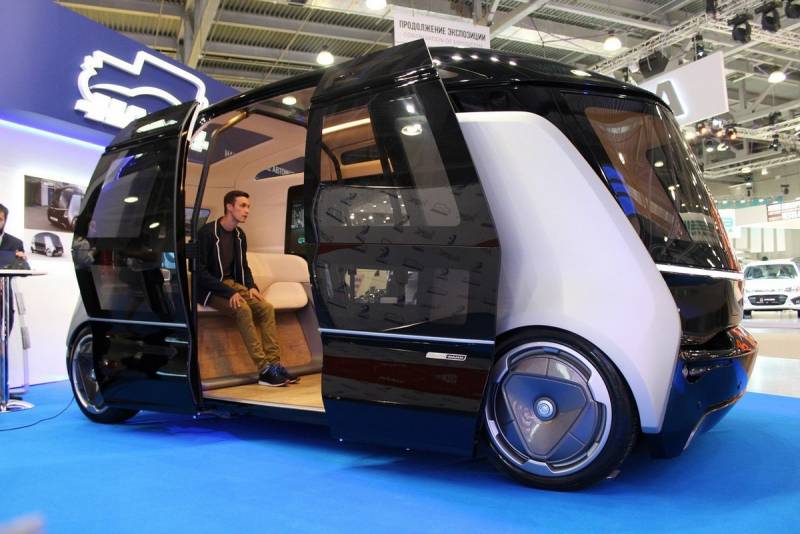 The vehicle is 4,6 m long, 2,5 m high and 2 m wide. The bus can carry up to twelve passengers. The car can accelerate to 110 km / h. The car received a 96-kilowatt engine and a 35-kilowatt-hour battery, which lasts 120 kilometers. Charging takes 50 minutes.

For the convenience of boarding and disembarking, sliding doors open on both sides. Seats are located on both sides of the vehicle: there are six in total. In the cabin you can see small plasma screens on which they will demonstrate the route, and display other useful information. Passengers themselves can control the vehicle by choosing the necessary stops. You can call the shuttle using a special application.

It is important to say that the project does not stand still, but somehow develops. As of November of this year, KamAZ has built four prototypes with the firm intention to launch development in a series. According to plans, an unmanned passenger bus will begin to roll off the assembly line in 2022 or somewhat later. He has successful tests behind him: in the summer, the SHATL on a special highway in Kazan overcame a track 650 meters long at a speed of 10 km / h. It is reported that the bus has already been taught to monitor the lane, analyze traffic signs, brake in front of obstacles and much more. 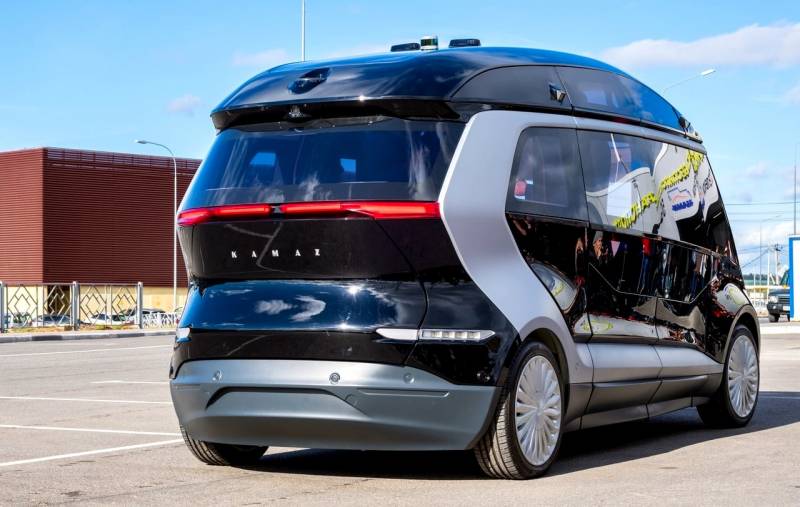 Not one of KamAZ’s projects, however, was skipped by skeptics. To begin with, the fact that Western competitors have moved much further in creating unmanned trucks (about the first commercial flight of Uber’s creation is described above). The project of an unmanned bus is also devoid of practical meaning if there is no demand for it.


Earlier, experts calculated that for the profitability of the shuttle, an order of about 50-100 cars a year is needed with a total fleet of 400-500 units in the country. However, the voiced figures look somehow too modest. The analogy may not be entirely correct, but here we can recall the long-suffering Tesla. In the third quarter of 2018, 53 thousand (!) Tesla Model 3 cars were produced. And only then the company gradually began to make a profit. Therefore, it is worth recalling once again: regardless of the class of vehicles, it is very, very difficult to make their production profitable in our time. And even revolutionary solutions do not always find a response among buyers.
Ctrl Enter
Noticed oshЫbku Highlight text and press. Ctrl + Enter
We are
German Audi introduced the "air taxi"
KamAZ is ready to launch unmanned buses on the streets
Reporterin Yandex News
Read Reporterin Google News
Ad
The publication is looking for authors in the news and analytical departments. Requirements for applicants: literacy, responsibility, efficiency, inexhaustible creative energy, experience in copywriting or journalism, the ability to quickly analyze text and check facts, write concisely and interestingly on political and economic topics. The work is paid. Contact: [email protected]
2 comments
Information
Dear reader, to leave comments on the publication, you must to register.
I have an account? Sign in