An-178: the last hope of the Ukrainian aircraft industry

December 8 2018
6
Ukraine is actively trying to promote the latest short-haul transport aircraft An-178 in the world. It turns out no better than with previous models. 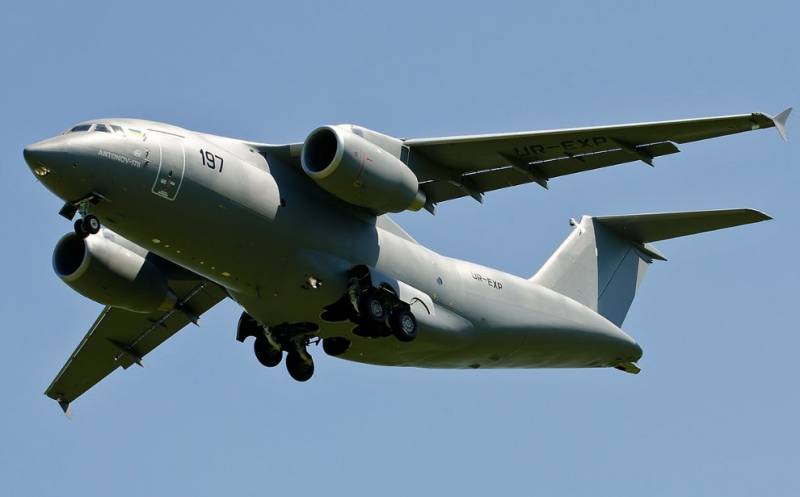 After the collapse of the USSR, independent Ukraine received a fairly powerful aircraft manufacturing complex, which is now known as the “Antonov State Enterprise”. Founded in 1946, the organization has experienced many changes in names, leaders, and eras. However, the difficulties of modern Ukraine can be finished off completely.

Strictly speaking, Antonov did not experience any ups and downs either in the 90s or in the 2000s. Rather, this entire period can be called the time of prolonged stagnation. In the 1990s, the media wrote about the An-70 military transport aircraft, which had no analogues, which customers from all over the Earth were supposedly ready to tear off. The first flight was made back in 1994, but over the past years only 2 (two) prototypes were able to build Ukraine. Of course, for the successful implementation of the project, the active participation of Russia and orders on its part were of great importance. The gradual rupture of the Russian and Ukrainian aircraft industry seems to have put an end to the project. However, the An-70 (or rather, its projected four-engine turbojet version of the An-70T-400 / An-77), was transformed into a very ambitious project of a large four-engine military transport aircraft An-188 with a maximum take-off weight of 140 tons. Such is industrial escapism.
Large family

The fate of the new Ukrainian short-haul narrow-body passenger aircraft An-148, which first took off in 2004, could have been much better. The initial plan was, in principle, clear. A fairly wide market for this class of machines could provide a wide range of orders from different countries of the so-called third world, which could be of interest to a relatively small price. But as the example of the Russian Sukhoi Superjet 100 showed, plans are one thing, and reality is another. Actually, Antonov was unable to get even close to Sukhoi. They built a plane in Ukraine and Russia. And in total, 46 units were produced until the assembly lines were mothballed. Moreover, only a few serial copies were built directly in Ukraine. In fact, the project failed completely.

There were reasons for this or not, but Antonov decided that the aircraft base itself was potentially successful. So there was his elongated version in the person of An-158, who received the VIP-salon An-168, and, finally, our hero in the person of An-178. He will be discussed further.

The first flight of the new short-haul transport aircraft An-178 was successfully carried out in 2015. The car took off from the aerodrome in Gostomel, which is located near Kiev. It should carry up to 18 tons of cargo and operate at the same airfields as the Soviet An-12, not excluding unpaved runways. The speed of the An-178 reaches 825 km / h, and the practical range is 5500 km.

During the first flight, the An-178 was in the sky for about an hour. For Ukraine, which at that time was in the most difficult conditions, this, of course, was an important event, to which the attention of many media was riveted. Such popularity gave rise to even one unusual episode. In 2015, Antonov organized a vote on the name of the new car. Among the options were Cyborg, Hope, Conan, Chumak, Sapsan, Maidan, Phoenix and others. And the Bandera variant was the leader by a wide margin. However, the ambiguous glory of the Ukrainian nationalist prompted Antonov to leave the old name. They did not come back to this question.

Representatives of the company announced "great commercial potential." It is worth saying here that Ukrainian aviation experts rated the An-178 sales market at 800 aircraft for about ten years. But this is most likely a very optimistic assessment. For example, in August 2016, the total portfolio of firm orders for the An-178 amounted to eleven vehicles. Currently, only two aircraft have been built, of which one is designed for static testing.

In general, there is no reason to believe in the success of the project. Now it is impossible to call absolutely a single factor that could testify in favor of the An-178. With all desire, Ukraine will not be able to order a lot of cars. “Cramming” into the global market for transport aircraft does not work due to: a) competition with Europeans, Americans and Brazilians, b) limited demand for such aircraft. If you look more broadly, the An-178 faced the same difficulties that Russian aircraft manufacturers had previously encountered. With the widespread use of imported components, making a new aircraft “cheap” is, in principle, difficult. Now the cost of the An-178 is estimated at $ 40 million (but this is very approximate). With a high degree of probability, the price of the car will only increase.


Another problem (this time, clean technical) became the notorious dependence on Russian components. Earlier it became known that about a third of the An-178 components were made in the Russian Federation, including landing gear, auxiliary power unit, part of avionics, hydraulics, control and much more.

In July 2018, this story received a new turn. “An-178 transport turbojet aircraft - development of Antonov engineers. And, most importantly, 78 percent of the components for the aircraft are manufactured in Ukraine, and the Russian Federation is excluded from the list of countries producing the remaining parts for our An-178, Petro Poroshenko said on his Facebook page. An alternative, according to Antonov, was Boeing. But this can hardly be called an unambiguous victory for the project. However, with a high degree of probability it can be said that the market price of the aircraft from such metamorphoses has grown even stronger.
Ctrl Enter
Noticed oshЫbku Highlight text and press. Ctrl + Enter
We are
Will Russia's new project be able to challenge Boeing and Airbus
An-77: victory of the Ukrainian aviation industry?
Reporterin Yandex News
Read Reporterin Google News
6 comments
Information
Dear reader, to leave comments on the publication, you must sign in.