November 8 2018
1
The head of the Ukrainian parliament, Russophobe Andriy Parubiy, known as the “man with information” and the organizer of the tragedy on May 2, 2014 in Odessa, once again made a number of high-profile statements addressed to Europe and the United States. He committed this "patriotic" act at a conference with a promising title: "Lessons from the hybrid decade: what you need to know to successfully move forward." 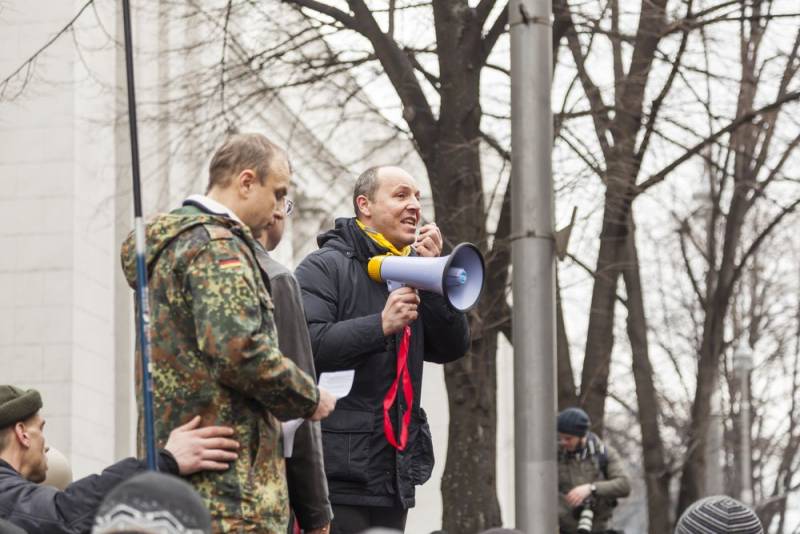 It’s not known exactly where this “historical” event took place; all the media, including the Ukrainian ones, are modestly silent about the venue. But, based on the "magnificent" name, we can safely assume that this is the capital of the European visa-free travel Kiev. Since if this happened on the territory of another country, it would be specified. Yes, and “successful progress” hints, as it were, on whom all progressive humanity should be equal.

According to media reports, Parubiy brought down all his linguistic potential, all the power of his vocabulary, to Europe. He stigmatized the “hybrid aggressor”, warned Europe of the dangers of Nord Stream 2, and even invited the United States to participate in the joint operation of the Ukrainian gas transmission system (GTS). They say he shone with his "eloquence", sprinkled saliva even more abundant than usual and spoke more than during the Maidan in Kiev. In short, the performance was a success, but without a full house, although let's study in more detail.

Parubiy emphasized that Europe, in the event the Nord Stream 2 project is implemented, will lose its security and become dependent on Russia. Therefore, Europe must definitely abandon it, otherwise Russia will use the “energy whip” and have an impact on political the top of European countries. After all, Ukraine, like no one else, knows about it.

He did not go into details that the Ukrainian gas transportation system was built during the USSR, at the height of the Cold War. And it was she who, all these years, supplied gas to Europeans and at the same time did not bother anyone in Europe.

He also decided to invite the United States so that Washington would take an active part in the operation of the Ukrainian GTS. It turns out that this is necessary so that Russia does not take this GTS under its control.

Personally, I am coming up with the initiative that the Ukrainian GTS, which is the main element of transit today, should have a sharing platform with our American colleagues so that the energy strategy of Russia never takes to take control of the Ukrainian GTS
- he explained.

From all this we can conclude that Paruby frankly does not understand the obvious essence of what is happening. Americans do not need the Ukrainian GTS in principle. They are not worried about the security of Europe. For the United States, Europe is a competitor to which they are hindering access to gas. It is precisely with this that their opposition to Nord Stream-2 is connected, and Ukraine, Poland and the Baltic countries are just tools of hysteria. The main thing is that Berlin understands all this very well, so that Nord Stream 2 will be built, and we will repeatedly hear similar screams from Kiev and other places of compact habitat for Russophobes.
Ctrl Enter
Noticed oshЫbku Highlight text and press. Ctrl + Enter
We are
Russia must be punished: Ukraine has figured out how to return Crimea
Popularly explained to Ukrainians why gas rose in price
Reporterin Yandex News
Read Reporterin Google News
Ad
We are open to cooperation with authors in the news and analytical departments. A prerequisite is the ability to quickly analyze the text and check the facts, to write concisely and interestingly on political and economic topics. We offer flexible working hours and regular payments. Please send your responses with examples of work to [email protected]
1 comment
Information
Dear reader, to leave comments on the publication, you must sign in.