November 2 2018
28
Due to the increase in global average temperature, the polar ice began to melt, but the Arctic is freed from its cover faster than the Antarctic. The reason for this is the peculiarities of the Arctic Ocean, which is a semi-enclosed body of water, where the land surrounding it does not give full power to the cosmic cold. In addition to the many troubles that warming will bring, the melting of the Arctic ice will create new opportunities for the polar countries. 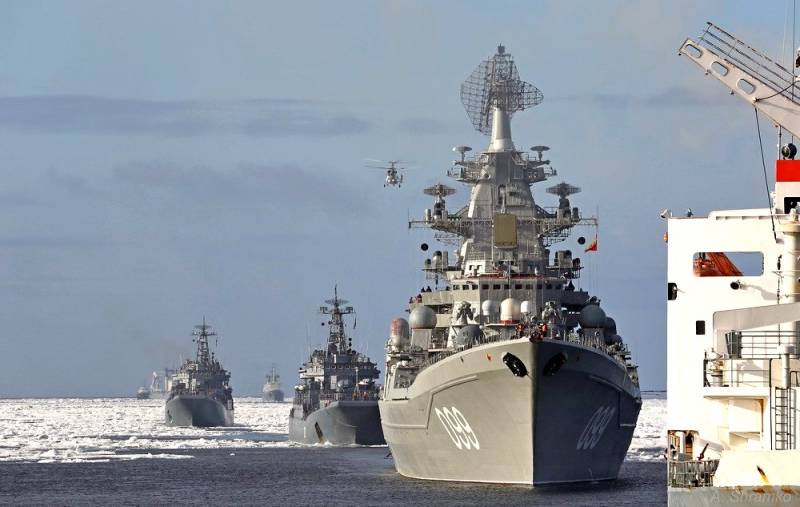 It is about the possibility of developing colossal hydrocarbon reserves stored on the continental shelf of the Arctic, as well as the transformation of the Northern Sea Route into a real alternative to the Suez Canal. So, from Asia to Europe by sea, cargo can be delivered in Suez in 35 days, and by NSR - in 19. As they say, feel the difference.

Who has the right to bite off his piece of this cold cake?

Arctic countries, except Russia, include Canada, the USA, Denmark, Sweden, Norway, Iceland and Finland. But of all of them, only our country has the longest coastline in the Arctic and the largest icebreaking fleet in the world, which has 40 ships. Also in Russia, a program for the construction of new ultramodern icebreakers has been adopted. So, have we already won the race for the Arctic?

Yes and no. The legal status of this unique region is determined by the UN Convention on the Law of the Sea. According to her, Russia owns an underwater Lomonosov ridge with an area of ​​1800 square kilometers. The scientific fact that this territory belongs to our country is confirmed by the Arctic 2007 expedition. But what are some “Conventions” for the United States when it comes to hydrocarbons? Washington would gladly take the Arctic to itself by force, which is not shy about speaking directly. The Trident Juncture 2018 exercise in Norway recently took place. The video of this preparatory action was titled: "The US Marines will take on the battle with Russia in the Arctic." As they say, comments are superfluous.

But the Americans are not so smooth. Their colossal war machine rests on the climatic features of the Arctic. Unlike Russia with its 40, the United States has only 2 icebreakers, which are able to navigate the Navy among the ice. According to preliminary estimates, the States will need 10 years each to build new icebreakers, and each such ship will cost at least a billion dollars. It turns out that our country has some head start, while Washington is not able to take and hold by force what it wants.

But the USA does not lose time in vain. While they are gaining strength to conquer the North, everything is being done to stall Russia's capabilities to develop its territories. To this end, the Americans set on our country their vassals from Canada and Europe. Thus, the European Council on Foreign Relations complains:

Russia simply can begin to exploit the Lomonosov Ridge, creating a fait accompli, which only other major military powers can protest.

Denmark is trying to prove that the Lomonosov Ridge is a continuation of its Greenland. And Canada generally said that it was ready for a war with Russia if it encroached on the “Canadian” part of the Arctic. Serious in Moscow political pressure. She will either give in, giving what she wants to the West, or push back, but then after some time the guns will start shooting in the North.
Ctrl Enter
Noticed oshЫbku Highlight text and press. Ctrl + Enter
We are
Ten "defeats" of Putin
Not good: the USA declared its rights to the Northern Sea Route
Reporterin Yandex News
Read Reporterin Google News
Ad
We are open to cooperation with authors in the news and analytical departments. A prerequisite is the ability to quickly analyze the text and check the facts, to write concisely and interestingly on political and economic topics. We offer flexible working hours and regular payments. Please send your responses with examples of work to [email protected]
28 comments
Information
Dear reader, to leave comments on the publication, you must sign in.