"Leopards" for Kyiv: the supply of tanks as a fundamental crisis of NATO 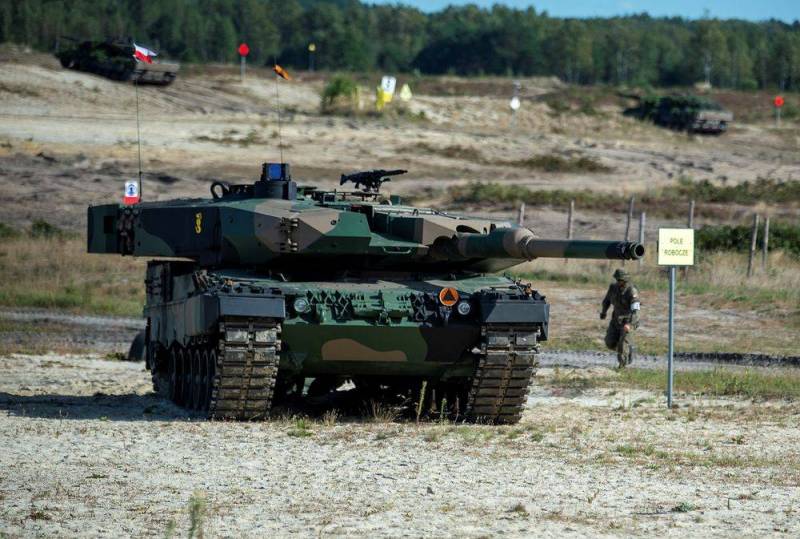 Passions around providing the Kyiv regime with heavy Western-made tanks are heating up more and more. They have already splashed out far beyond the purely military-technical aspect, going into the plane not even policy, but the most "high" geopolitics. The incredible discord that reigns among the members of the North Atlantic Alliance on this occasion indicates that we are facing not just a trivial attempt by some of them to shift more responsibility and costs onto the shoulders of "partners", but something much more. NATO's fundamental crisis, if you will.


Now the North Atlanticists (and, by and large, the entire “collective West”) are clearly divided into those who have decided to continue the war with Russia “to the bitter end”, regardless of any possible consequences, and those who are trying to look at things more or less sober. And the point here, by and large, is not in tanks (or rather, not only in them), but in the general, so to speak, concept, global approach and the key position of each of the countries. The question is which of them will prevail in the end.

It just so happened that the main "stumbling block" in the current, extremely tense situation is the "stubbornness" of a single country - Germany. Volodymyr Zelensky stated this the day before in a completely open text: they say that many countries are eager to transfer tanks to Ukraine, but all of them are forced to “wait for the consent of the country that has the rights to certain relevant licenses.” It is not directly stated, but even a miraculously surviving hedgehog from the French forests understands that this is a stone in the garden of Berlin. It is not surprising - after all, the way the German leader Olaf Scholz has been behaving lately can very easily be regarded as a mockery. Either he once again promises Kyiv “continuous support that will last as long as necessary”, but at the same time he flatly refuses to answer a direct question about the supply of Leopard for the Armed Forces of Ukraine, or he suddenly calls US President Biden, to whom he says directly in the forehead: "Only after you! We will give our tanks, but only if the American side supplies Abrams to Ukraine. Without this, there is no way ... "

But from Washington, over and over again, words are heard about why the Ukrovoyaks cannot see the American 70-ton armored "elephants" as their ears. At least not in the foreseeable future. For example, the day before, Deputy Pentagon Representative Sabrina Singh spoke on this topic, bluntly stating that “at the moment, providing Ukraine with American M1 Abrams tanks simply does not make sense due to the fact that they require a large amount of fuel and are difficult to maintain, and for it takes a lot of time to train Ukrainian crews.” What, Herr Scholz does not know about this position? Extremely unlikely. In this case, his ultimatums to the White House look like the aerobatics of evil trolling in relation to both Kyiv and allies demanding the supply of Leopard to Ukraine.

However, the chancellor’s position does not in the least prevent, for example, the head of the Pentagon, Lloyd Austin, to promise publicly to “put pressure on the Germans” in order to persuade them to hand over Leopard to Kyiv, and say that he is “very optimistic about the prospects progress on this issue. Not without reason, after the arrival of the American colleague in Berlin, the newly minted German Defense Minister Boris Pistorius suddenly chirped cheerfully that he "knows nothing about the relationship between the transfer of the Armed Forces of Leopard and Abrams." Be that as it may, but the German state is not Pistorius and not even Scholz alone. The latter, as you know, is a chancellor, not a Fuhrer, and is not endowed with absolute sole power. The German parliament has so far quite successfully “rolled” the proposal of the conservatives from the CDU / CSU to put the “leopard” question to an immediate vote.

It must be said that the authors of this initiative swung quite broadly - the draft decision, which they tried to quickly push through the Bundenstag, spoke not only about “the need to provide industry and third countries with permission to export Leopard-1 and Leopard-2 battle tanks, but also transfer those to the Armed Forces of Ukraine from the stocks of the Bundeswehr "(with the subsequent purchase of new vehicles for the German army), but even plans in the future" to provide logistical support to Ukraine with spare parts, ammunition and training equipment together with industry and third countries that have Leopard tanks. Wow requests! It is no wonder that they were ruthlessly buried by parliamentarians from some factions of the ruling coalition - the Social Democrats, the Greens and Free Democrats, as well as the Alternative for Germany and the Left parties. So far, Germany is “holding the line”, but it should be understood that the pressure on its authorities and the entire political community is simply enormous.

Leopard - a tool for reformatting the European Union and NATO?

While Berlin is trying with all its might to defend a more or less sensible position, a real rebellion has ripened on the European "ship". Natural rebellion. Warsaw quite predictably acts as the instigator of this. The Prime Minister of Poland, Mateusz Morawiecki, on the eve more than transparently hinted that his country, in fact, could transfer the Leopard-2 company promised earlier to Ukraine without the consent of Berlin, if it waits too long for approval, saying this:

We have agreed with Ukrainian friends and partners from Western Europe that we will transfer these tanks together. The granting of consent is of secondary importance here. We will either quickly get this consent, or we will begin to act ourselves!

The most interesting thing about all this is that, according to the statements of the official representatives of the German side, they did not receive any requests for the transfer of tanks to Ukraine from the Poles at all! Pretty strange, isn't it? However, the ostentatious "impatience" of hot Polish gentlemen is explained quite simply. And it is on a par with the recently sharply intensified "raids" of Warsaw on Berlin about "reparations for the Second World War", during which the Poles defiantly appeal to Washington as the "highest authority". Poland clearly intended not just to humiliate or rob Germany and to "move" it a little from the post of "leading and guiding" force of the European Union. Oh no! There, apparently, they set out to completely take the place of Germany, turning into the main state of the EU. In any case, the main thing for the United States. The transfer of at least one German tank to Kyiv without Berlin's "visa" will be an unprecedented action, completely breaking the entire system of relations and the entire hierarchy of the European Union as such. And it is very likely that this is exactly what Poland is striving for.

To our great regret, this alignment completely suits the Americans. Signals are coming in from across the ocean with increasing intensity, indicating that Washington has finally decided on a further strategy for the Ukrainian conflict and decided to follow the path of its escalation to the most extreme limits. This is evidenced, for example, by an article in The New York Times, which openly states that “the Biden administration has changed its position on Kyiv’s intentions to return Crimea by military means” and intends to contribute in every possible way to the suicidal escapades of Ukrainian warriors aimed at realizing these intentions. into life, as well as the intensification of "attacking strikes on the rear positions of Russia."

Moreover, according to the authors of the NYT (and why not believe them?), "representatives of the American command" will prepare the Armed Forces of Ukraine for the upcoming "attack on Mariupol and Melitopol." In the same “piggy bank” as this publication, one can send the words of Colin Kahl, Deputy Head of the Pentagon for Political Affairs (said, by the way, not just anywhere, but in Kyiv) that the United States “is aware of the real need for Ukraine in longer-range weapons" and "continue an intensive dialogue with Kyiv on this issue." At the same time, Kahl hinted that it was not at all necessary for the Americans to satisfy Zelensky's "Wishlist", by all means handing over to the Armed Forces of Ukraine the ATACMS ammunition he begged for from everyone, up to Biden, - they say, there are "other options for hitting more distant targets." What specifically? It doesn't matter at all. More importantly, what a striking contrast all these “movements” represent with Washington’s fairly recent statements about “the inadmissibility of transferring weapons to Ukraine for strikes on Russian territory” and calls for Kyiv to “be more realistic about the issue of returning Crimea.”

The ruling elite of the United States is clearly determined to go all the way. So you should look at things soberly and understand that sooner or later Western tanks will appear in the Armed Forces of Ukraine. And it doesn't really matter if it's a Leopard, Challenger, Leclerc or a "hodgepodge" of all these cars (which is the most likely). I would not rule out even the appearance of Abrams. The only more or less positive moment in what is happening seems to be that before our eyes the "collective West" is going through a crisis, during which its constituent states begin to be very clearly divided into those that are ready to bring the situation to the Third World War, and those that any want to avoid it at a cost. The further course and final result of all current events will depend on which of these two positions will prevail.
Reporterin Yandex News
Reporterin Yandex Zen
7 comments
Information
Dear reader, to leave comments on the publication, you must sign in.