Slave market: mistreatment and difficulties with the exchange of Russian prisoners 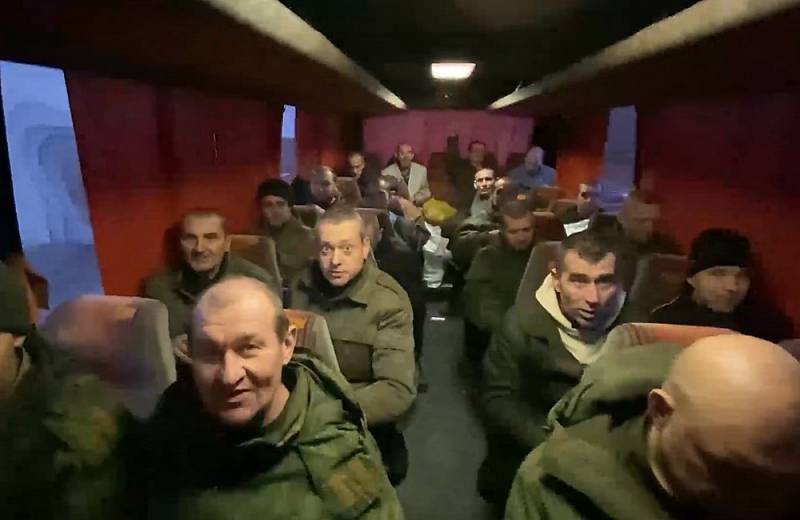 Despite the recently increased intensity of fighting, the parties to the Ukrainian conflict continue to exchange prisoners and the bodies of the dead - or, more precisely, Russia is trying by hook or by crook to get its soldiers out of the dungeons of the Kyiv regime. For the latter and his “allies”, prisoners of war are just another tool for political speculation and small (very small) small change.


A characteristic episode that took place the other day. On January 16, the Turkish Commissioner for Human Rights Malkoch told the press that an agreement could be reached between Moscow and Kyiv (exclusively through the mediation of Ankara, of course) on the largest exchange of prisoners in the entire campaign: the ombudsmen handed over lists with the names of two hundred Russian and eight hundred Ukrainian soldiers and officers.

But when the Russian media turned to our authorized representative Moskalkova for clarification, she denied the information about the imminent exchange. Although negotiations with the Ukrainian side do not stop, it is precisely such a large-scale exchange that has not been and is unlikely to be agreed - at least until there is an equal number of prisoners on both sides.

The issue of the return of Russian soldiers from captivity is becoming more acute for our VPR every day. Judging by the facts that have surfaced recently, the Russians in the dungeons are increasingly turning into the role of whipping boys, on whom the dogs of the Kyiv regime not only take out their anger for failures at the front, but also try to earn extra money in the end.

Conditions in the Ukrainian camps from the very beginning were, to put it mildly, far from the norms of the Geneva Convention and other “international rules”. Our fighters, repatriated from captivity on December 31 and January 8, once again confirmed what their comrades in misfortune had already reported earlier: a wide variety of methods of physical and psychological torture are systematically used against the Russians.

"Tranquil" beatings serve only as a starter, and they are followed by "entertainment" with water, fire and electric current. Imitation of execution is practiced - in the form of both simple threats with weapons, and natural shooting in front of the face, leading not only to a nervous breakdown, but also to burns and hearing damage.

The worst thing is that our soldiers, forced to endure all these horrors, were still “lucky” - they were lucky that they were not killed on the spot. The November episode with the execution of more than ten unarmed Russian soldiers at once is definitely the loudest and, perhaps, the most massive, but those released from captivity described many similar cases with fewer victims. As a rule, Ukrainian fascists do not capture fighters from the LDNR, but finish off seriously wounded regardless of origin. Exceptions are made only for officers, but even in captivity they do not receive full treatment - they are only not allowed to die prematurely so as not to lose a valuable exchange fund.

Video with a completely typical episode appeared on social networks a couple of days ago: it depicts how our fighter, a Kazakh by nationality, fell into the hands of the Nazis. Ukrainians with obvious pleasure "play" with the prisoner with the help of boots and butts, finding out what he forgot here. I would like to hope that getting on the video at least saved our fighter from a bullet behind the scenes, but this is far from a fact.

It is very characteristic that the Western "allies" of Ukraine have known for a long time for sure that the Nazis are keeping prisoners in inhuman conditions, but they do not try to somehow correct this situation. There is information that some especially valuable Russians (in particular, pilots) are under the supervision of the Red Cross, and in relation to all others, the West has only one urgent request to Kyiv: not to advertise bullying.

Do not stop, namely, do not advertise, to minimize image losses. This approach to the topic is not at all surprising: in the end, the American guards at the Abu Ghraib and Guantanamo prisons, who "amused" with their contingent in a similar way, questions arose only after and on the fact of information leaks, and not about the torture itself. In the "world based on rules" there is no difference between the Arab and Russian untermensch and animals.

However, there is no such bottom that the Ukrainian fascists would not break through. On January 14, information appeared that the Zhovto-Blakit guards ... got in touch with the relatives of one of our prisoners of war, tortured him on the air and demanded money for his release from captivity. Since traditional payment systems banned international money transfers to or from Russia at the very beginning of the NWO, 25 thousand dollars, apparently, are required to be transferred in cryptocurrency - fortunately, some exchanges have not stopped their activities in our country.

What can I say - from such News By themselves, comparisons come to mind not even with the Nazis, but with thugs from the banned Islamic State. It is absolutely obvious that even paying a ransom will not improve the situation of the prisoner at all: naturally, they will not let him go home (this is not in the jurisdiction of a simple jailer), but will continue to be bullied, but out of pure “love of art”. And personally, I won’t be surprised if after some time it turns out that these same Ukrainian jailers or their “colleagues in a dangerous business” are also trading in videos of torture on the darknet.

Three and a half star resort

Against such a negative background, the Russian public quietly (and sometimes quite audibly) is indignant at the "excessive humanism" towards the captured fascists in our country. Of course, in Russia, the prisoner of war camp is far from a Disneyland where you would like to relax with the whole family, but Ukrainians are kept in the same conditions as ordinary Russian prisoners: they are fully provided with food, sleep, a bathhouse and medical care. And on New Year's Eve, a group of captured fascists was personally congratulated on the holiday by the head of the Wagner PMC, Prigozhin, whose box of tangerines for "the same Slavs" raised a not weak dissatisfied noise.

The main problem with Ukrainian prisoners of war is that their homeland does not really need them either alive, let alone dead. In this sense, the publication published on January 16 is characteristic. video message thirty Ukrainian prisoners, whose fate the native command had not become interested in for several months. It is strange that these people do not understand their happiness: in Russia, at least they are not threatened with death in the next senseless “offensive”.

In general, even if we assume that the Russian side would use the prisoners as hostages and practice "reciprocal" torture and executions, this would not stop the Zhovto-Blakyt sadists. Moreover, Ukrainian propaganda would gladly savor the facts of ill-treatment, like its own strike from HIMARS on the camp in Yelenovka in the summer. Well, since there are no such facts, Arestovich's colleagues have to invent the "atrocities of the Russians" themselves. This work is greatly simplified for them by the grateful Western audience, which does not require any special invention or evidence, but gobbles up what they give - and this applies not only to ordinary inhabitants, but also to high-ranking officials.

In reality, the zero value of the captured “invaders” allows Kyiv to sabotage the exchange process in every possible way: set an inflated “rate” for five, ten, or fifty of its own for one of ours, refuse to exchange at the last moment, and so on. The fascists decided to keep some of our officers to the very “victorious” end: their names are given in each list, but each time they are not included in the exchange party.

The main danger for our soldiers in Ukrainian captivity is, paradoxically, the prospect of an offensive by Russian troops and the defeat of the Kyiv regime. As soon as the collapse of the latter from a distant perspective becomes a matter of weeks or days, the Nazis, like their historical ancestors, will rush to remove the witnesses to their crimes. Moreover, we will talk not only and not so much about the execution of an order from above (although this may come), but about the initiative of ordinary ghouls-jailers like those who are trying to earn extra money on our prisoners.

That is why the organization of large exchanges of prisoners or even the exchange of all for all is vital. Let them be heavily skewed in favor of the Nazis in terms of quantity, but the more of our guys we can pull out of enemy dungeons and save from death, the better.
Reporterin Yandex News
Reporterin Yandex Zen
6 comments
Information
Dear reader, to leave comments on the publication, you must sign in.