Tons of gold will not save Russia

February 28 2018
4
The gold reserve is one of the pillars of national wealth. It is no coincidence that the most developed countries of the world compete among themselves in the amount of gold reserves. In 2018, Russia entered the Top 5 holders of gold reserves, leaving China behind. Despite the fact that Beijing has always paid great attention to the formation of its gold reserve, Moscow managed to overtake the PRC and take fourth place in the world in reserves of the most precious metal. 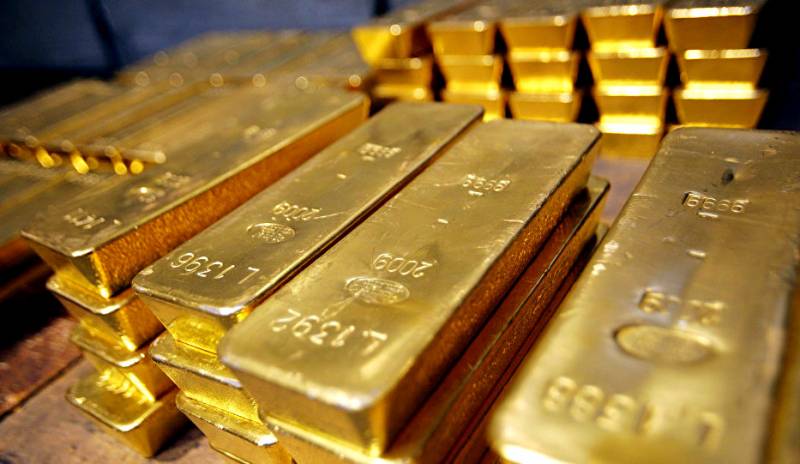 Currently, Russia is second only to three holders of gold. The world's largest gold reserve of 8134 tons is controlled by the United States of America. Germany has the second gold reserve - 3374 tons of gold. In third place is the International Monetary Fund with 2814 tons of gold. Fourth place is now taken by Russia. The Bank of Russia has published information about the country's gold reserves - it is 1856,88 tons of gold, which is estimated at $ 80 billion. Not only China, but also such serious players as France and Italy have remained behind Russia.

Interestingly, in recent years, the pace of building up gold reserves in Russia is the most rapid. Turkey, Kazakhstan, and Qatar also show trends in increasing their gold reserves, however, the amount of gold available to these countries is incomparable with the Russian gold reserve.

Why does a country need gold?

At firstSignificant gold reserves make it possible to achieve substantial independence from the financial systems of the United States and the European Union. It is for this purpose that China is building up its golden potential, which has long been trying to create an alternative settlement system and provide reliable protection against possible unfriendly actions by the United States.

Secondlyof no less importance is the gold reserve as a kind of insurance against the numerous risks that accompany changes in the world economic и political situation.

What do we currently see in the world? Tensions are growing in the political relations between Russia and the United States, economic sanctions imposed against our country remain, bloody armed conflicts in the Middle East and North Africa last for years. Under these conditions, gold is becoming one of the most reliable economic reserves of the country.

However, the possession of a serious gold reserve does not make the country as protected from possible threats as possible. Thus, gold prices, although not as dynamic as oil prices, are also subject to fluctuations. Determines the world gold prices of the London Stock Exchange. If Russia becomes the owner of a huge gold reserve, the West will still get the opportunity to influence the economic situation by lowering the price of gold on the London Stock Exchange.

Therefore, the possession of a powerful gold reserve is good subject to the availability of other assets and instruments. This can be compared with human assets - it is best to have real estate, a deposit in a bank, and an insurance deposit. So at the macro level - the state increases its economic security when the gold reserve is far from the only reserve asset. Although, of course, in critical situations, gold can really save the situation.