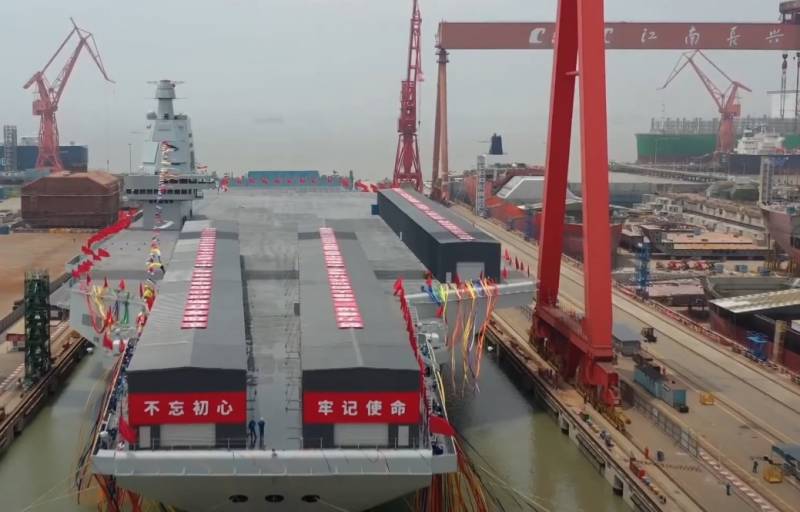 The Celestial Fleet is preparing the largest warship in its history for sea trials. This aircraft carrier of project 003 "Fujian", which is a direct competitor to the latest American aircraft carrier Gerald R. Ford, is designed to become a worthy counterweight to the United States in the Asia-Pacific region.


Details about the Chinese aircraft carrier are reported by the Hong Kong edition of SCMP. As reported in the publication, "Fujian" marks an important milestone in the program to modernize the armed forces and bridge the technological gap with the United States.

The country's newest aircraft carrier is one of the key points in the country's return to the forefront of world powers on the 100th anniversary of the People's Republic of China, which will be celebrated in 2049
says the SCMP publication.

According to Western analysts, the ship project 003 is largely based on Soviet developments of the unfinished aircraft carrier Ulyanovsk. But Chinese engineers not only brought to life an unrealized project, but also equipped it with the most modern systems. Among the innovations of the ship is the presence of an electromagnetic catapult, similar to which is installed on the American Gerald R. Ford.

The Fujian was launched at the Shanghai Jiangnan shipyard on June 17 last year and began mooring trials in September. In the coming months, the ship will be fully refitted and will begin sea trials.
Reporterin Yandex News
Reporterin Yandex Zen
4 comments
Information
Dear reader, to leave comments on the publication, you must sign in.