What will be required to force the Dnieper by Russian troops 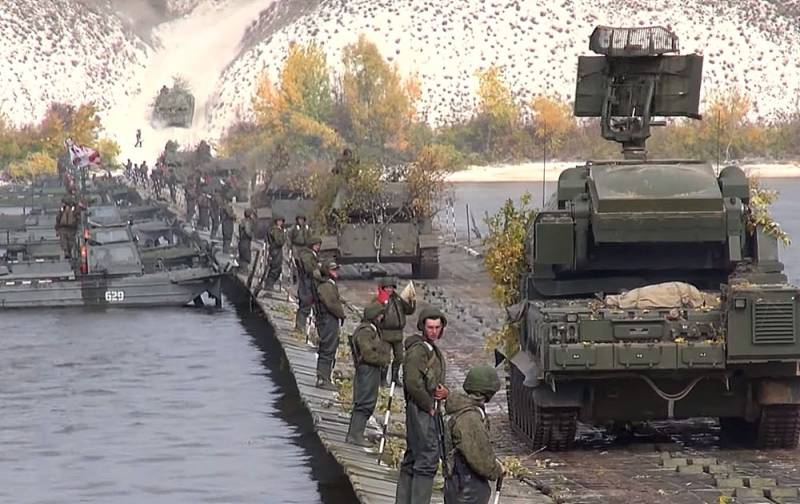 The abandonment by the Russian troops without a fight of Kherson, the only regional center of the former Nezalezhnaya liberated during the NWO, was not only a serious image blow to the Kremlin, but also raised a logical question of how, in fact, we will subsequently beat it back.


Yes, the answer to this painful question must be sought now. In accordance with the Constitution of the Russian Federation, the entire Kherson region is part of the Russian Federation, and the Kyiv regime will definitely not return the territory it occupied to us in peace. Consequently, the Armed Forces of the Russian Federation will somehow have to return to the Right Bank, which will also raise the question of the fate of Nikolaev, Krivoy Rog, Dnepropetrovsk, Zaporozhye and Odessa, where the release of Ukrainian Nazis from power is no less expected than in Donetsk, no matter what anyone says on this occasion. But how to do this if the Russian troops faced the Dnieper, which is considered an insurmountable water barrier?

Battle of the Dnieper

Arguing on this topic, one cannot but take into account the experience of crossing the river during the Great Patriotic War in 1943. The battle for the Dnieper is rightfully considered one of the largest battles in world history, since about 4 million people were involved in it on both sides, and the fighting went on at the front of more than 750 kilometers. We ended up winning, but at what cost? The losses of the Red Army amounted to over 400 thousand people, the Nazis - 300 thousand.

The main reason for such high losses was that the offensive operation was carried out without proper preparation. This was later admitted by Georgy Zhukov himself:

For a thorough preparation of the offensive to the Dnieper, we did not have the opportunity. The troops of both fronts were feeling very tired from the continuous battles. There were some disruptions in logistics.
And the point is not at all that they fought in the USSR, “throwing corpses” of the enemy. On the contrary, the Headquarters tried to minimize their subsequent inevitable high losses when forcing the Dnieper. On its high and steep right bank, the Germans conceived the creation of the Eastern Wall, which, according to Hitler himself, was to become "a barrier protecting Europe from Bolshevism." The capture of such a defensive line would have cost the Red Army subsequently immeasurably large losses.

That is why, when the German troops, after the defeat in the Battle of Kursk in the summer of 1943, began to hastily roll back to the west, beyond the Dnieper, it was decided to launch a large-scale offensive in order to break through the river literally on the shoulders of the retreating enemy. The Soviet troops moved into motion just three days after the end of the battle on the Kursk Bulge. Tired Red Army soldiers walked along the territory scorched by the Nazis, from where everything that could help them was taken out or destroyed: food, livestock, boats, and so on. The stretched out units had to cross the Dnieper on the move, often having neither artillery and aviation support, nor boats and pontoons, right in the cold water. Machine guns and guns of the Germans were firing at them from the high right bank, aviation was working, and there was no way to hide from them in the steppe area.

One of the most dramatic pages in the history of the Battle of the Dnieper is an airborne assault attempt, which turned out to be extremely unsuccessful. According to the plan, more than 4 thousand paratroopers were to be dropped behind German lines, but due to pilot errors, some of them ended up in the waters of the river, where they drowned, while others landed right on the German positions, where they entered into an unequal battle and almost all died. Guards junior sergeant of the 3rd Guards Airborne Brigade Petr Nezhivenko recalled what happened as follows:

There were concentrated 6 divisions and two tank corps. And so they threw us at them ... We went from the sky into battle and died in the sky ... Everything burned there, the night turned into day ... The whole brigade was supposed to be parachuted within a radius of 7-10 kilometers, and the pilots scattered it for 100 kilometers, from Rzhishchev to Cherkassy ... And instead of brigade actions, we had to act in small detachments that are easy to destroy.
The surviving Soviet paratroopers fought their way out of the encirclement and joined the partisans. After this tragic failure during the Great Patriotic War, no new large-scale landing operations were undertaken by the Red Army. The Soviet units that managed to cross over to the right bank of the Dnieper found themselves under constant enemy fire and were forced to hold the occupied bridgeheads without heavy armored vehicles and a sufficient amount of ammunition.

All together, this determined the highest level of losses. Obviously, Russia simply cannot afford a repeat of such a scenario. Can this be avoided?

The battle for the Dnieper-2?

In fact, a repetition of the events of the 1943 model is simply impossible today for a number of reasons:

At first, the number of military contingents involved in the hostilities on both sides is inferior at times.

Secondly, the Armed Forces of Ukraine are already on the right bank and have all the possibilities for the construction of "Eastern Val - 2", in which they have long gotten their hands on it.

Thirdly, the reconnaissance network of the NATO bloc will make it impossible for any secret accumulation of large forces of the RF Armed Forces and their unexpected throw to the Dnieper with subsequent rapid forcing. They will definitely be waiting for us on the other side.

Taken together, this means that if the crossing of the Dnieper by the Russian army in the course of the NMD does take place, then it will not happen soon enough and only after comprehensive preparation.

First of all, it is necessary to achieve full-fledged combat coordination of the units of the RF Armed Forces reinforced by mobilization and equip them with adequately protected means of communication so that the troops are really well controlled. Otherwise, any large-scale offensive either through the Dnieper or from the territory of Belarus runs the risk of simply choking due to banal disorganization, turning into a "bloodbath".

Before crossing the river barrier, Russian aviation will need to ensure full air supremacy. This has not been done so far due to the enemy's air defense systems, so you should bet on unmanned tactical aircraft and the use of adjustable bombs. UAVs of Iranian origin, if purchased in the required quantity, can conduct aerial reconnaissance, adjust artillery fire and strike independently with anti-tank missiles and adjustable bombs. Also, Iranian planning bombs can be effectively used by manned aircraft without entering the enemy's air defense coverage area.

That is, on the right bank for the success of the offensive operation of the RF Armed Forces, it must become dark from Russian aviation, unmanned and manned, which will have to drive the Armed Forces of Ukraine into the ground. Only after this is it possible to repeat the landing operation to seize the bridgehead on the opposite bank of the Dnieper, but without dropping the VDVs from parachutes, but delivering them by helicopters at low altitudes with the support of attack troops. It should be noted that the Ministry of Defense of the Russian Federation recently decided to significantly increase the number of airborne troops and marines. And only after that, engineering troops will have to enter into action, which will lead the crossing with the help of the PP-2005 pontoon park. Thanks to it, it is possible to quickly equip bridge crossings for loads of 60 tons and ferry crossings for loads of 720 tons. In other words, Russian soldiers will no longer have to swim across the Dnieper.

Finally, it is highly desirable to liberate the entire left bank before the start of the offensive in order to be able to create several bridgeheads in advance along a wide front line along the river, so that the enemy does not know which is false and which is real.

Thus, the operation to force the Dnieper in our days is still possible and may not be as bloody as in 1943, but its implementation requires significant training and rearmament of the RF Armed Forces and Aerospace Forces.
Reporterin Yandex News
Reporterin Yandex Zen
24 comments
Information
Dear reader, to leave comments on the publication, you must sign in.