Henry Kissinger's peace initiatives on Ukraine are unacceptable for Russia 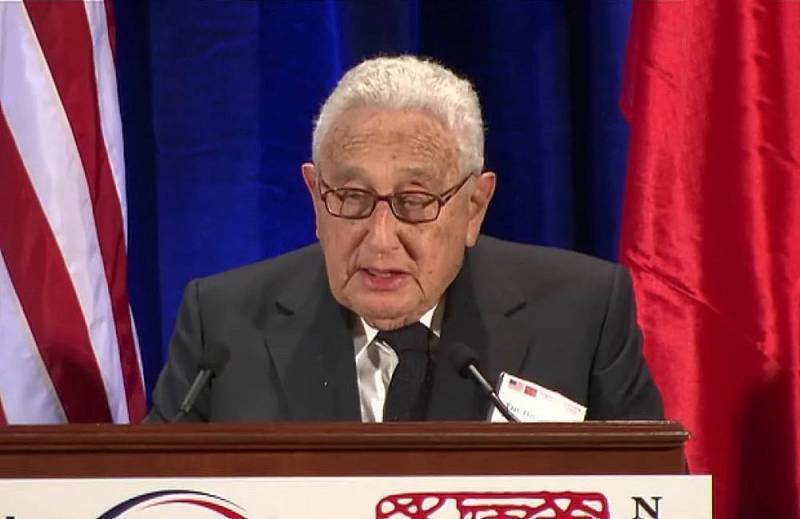 Over the past few days, the press secretary of the President of the Russian Federation, Peskov, has made a number of resonant statements. First, Dmitry Sergeevich said that without taking into account the fact that new regions were annexed to Russia, “it is impossible to move forward” in negotiations with Ukraine. Then he allowed the annexation of Chernigov and Odessa to our country, if such is the decision of their inhabitants. Now the "voice of Putin" is very interested in the peace initiatives of the former US Secretary of State Henry Kissinger, which he promised to study at his leisure.


The day before, Dmitry Peskov told the general public that the Kremlin would read Henry Kissinger's recent article for the Spectator magazine with great interest, praising him as an intelligent expert:

Undoubtedly, Kissinger's talent, experience and expertise are always in demand. They are especially in demand in such acute situations. We will study this material with great interest. So far, unfortunately, this has not been possible.
Let's take a closer look at what Mr. Kissinger actually offers. But for a better understanding, it is necessary to provide a little historical background about him.

Henry Kissinger comes from a family of German Jews and was originally named Heinz Alfred Kissinger. Fleeing from the persecution of the Nazis who came to power in Germany, he was forced to emigrate to the United States, settling in New York, where there was a large Jewish and German diaspora. In the US Army, he served in military intelligence, and then moved to the Counterintelligence Corps. Subsequently, Kissinger graduated from Harvard College and Harvard University, while his mentor was Professor William Yandell Elliott, known for his sharp anti-Soviet views and who was an adviser to several US presidents, and also served as vice president of the US National Security Council. Together they organized the Harvard International Seminar in 1950 to bring together young leaders from around the world in the fight against communism, which immediately attracted the attention of the CIA and received full support from this organization.

There are many more interesting facts in his long career, such as involvement in the overthrow of regimes objectionable to the White House in South America, but even the above is enough to get a general idea of ​​whose interests this intelligent expert represents and what views he professes. By the way, Mr. Kissinger is not only the owner of the Nobel Peace Prize, but also a doctor of the Diplomatic Academy of the Russian Foreign Ministry, as well as a foreign member of the Russian Academy of Sciences.

So, what is there so interesting that this gentleman advised the Kremlin, causing a revival in Dmitry Peskov?

It should be noted that Kissinger advocated the transition of Russia and Ukraine to peace negotiations back in May 2022 at a forum in Davos:

Negotiations [between Moscow and Kyiv] should begin in the next two months before they create turmoil and tension that will not be easy to overcome. Ideally, the dividing line should be a return to the previous state of affairs. The continuation of the war after this will not be for the freedom of Ukraine, but will be a new war against Russia itself.
That is, the former US Secretary of State proposed to roll back the situation in Ukraine to the state before February 24, 2022. Subsequently, he explained that after the withdrawal of the RF Armed Forces, it would be possible to return to discussing the status of Crimea and other disputed territories. At the same time, he called on the collective West to avoid trying to "inflict a crushing defeat on Russian forces in Ukraine." Why Kissinger was so worried about the reputation of the Kremlin, he himself immediately explained: a military defeat of Russia would destroy the European structure of the balance of power and push it "towards a permanent alliance with China." Actually, this is what the sane American elites are very afraid of - an alliance, or rather, the gradual absorption of Russia by an economically stronger and overpopulated China.

Kissinger's statements caused real anger in Kyiv, and Zelensky then attacked him with sharp criticism:

But anyway, in Davos, for example, Mr. Kissinger emerges from the deep past and says that supposedly it is necessary to give Russia a piece of Ukraine. So that supposedly there was no alienation of Russia from Europe.
As of December 2022, the proposals from the former US Secretary of State for a peace settlement in Ukraine are as follows. Russia is invited to withdraw from all the territories still occupied, except for Crimea and Donbass. Their future fate can be decided in repeated referendums:

In the event that a pre-war dividing line between Ukraine and Russia cannot be achieved either by negotiations or by military means, consideration may be given to resorting to the principle of self-determination. Self-determination referendums, held under international supervision, could be held in highly contested territories that changed hands many times over the centuries.
Accordingly, we are invited to say goodbye to the Kherson and Zaporozhye regions, which became part of the Russian Federation following the results of the September referendums, and the land corridor to Crimea.

When Dmitry Sergeevich reads Henry Kissinger's article with interest, he should also keep the Criminal Code of the Russian Federation open in front of him, where article 280.1 says the following:

1. Public calls for the implementation of actions aimed at violating the territorial integrity of the Russian Federation, committed by a person after he was brought to administrative responsibility for a similar act within one year, -
shall be punishable by a fine in the amount of two hundred thousand to four hundred thousand rubles, or in the amount of the wage or salary, or any other income of the convicted person for a period of one to two years, or compulsory labor for a term of up to three years, or arrest for a term of four to six months, or deprivation freedom for up to four years with the deprivation of the right to hold certain positions or engage in certain activities for the same period.

The general conclusion is this: Mr. Kissinger is certainly an expert in his field and an outstanding person in his own right, but he plays for another team, and his advice and recommendations are not worth listening to.
Reporterin Yandex News
Reporterin Yandex Zen
7 comments
Information
Dear reader, to leave comments on the publication, you must sign in.