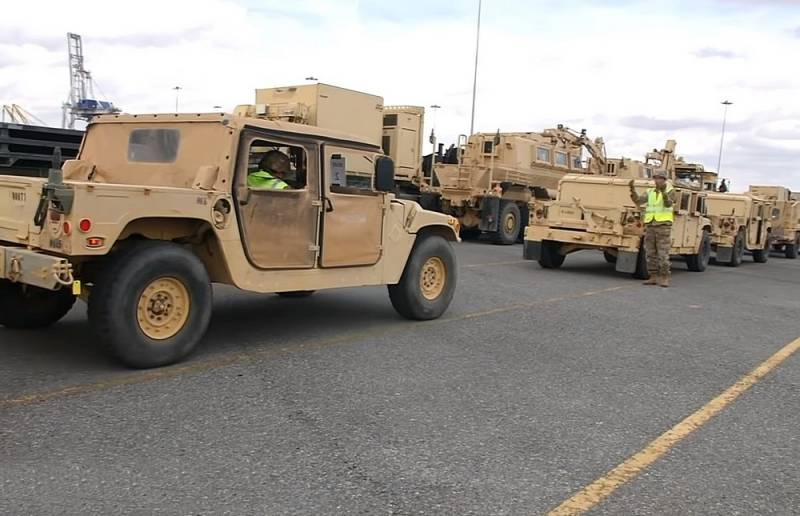 The second week of December 2022 was full of important events and political statements. The Anglo-Saxons, with the help of their wards in Kyiv, carried out several serious rear attacks on our country, thereby probing the Kremlin's reaction to the attacks of the Armed Forces of Ukraine deep into Russian territory. And since this reaction turned out to be near zero, Washington has already begun to openly declare that they will not interfere with Ukraine's attempts to develop and use long-range weapons.


Everyone is well aware that the appearance of such weapons in the Armed Forces of Ukraine can only happen at the suggestion of the United States and other NATO countries. Therefore, it is very obvious that if the strikes on Russian territory continue, the Russian Federation will be forced to react somehow. One of these reactions can be hits on the rear of the Anglo-Saxons themselves, because it is there that the "notorious decision-making places" are located. Perhaps realizing this, NATO Secretary General Jens Stoltenberg makes one of the loudest statements of recent months. During the talk show Lindmo on the Norwegian television channel NRK, he bluntly said:

I am afraid that the war in Ukraine will get out of control and develop into a big war between NATO and Russia.
True, the NATO Secretary General later added that the Alliance would try to avoid this, but no one heard these words of his. With his statement, Stoltenberg actually gave the green light to a direct confrontation between NATO and Russia, which will inevitably lead to a new global military conflict. All signs of NATO preparing for such a conflict are evident, in connection with which the whole world is now frozen in anxious expectation.

How is NATO preparing for open war with Russia?

After the Armed Forces of Ukraine struck airfields in the Ryazan and Saratov regions, everyone rightly began to ask two questions: where did Ukraine get long-range weapons and how will it use them further? And if the first one was soon more or less sorted out (according to the main version, it was a Soviet Tu-141 drone, modernized with the help of Western avionics), then the second one remained open.

At the same time, this question began to be asked everywhere, including in Washington. And at the next press conference, US Secretary of Defense Lloyd Austin actually directly admitted that such strikes were carried out at the suggestion of the Americans:

The question was whether the US is seeking to prevent Ukraine from building its own long-range strike capability. The short answer is no. We certainly don't do this.
It's funny how the Anglo-Saxons know how to "change shoes" on the fly. Throughout the year, they kept saying that they did not encourage the strikes of the Armed Forces of Ukraine on Russian territory and prevented this in every possible way. Literally a couple of days before Austin's statement, on December 5, The Wall Street Journal published information that even HIMARS installations were specially reprogrammed so that they could not hit Russian territory. But already on December 9, the British The Sunday Times published an article openly saying that from now on, the Pentagon does not interfere with Ukraine's strikes on the Russian Federation. The only thing Washington is now thinking about is the further escalation that such attacks will inevitably lead to. But due to the rather passive reaction of the Russian Defense Ministry to strikes on Russian territory, the US is now less concerned that Moscow will use tactical nuclear weapons to stop the Armed Forces of Ukraine.

So, we see that after probing the reaction of the Russian Federation to strikes deep into its territory, the Anglo-Saxons moved on to more decisive actions and provocative statements. Another American politician, ex-Pentagon employee Eric Edelman, generally stated that the United States should give Ukraine not only ATACMS (long-range missiles to HIMARS), but also supply the Armed Forces of Ukraine with main battle tanks. And as if to confirm these words, we see how Washington massively transfers hundreds of armored vehicles to Poland, including M1A2 Abrams tanks. It is planned that in early 2023 another batch with more than 2000 weapons will arrive there, which will fully equip the 1st Infantry Division of the US Armed Forces, which, apparently, is now in Poland for a long time.

In addition to pumping Ukraine with long-range weapons and building NATO capabilities in Eastern Europe, there is another troubling sign that hints at preparations for a major war. The US military budget for 2023, recently agreed in Congress, is a record $858 billion in history. This is about the same as the military budgets of China, Russia and the EU combined. Moreover, both Democrats and Republicans equally voted for an increase in the defense budget, which once again proves the existence of a consensus among the American elites regarding the war with Moscow.

What will be the reaction of Russia?

What can or should our country do in this situation? This question is most actively asked not only by ordinary citizens, but also by those in power. Our president recently said that Russia should have launched a special military operation in Ukraine earlier, thus, perhaps, results could have been achieved faster and with less bloodshed. But all this is a matter of bygone days, but today the need for a war with an embittered and heavily armed enemy is already on the agenda.

Former Defense Minister of the DPR recently appeared in Moscow Igor Gunmen to the question "What to do?" issued a very lengthy monologue, in which he actually called for the transfer of the country to a military footing. Russia, of course, surpasses Ukraine in resource and industrial potential, therefore, our country naturally faces the need to use these resources to achieve the goals of the NWO. The same applies to the human potential, which allows the Russian Federation not only to significantly increase its offensive capabilities, but also to improve the quality of the rear.

But the most important thing should happen not on the ground, but in the heads. Unfortunately, not all of us have fully realized the seriousness of what is happening now. Many still believe that the NWO is somewhere far away and does not affect their interests. According to the caustic remark of one of our commentators, people believe that “they are drinking somewhere”, while they themselves will continue to watch everything that happens from the side, “with a cup of espresso on a warm sofa”. This is true, because in most cases, illusions are destroyed only at the moment when the projectile arrives exactly at your house, killing or maiming your loved ones. This is how human psychology works. And our task is to try to rebuild it as quickly as possible, because otherwise it will not be possible to hide even beyond the Urals.
Reporterin Yandex News
Reporterin Yandex Zen
55 comments
Information
Dear reader, to leave comments on the publication, you must sign in.