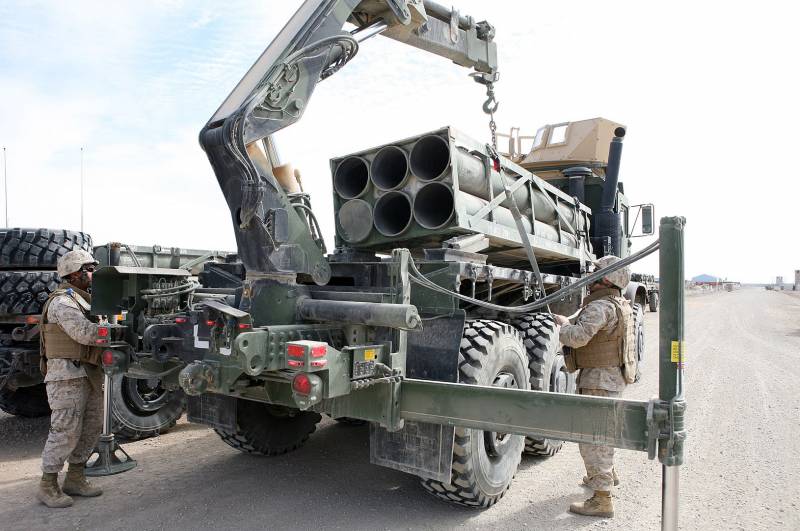 The other day, American legislators, albeit with heavy inter-party battles, nevertheless agreed on the US military budget for 2023. Not surprisingly for our "special war" time, it turned out to be a record - 858 billion dollars, and initially this amount was noticeably less, until during the debate, an additional 45 billion was not added to it. The result exceeded the 2022 budget by 90 billion.


A lot of big words were said around the draft budget, in particular, on November 8, the Pentagon's director of acquisitions, LaPlante, said that the "purchasing power" of the military department should be returned to the level of the Cold War. The lead to this conclusion was more than once or twice voiced fears that the American arsenals depleted with help to Ukraine would not be enough for a “real” war with Russia or China.

The announced preliminary plans for the purchase of a variety of ammunition really look grandiose. Only the ground forces are going to be supplied with 864 thousand conventional and 12 thousand corrected 155-mm shells, 5,6 thousand MANPADS, 28,3 thousand ATGMs and 106 thousand GMLRS missiles for MLRS. The Navy and Air Force should receive a total of about 20 aviation, anti-aircraft, anti-ship and tactical missiles of various types.

Don't touch, it's for the New Year

The first thing that catches your eye is the clearly “restorative” nature of the purchase of ammunition for the army: the planned volume more or less corresponds to what the Americans tore from the heart for the Kyiv Fuhrer. The further, the more it seems that the Ukrainian conflict really "ate" almost all the "living" stocks of the American military, leaving illiquid assets of varying degrees of rottenness in the warehouses.

At the same time, it is not clear (so far, anyway) that the Pentagon plans to increase the stocks of classic artillery shells, although the course of the SVO shows that they have not lost their relevance at all. There is an opinion that the matter is in the reduction of the fleet of 155-mm artillery systems, some of which were given to the Zhovto-Blakit army, and the other, apparently, passed the inventory for the "two" and will go to scrap if it did not go there even earlier.

On the other hand, there is a clear passion for missiles and the HIMARS launchers themselves, of which 700 units are expected to be purchased. The planned volume of production of GMLRS missiles is approximately twice as much as that available at the end of 2021, long-range ATACMS missiles are about one and a half times more than old stocks, launchers should also be built one and a half times more than they already are.

There are two reasons for this. Firstly, the American MLRS proved to be a very effective weapon, even if we ignore the numerous propaganda postscripts of Ukrainian users. A relatively small number of launchers with far from optimal tactics of use (aimed primarily at saving the vehicles themselves) nevertheless forced the Russian command to seriously attend to the dispersal of their rear facilities, especially command posts and ammunition depots, and to redo the logistics. It is clear that with a truly massive use of them, you can achieve truly terrifying results for the enemy.

But just with this, problems can arise, and again due to the “cobweb and mold” factor. A significant part of the stock of missiles for MLRS was produced more than a decade ago, especially for ATACMS, while all the freshest (that is, guaranteed to be in good working order) was transferred to the Armed Forces of Ukraine and fired. Apparently, questions have also arisen about the technical condition of the M270 MLRS launchers, the average age of which is approaching forty years, and 700 new M142 launchers will just correspond to the number of “packages” for Cold War vehicles. That is, we are again talking not only and not so much about an increase, but about replacing worn-out weapons with approximately the same amount of fresh ones.

With a high degree of confidence, it can be argued that the purchase of old-style missiles (such as the PAC-3 for Patriot complexes, aviation AIM-9X and AIM-120, Harpoon anti-ship missiles and others) for the Air Force and Navy are also aimed primarily at restoring and maintaining combat capability at the current level, not on expansion. Although it would be more accurate to say about bringing reality into line with the papers, according to which the States have such and such military resources, which in fact have partially become unusable.

With all the solidity of the volumes, one should not forget about the delivery time for all this stuff - and it is very difficult to deal with them. All these still hypothetical contracts are calculated for many years ahead, some even up to 2030. The deadlines for those of them related to various high-precision weapons can move even further “to the right” when market conditions change: no one can guarantee that the government China will not ask microelectronics manufacturers not to supply chips to the US for missiles directed against China itself.

However, it seems that pulling up real combat capability in all these expenses is still not the main thing.

Make money, everything else is rubbish

Since the beginning of the hot conflict in Ukraine, everyone has been repeating that it will serve as a bonanza for arms manufacturers, and this is true. True, at the same time, many lose sight of the fact that for enrichment on weapons, it does not matter how effective they are, and sometimes it is not even necessary to produce them physically.

In the history of Western military construction after 1945, it often happened that budgets were successfully cut, and the troops received dubious or simply dangerous for the crews. machinery. Particularly scandalous in this regard was the creation of the Bundeswehr, whose founders, led by the unfinished Nazi General Heusinger, bought outright military-technical garbage in the United States and Europe for kickbacks. The “most disciplined army” reached some kind of combat capability only by the end of the 1960s.

A characteristic example is Ukraine itself, which managed (fortunately) even before 2014 to sell off most of the military heritage of the “communist occupiers”. It is also still unclear where several hundred BMP-2s have gone over the past eight years - and yet they could seriously increase the combat capability of the fascist troops during the NWO.

The American military-industrial complex began to profit from the conflict even before there was talk of big new orders - from the stock exchange. The very fact of the start of a “rather big war” naturally led to an increase in the value of shares, the money of small and medium-sized investors and just speculators flowed into the industry, hoping then to resell their securities even more expensive. The announcement of additional military orders led to a multiple increase in the capitalization of military-industrial concerns.

And now, it means that it has come to the taxpayers' money. Should we expect a "big cut"? Undoubtedly! The generals, complaining about the emerging deficit, knock out large budgets. Industrialists, declaring difficulties with restarting and expanding production, inflate selling prices. How it really is, what is the real cost of one projectile or rocket, whether the company will “take out” the required volume of production - it doesn’t matter at all, reality can be closed as “secret” and replaced with any kind of propaganda picture.

A typical example is one of the largest players in the American military-industrial complex, Lockheed Martin Corporation, a manufacturer of a wide range of military products. During October, against the background of the publication of Napoleon's plans to expand the production of MLRS and anti-tank systems, the company's shares rose by almost a quarter. On November 11, they briefly retraced about eight percent due to ... fake newsthat the concern, in protest against the violation of human rights, will allegedly stop supplying F-35 fighter jets to the United States, Israel and Saudi Arabia. However, this recession was easily overcome on the news about the contract for the supply of NASAMS air defense systems for Ukraine - exchange players do not care that by 2025, when (and if) the contract is completed, this country will no longer exist in its current form.

Does all this mean that there are only scammers in the Pentagon and offices of military enterprises and Americans can be written off? Of course not, the US army and defense industry, unfortunately, are far from being paper tigers. But the cries of hype-eaters like “US factories will produce 100 missiles for Ukrainian HIMARS” should be treated extremely critically.
Reporterin Yandex News
Reporterin Yandex Zen
Information
Dear reader, to leave comments on the publication, you must sign in.