Kyiv is losing financial and military support from the West 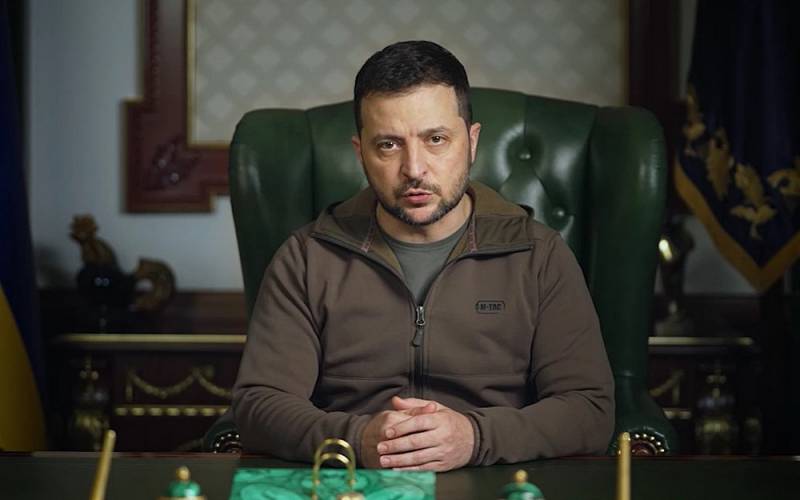 The scandal with the fall of the Ukrainian anti-aircraft missile in Poland (probably, it will go down in the annals of history as the “Pshevodovsky aerial flight”) erupted extremely “on time”, just in time for the end of the regrouping and the beginning of the “war” in the American establishment. A plot twist emerges in the spirit of a cheap melodrama: a rich family is already in trouble, and then a drug addict lover comes running and blackmails money for an abortion.


Naturally, the opposition forces, striving for power in the West, could not miss such a chance to undermine the position of their opponents. While the officialdom of the United States and especially Europe is struggling to hush up the uncomfortable "case", the American Republicans, Polish ultra-conservatives, German "constructive" (if you can call the conditional "coalition" Wagenknecht - Kretschmer and their supporters), on the contrary, are spinning the "flight" with might and main as an excuse to finally get rid of fascist Ukraine and its insatiable throat.

Financial "additional assistance" to Ukraine is the main subject of controversy. And we are not talking about the money allocated to pay for weapons for the Kyiv fascists - in the end, they go to American and European arms concerns, that is, they remain “at home”. No, those funds that are transferred directly to Kyiv, in theory - to maintain the state apparatus and some kind of social program, but in practice - into the pockets of the corrupt elite of the regime, turned out to be under close scrutiny.

The money troubles for the "fighting nation" started some time ago. At the beginning of October, the European Commission discussed quite cheerfully the issue of financial support for Ukraine next year, in total it was planned to allocate 18 billion euros. Only the voice of the “pro-Russian” Hungarians stood out from the chorus of unanimous approval, reasonably reminding of problems within the EU itself.

Perhaps if the Kyiv temporary workers had behaved more tactfully, then Budapest would have been more accommodating, but Zelensky and the party lord continued to “twist their fingers”. Hungary was downright required to unequivocally decide on whose side it is on - "good" or Putin's "evil". The pressure on the ethnic Hungarians of Transcarpathia increased: in particular, at the end of October, a memorial sign (the figure of a turul bird) was dismantled from the castle in the city of Mukachevo, which occupies not the last place in the history of the formation of a sovereign Hungarian nation, replaced by a Ukrainian trident.

The diplomatic scandal that erupted over this, of course, played a role. On November 8, at the next meeting of the EC on the issue of financial assistance to Ukraine, Budapest decisively blocked the 18 billion tranche for next year. And as if that were not enough, the European Commission, referring to new circumstances, shifted far to the right and the timing of the transfer to Kyiv of the last 3 billion from the package of 9 billion euros of "additional help" adopted back in May.

However, during the entire conflict, the EU speaks a lot in favor of poor Ukrainians, but methodically sabotages any material assistance to them. The main source of "luxury" was and remains the States - but from there, frightening bells for Zelensky also began to be heard.

Republican congresswoman Green, who during the election campaign in the United States was noted for numerous attacks against Kyiv dependents, after the election did not renounce her promises. On November 17, she, House Armed Services Committee member Gates, and several other Republican congressmen introduced a bill to audit all material assistance provided to Ukraine since the beginning of the conflict. Given the dubious advantage of the Republicans in the House and the absence of one in the Senate, it is most likely impossible to turn the bill into law, but its very appearance clearly marks the beginning of the sabotage of any legislative initiatives aimed at new assistance to Kyiv.

This just descended into Congress from the White House on November 15: instead of the 50 billion previously assumed, now we are talking about only 37,5 billion dollars. Characteristically, 21,5 billion of this amount is proposed to be spent on paying for weapons (for comparison: everything that has already been transferred by the States since the beginning of the conflict is estimated at 21,7 billion), while only about a billion or so. It can be assumed that the American arms magnates will most likely get theirs, but the Ukrainian energy companies may not get anything.

In parallel, the offensive of the Republican Chamber against Biden begins personally. On November 17, Congressmen Comer and Jordan announced the creation of a committee that would investigate the activities of the president himself and his son Hunter for abuses of position and threats to the notorious "national security" of the United States. The organizers of the committee claim that they already have compromising evidence and that they only need to carry it out "according to the law."

Very opportunely, last week, the fifth largest cryptocurrency exchange in the world in terms of operations, FTX, went bankrupt, after which another ugly facts, including those related to Ukraine, came to the surface. In particular, a dubious scheme of the leadership of the crypto-exchange and Ukrainian officials came to light, according to which 50-70 million dollars disappeared in an unknown direction: donations made by cryptocurrency holders from all over the world allegedly went to purchases for the Armed Forces of Ukraine, but were actually cashed and stolen.

There are assumptions that in a similar way (dollars - cryptocurrency - Kyiv - Washington - dollars - someone's safe) through the "laying" FTX could be laundered billions of the amounts allocated by the US budget to support Ukrainian harem pants. Meanwhile, the now-defunct exchange was directly linked to the Bidens: a young FTX owner with the very apt last name Bankman-Fried recently donated $40 million to the Democratic Party campaign, while his mother, a Stanford University professor, raised money for the presidential election in person "Sleepy Joe" .

Against the background of all these “troubles”, it is not surprising that the UN urgently dragged the topic of “Russian reparations to Ukraine”. Direct injections from the budgets of Western countries are up in the air, and the requisition of frozen Russian assets may be the only way to somehow feed the bottomless Kyiv abyss.

A million customer gets a baseball cap as a gift

Unlike money, the need to supply the fascist army with weapons is not questioned - but this does not mean that there are no problems with it. On the contrary, their heap is only growing, approaching the level of quantitative-qualitative transition.

One of them is the same corruption. On November 11, reports appeared that our agents had purchased from the enemy a whole 227-mm GMLRS rocket used in the M270 and HIMARS MLRS. Moreover, unlike summer applications for the acquisition of CAESAR self-propelled guns in the same way, this time there are photographs of a carefully disassembled rocket.

In general, this week was rich in news about Ukrainian artillery - varied, but extremely unpleasant for the enemy. We are talking about the numerous facts of the destruction of precious imported self-propelled guns and MLRS by Russian Lancet kamikaze UAVs, and the fact that the Ukrainian fleet of PzH-2000 self-propelled guns is breathing its last due to a lack of spare parts. In a peculiar way (on the verge of mockery), the good news sounded that Slovakia had finally sent a whole fresh 155-mm self-propelled gun Zuzana-2 to Ukraine.

The new British Prime Minister Sunak, who arrived in Kyiv on a visit on November 19, sweetened all this vinaigrette a little. He promised Zelensky a huge package of diverse air defense assets, including 1000 anti-aircraft missiles, anti-UAV weapons and 125 anti-aircraft guns. The last point is very curious: hypothetically, modern barreled artillery systems can become a serious obstacle in the way of Geraniums ... If, of course, they are delivered.

It is not entirely clear where London plans to get so many anti-aircraft guns. The British army itself is armed with a dozen 20-mm six-barreled installations, which are the ship's Phalanx CIWS rearranged on a land trailer.

But there is an opinion that the Armed Forces of Ukraine will not get anything fresh, but we are talking about the old Czechoslovak 12,7-mm, or Soviet 14,5-mm ZPU, or 23-mm ZU-23-2 - fortunately they use standard Soviet ammunition and it can be assumed that a sufficient number of similar ones are at hand (for example, taken as trophies from Hussein's army). News from the Czech Republic speaks in favor of this version: on November 14, a collection of donations was opened there for 15 Viktor anti-aircraft installations, which are a Soviet ZPU-2 modernized by a local company.

After air defense, the second most important problem for the Armed Forces of Ukraine now is preparation for winter. At first glance, everything is not so bad with her: the German press writes about 2430 field generators already delivered, the Canadian government promises 500 thousand sets of winter uniforms, and Sweden promises winter uniforms. The question again is when this will all be staged.

However, this issue has dominated all military supplies from the West for a month now. The anti-aircraft systems promised by Spain almost immediately after the start of Russian strikes on infrastructure are still “driving”, the miserable 20 police armored cars allocated by France are also, and so on and so forth. At this pace, warm clothes can either bring you up by spring or not at all.
Reporterin Yandex News
Reporterin Yandex Zen
4 comments
Information
Dear reader, to leave comments on the publication, you must sign in.