The situation in Pakistan: from humanitarian catastrophe to civil war 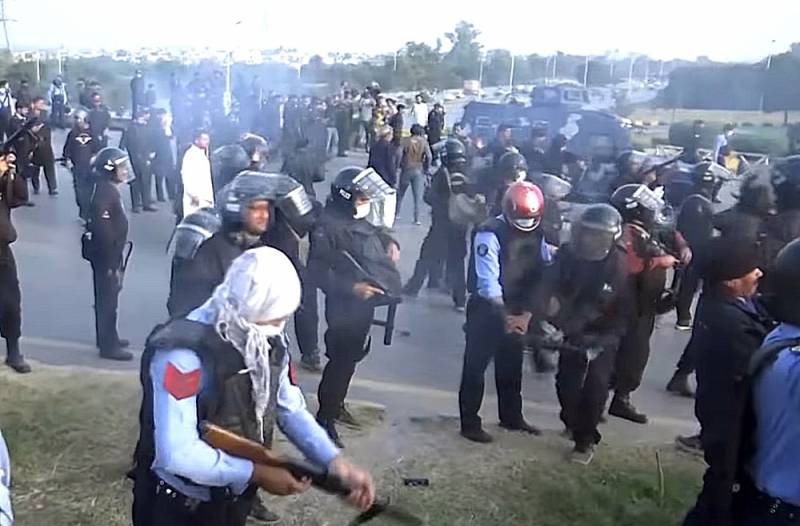 Pakistan does not often flash in news reports, recently - mainly in the vein "Islamabad increased military cooperation with such and such a capital." But in the complex knot of Transcaucasian-Central Asian contradictions, Pakistan is, perhaps, the hottest point at the moment.


This year has obviously not been a good one for the country: it spends it in a continuous series of natural disasters and terrorist attacks. From above, she was also covered with a tough power struggle between the deposed "people's" prime minister Khan and the Sharif clan, from which brother Shahbaz now sits in the prime minister's chair, and brother Nawaz (former prime minister of Pakistan four times) is in London, providing support " world community".

But if during the summer political the confrontation, in general, remained within the “peaceful” framework (approximately as in the United States, adjusted for the local national flavor), then in the last couple of weeks the situation has sharply escalated. "People's Candidate" Khan took a decisive step towards escalating and transferring the conflict to the power plane - however, not without help from his opponent Sharif.

In general, it is difficult to pick up any unambiguous emotional characteristic for the Pakistani internal conflict. Here in Libya or Syria, it was immediately clear who (relatively speaking) is “good” and who is “bad”, and not in terms of political benefit or disadvantage for the Russian Federation, but in the “universal” sense.

In Pakistan, both are "good". Both Khan and the “collective Sharif” come from the colonial aristocracy, very Europeanized in their personal mentality (perhaps even more than the current British Prime Minister Sunak). At the same time, neither the former nor the current head of the Islamic Republic can be called outright compradors and / or incompetent upstarts like current European politicians - on the contrary, they are quite patriots in the spirit of Erdogan, and are just as multi-vector.

This is where some differences begin: Sharif has more vectors directed to the West, while Khan in this regard is a kind of “friend of the whole world”, guided in foreign policy by the practical expediency of certain projects. In this regard, Sharif enjoys some support from the West, although, basically, it does not go beyond "talking in favor of the poor", but all because the current "pro-Western" prime minister did not show much desire to "be friends" with the white masters against China (and in to a lesser extent - Russia).

In general, it is not surprising, since the PRC is the largest investor in the economy Pakistan, which has invested about $60 billion in infrastructure projects over the past few years, and in the midst of the COVID-19 pandemic, threw in medical humanitarian aid. In addition, the Pakistanis are invited to “befriend” China by firmly holding hands with the “fraternal” Indian people, and yet the intensity of “love” between them is much greater than between the same Bandera and Poles.

At the same time, Sharif could not count on any benefits from spitting in the hand of the feeding Sharif: the West did not promise pressure on India in the territorial issue (and how to put pressure when it also needs to be set against the Chinese and Russians as much as possible), but financial "aid" from the IMF would turn into a real bondage for the country. And no matter how bugs the brothers Shahbaz and Nawaz may be, they have not yet descended to the level of a conditional Scholz, who sells the fatherland for a small bribe.

Pros and cons of radical solutions

However, the disapproval of the West had little effect on the stability of Sharif's position. He now has exactly two main problems: the inability to stabilize the social situation in the country and the unwillingness to surrender power.

The internal situation in Pakistan is frankly bad and does not show positive dynamics. The spring drought, which destroyed the seedlings, has put the state - the exporter of agricultural products in front of the need to purchase large volumes of food, otherwise a real famine is inevitable. However, the treasury does not have the money needed for this, especially since the global economic crisis is raging overboard and food prices are only rising.

At the same time, the terrorist and military threat is growing. The truce with the TTP, the Pakistani wing of the Taliban*, which had been prepared for many months, was actually thwarted: the Taliban* put forward extraordinarily additional demands, the authorities did not comply with them, as a result, both sides continue to attack each other. Both those and others are attacked by militants of the local branch of the IS *, for the fight against which the peace treaty with the Taliban * was supposed to release government forces.

Meanwhile, the Afghan Taliban*, who have established themselves in power, are eyeing the Pakistani province of Gilgit-Baltistan, which has the most important transport significance (it is in this province that the bulk of Chinese investment has been invested). An open war between Afghanistan and Pakistan has not yet begun only because the different "parties" of the Taliban * cannot share power among themselves, and even they themselves are forced to fight the Afghan armed opposition. In the south, India is watching the situation even more closely, waiting for the final plunge of Pakistan into chaos to invade the disputed states of Jammu and Kashmir.

It is obvious that Sharif's brilliant "successes" in the fight against all this mess play into the hands of his political opponent. Although former Prime Minister Khan left office in April this year amid a corruption scandal (generally the main reason for resignation for local politicians), his TII party remains the largest in the National Assembly (lower house of parliament) of Pakistan. Personally, Khan - a real charismatic "leader" - remains very popular among the masses, and even among the security forces. Speaking with an open mind, there are big doubts that he would have handled the crisis much better than Sharif, but hope, as you know, is the last to die.

The faction of Sharif's PML(N) party, which competes with the TII, is almost one and a half times smaller and was able to create some advantage only through a coalition with many small parties. Not very opportunely On October 16, by-elections to the National Assembly and the Assembly of the main province of Punjab were held, in which the TII once again confirmed its popularity, taking six out of eight and two out of three seats, respectively.

Fearing that such a confident victory of his rivals would knock out the most unstable allies from the coalition, Sharif did not think of anything better than ... to annul the election results under a far-fetched pretext. A court decision suddenly appeared against Khan himself, finding the TII leader guilty of concealing income and forbidding him from being elected to government bodies for the next five years.

Then decided to raise the stakes and Khan. On October 26, he called on his supporters from all over the country to advance to Islamabad to protest the arbitrariness of the authorities directly to Sharif - and Khan's fans responded to the call of the leader. Literally all the roads of Pakistan were filled with crowds heading to the capital, despite the fact that there are already full of supporters of the former prime minister, who regularly hold rallies in his support. Anticipating this move, the government in early October tried to strengthen the security of Islamabad, calling in the city about 30 thousand policemen and gendarmes from the provinces, but the regional heads of security forces, many of whom sympathize with Khan, sabotaged this order.

Meanwhile, the former prime minister himself also headed for the capital - and already on the outskirts of it, in the city of Vazirabad, on November 3, an attempt was made on him: two unknown persons fired at Khan's motorcade with automatic weapons. He himself and two of his closest associates from the leadership of the TII received moderate injuries, three more people died.

Official Islamabad immediately came out with a sharp condemnation of the assassination attempt - but this did not help. Having recovered a little from his wound, on November 5, Khan, in another online speech, directly called Sharif the organizer of the attack, allegedly based on information from his agents in the capital, and called on supporters now to a violent revolt against the "criminal regime." However, fans of Khan and without his team did not sit idly by.

In fact, Sharif, with his rather precarious position, is unlikely to organize the liquidation of a competitor - the explosive popular reaction was more than predictable. The attempt could well have been a provocation by the Taliban *, or "black", or even Indian special operations forces, aimed at decisively destabilizing the situation.

Be that as it may, this very destabilization is now evident. Clashes are taking place all over the country between "simple" rebels and law enforcement loyal to the government, while Khan's supporters from among the security forces do not intervene in the situation. Against this background, the really great foreign policy success of Sharif, who managed to beg China for a preferential loan for $8,8 billion, was easily lost.

Now this money, which should have been spent on food and social needs, may well go into the sand. Khan himself, in his speeches, repeatedly emphasized the danger of the collapse of Pakistan and the loss of control over nuclear weapons if the political crisis continues. It seems that in pursuit of his ambitions, the former prime minister willy-nilly make this fairy tale come true, and this is fraught with big problems for the entire region.