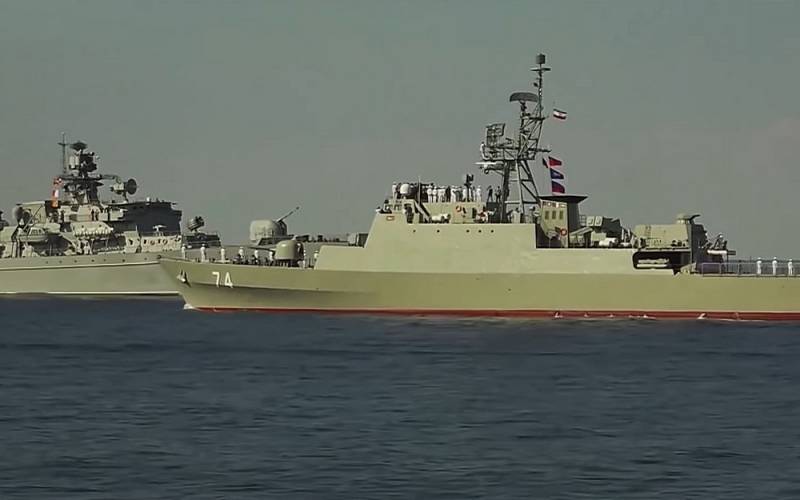 Recently, American rhetoric regarding Iran seems to be becoming more belligerent, which gives some analysts grounds for reasoning about the possibility of a direct clash between Washington and Tehran. And indeed, if the statement of "Sleepy Joe" on November 4 that "America will soon liberate Iran" can be attributed to the age of the grandfather and his unstable connection with reality (who can be sure that he did not mix up Iran and Ukraine consonant in English?), then the press -Secretary of the State Department Price, who promises to protect Azerbaijan from the Persians - it seems that he is not yet a senile.


Indeed, to overwhelm and destroy Iran right now, against the backdrop of expanding Russian-Iranian military and economic cooperation, would be very, very handy for the Americans, but not so much as to climb into hell with their own hands. Fortunately for them, the States are far from having exhausted their reserve of influence in an extremely difficult region, where there is someone to substitute for Tehran - or rather, there is someone to set the Iranians themselves against.

The axis around which the flywheel of pressure on Iran is turning is the civil conflict in the Islamic Republic, which the authorities have been unable to extinguish for almost two months now. It must be admitted that the ideas of emancipation abandoned from the outside fell on very fertile ground, so that the “maiden power” became and continues to be the foundation of the entire “revolutionary struggle” against the ayatollah regime.

She also serves as her banner in Western propaganda, which presents the whole situation in the vein of "the women of Iran, with the support of the best and most modern of men, are fighting for liberation from centuries of patriarchal oppression." Characteristically successful footage from the video recorder of some Iranian motorist, replicated a few days ago: a young woman leans out of the top hatch of a car standing in a traffic jam, rips off her hijab - and then a street florist runs up to her and puts a scarlet rose in her hands. To be honest, I don’t know how widespread the sale of flowers from hands right on the highway is in Iran, so I won’t say that this episode is staged - but I won’t be surprised if it turns out to be so later.

However, the real "revolution", of course, looks a little different: with a much smaller volume of sugar snot, but a much larger volume of bloody snot. The main arena of hot clashes is still the northwest of the country, as well as the southeast. On November 4, just under the announcement of Biden the liberator, fierce street fighting between the rioters and the police took place in the city of Khash, "dozens" of killed and wounded on both sides were reported from the field - of course, with an emphasis on the "bestial cruelty of the dogs of the regime." True, at the same time there are many videos of wounded and dead Iranian security forces torn to pieces by the crowd.

Through social networks, protest elements are being broadcast and trying to impose an imitation of a new “trend” of attacks on men in turbans (mostly clergymen) in order to steal these same headdresses. There are several recordings with funny guys on mopeds who tear off their turbans on the go and leave, showered with curses. Naturally, it is argued that it is already a mass phenomenon throughout the country - but, most likely, not yet, so far only an instruction written down by a specially trained vanguard of "freedom fighters". And - again, naturally - this is presented as an innocent joke in the best traditions of "they are children."

For contrast, stuffings are made, designed to demonize the current system. So, on November 8, a number of sources (first foreign, and then not particularly discriminating Russian-speaking) reported that the Iranian Majlis (parliament) allegedly almost unanimously decided to execute all the rebels arrested for participating in the riots. This measure supposedly should serve as a signal for the rest, and it is planned to lay on the scaffold about 15 thousand people. Alongside this (apparently for greater authenticity), a much more realistic message was launched that the death penalty threatens the famous Iranian football player Daei, a former member of the national team who took part in the riots in the city of Sekkez.

Restricting access to the Internet, as the main source of "sedition", remains one of the unresolved operational tasks in the fight against civil instability. According to indirect information, the foreign curators of the "black headscarf revolution" managed to establish some sort of smuggling of Starlink terminals, which allow the "liberated women of the East" not to lose contact with their superiors. And the nature of the audience, on which the Americans and "allies" have relied, almost completely eliminates the "danger" of turning on her head: girls, as they say, are such girls as their salivating boys.

The Iranian authorities, for their part, demonstrate a complete lack of readiness to make any concessions - and if in a tactical perspective this is absolutely true (it is necessary to smooth the corners after the violent suppression of a riot), then in an operational one it contributes to prolonging the unrest. It is quite obvious that something needs to be changed in the conservatory (not so much, in fact), but the top of the Islamic Republic is not yet ripe for change.

Fortunately, Khamenei's Supreme Leader is still holding out (in terms of physical health), and it is vital for Tehran to extinguish the current conflict while the ayatollah is alive. Khamenei's death will in any case spark a new wave of civil tensions, but there is a difference in whether Iran's enemies have to break it off from scratch, or rock an already rough sea.

As for the foreign policy contour, it was not in vain that Price suddenly started talking about US support for Azerbaijan. The fact is that on October 17-19, the combined-arms grouping of the IRGC conducted quite large exercises on the border itself, having crossed to an island on the border river Araks; in the last ten days of the month, exercises of the Iranian army also took place nearby. The maneuvers were clearly intended not only for military training proper, but also political pressure on Baku.

Tehran has several reasons for flexing its muscles. First of all, there is an intricately intertwined conflict of interests around the notorious Zangezur Corridor, which is located at the southern tip of Armenia and has the potential to link "mainland" Azerbaijan with the exclave, the Nakhichevan Republic. In the past few months, there have been positive (for Azerbaijanis) shifts in the status of the disputed territory, and the construction of a road to Nakhichevan has already begun.

For Iran, these shifts are not positive, since they deprive it of part of the cargo transit (not only to the Azerbaijani exclave, but also to Turkey) and increase Ankara's influence in the region. Friction between Iran and Turkey, despite the partnership within the SCO, does not disappear.

In addition, Azerbaijan is one of the nests of "professional revolutionaries" who then go to work in the fields in the northern regions of Iran, where a significant number of ethnic Azerbaijanis live. In Azerbaijan, various NGOs are also being acquired, which are now promoting “black scarves”. However, Iran itself has certain views on Nakhichevan and conducts its own propaganda in the exclave, aimed at forming a pro-Iranian annexation movement there.

On the other flank, the potential of the Iranian-Saudi conflict is swaying heavily. On November 1, some sources in Saudi Arabia reported that an Iranian attack on the kingdom's oil refineries was supposedly expected in the near future. Iran, in turn, is indeed showed propaganda "cartoons", in which kamikaze UAVs, suspiciously similar to Shahed-136, hit some "enemy objects".

This was followed by a mutual information-diplomatic squabbling. The United States deployed an F-22 squadron in Saudi Arabia to counter the "Iranian threat", the kingdom announced the severance of special ties with the Islamic Republic (there are no full-fledged diplomatic relations between the countries) and conducted joint naval exercises with the United States and Great Britain. Iran responded with a series of "last warning" statements.

But although the countries have the deepest political and religious differences, the Saudi dynasty is one of the traditional sponsors of any intra-Iranian mess, and Iran is the Yemeni Houthis opposing the Saudis, there are still no reasons for a real dumping into a military conflict. There is an opinion that the entire "aggravation" is an intrigue of Saudi diplomacy, designed to keep the attention of the United States.

As you know, relations between the States and the kingdom are not the best now, due to the intractability of the latter in the oil issue. The Americans even talked about a possible cessation of the supply of military products - this despite the fact that the Saudi army is mostly equipped with Stars and Stripes weapons. And here, just in time, the "Iranian threat" - not to throw the poor sheikhs to the ayatollahs to be devoured? By themselves, the Saudi troops, according to the experience of fighting the Yemeni rebels, to put it mildly, do not shine.

And the moment is not yet the same. But at an advantageous moment - the moment of a change of power in the Islamic Republic - both this and other (with Turkey, with Israel) conflicts on the Iranian border can turn from virtual into real overnight.
Reporterin Yandex News
Reporterin Yandex Zen
5 comments
Information
Dear reader, to leave comments on the publication, you must sign in.