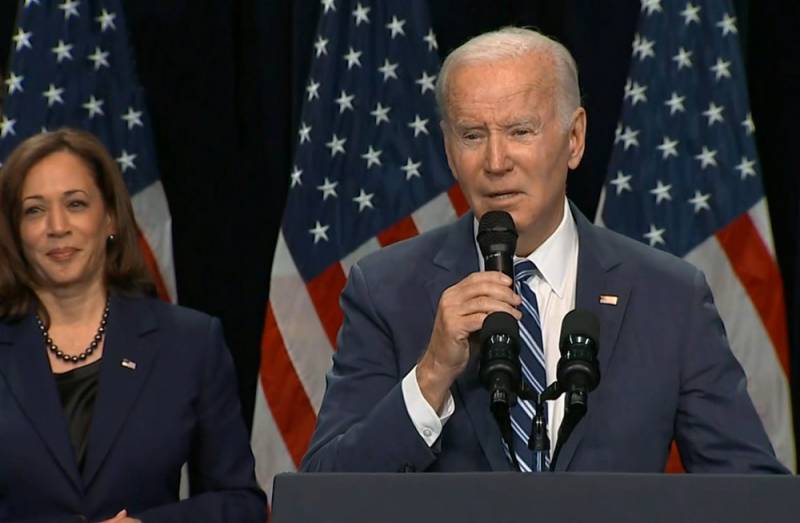 Perhaps, in no other country in the world did they follow the elections in the United States as closely as we do, and this is understandable: you always want to believe that the main strategic enemy will run into what he is fighting for - the notorious "democracy". In a sense, that's how it happened.


The elections to the Congress gave a curious result: the collapse of the Democrats, the foreboding of which was already almost visually observed, did not happen ... Which means the de facto collapse of the Republicans - at least their “program”, built mainly on the denial of the course of the Democratic Party. And how many big words and pre-opened bottles of champagne!

But the resulting epic sob instead of the promised explosion puts under a huge question mark all the immediate prospects of the Republicans, especially in the 2024 presidential election. The most far-sighted of the party members are already fidgeting nervously in their chairs, because an alternative is on the agenda: either everyone personally capitulates to the impending police dictatorship "democrats", or all together dump the situation in the direction of a power struggle for power. But that's just unity in the ranks of the Republicans and is not observed.

"Donkeys" from the underworld

The final results of the elections are still unknown. In a number of states, not all ballots have yet been counted, and in the state of Georgia, where the Republican and Democratic candidates scored an equal number of votes, preparations are already underway for the second round, which will take place on December 6.

What does it mean? First, that despite all the failures of the Democrats, the Republicans were unable to offer the masses an alternative that would captivate them and lead them to vote for the “elephants” (as the Republican Party is called in slang). Yes, “Sleepy Joe” and his team of non-traditional henchmen led the country into some dubious jungle - however, the voter dissatisfied with Biden did not believe that Trump and his conservatives would really change this course.

Secondly, against such a background, a very ugly embarrassment can come out, in which the Democratic Party will decisively catch up with the Republicans in the lower house and get to about 213-215 seats, and even in the Senate the seats can be distributed equally. And then, although the Republicans will have a formal minimum advantage, the Democrats will have real administrative levers in their hands to push through their decisions, both legal and not so.

The fact is that if in the Senate on some issue the votes are distributed equally, then the vote of the US Vice President, who is a member of the Senate, is decisive at the moment, it is Democrat Harris. In the chamber, despite all the party discipline, there are often characters like "republican / democrat only in words", more or less regularly taking sides political opponents. It has always been so, and even more so it will be so now: this year the “democrats” have repeatedly shown blatant impudence even by American standards, openly pressing on objectionable people under various pretexts.

Actually, there are a lot of questions to the very course of voting. The election of two deputies from the Democratic Party, who recently left for the cemetery, has already become a meme. Formally, everything is hidden: citizens died at an extremely good time, when making changes to the electoral lists is already prohibited by law, and the Democrats, of course, did not bother to inform their “regular clients” that their “beloved” pensioners are already in the best of worlds .

Almost everywhere there were massive failures of automated systems for voting, and where it was conducted in the old fashioned way, there was either a “lack of ballots” or amendments to them by members of election commissions. At least one polling station had to be relocated due to bomb reports. Incidents with non-admission to the polling stations of observers were noted everywhere.

However, here it must be borne in mind that some of these problems could have been created just by pro-republican "saboteurs". To find out who could benefit from “anomalies” in the course of voting in each specific case, it would be necessary to evaluate the ratio of incidents to long-term statistics in the respective districts, and then these would be only estimates, not facts.

However, in general, against such a background, the Democratic Party still has room for maneuver with “dead souls”. In addition, there is always also a map of "Russian hackers" who are known to vote in any American election more than the Americans themselves. Here, Prigozhin’s sarcastic statement made on November 7 that “Yes, we are interfering and will intervene,” and funny pictures made by Russian comedians a la “Tell me, where is the tab for voting for the Senate on Gosuslugakh?” Judging by the quality of the fakes that the American media sculpt on almost any topic, they may well present these jokes to the audience in all seriousness - and after all, a large part will believe it.

The worst is the enemy of the bad

If we ignore the boring numbers, then the main qualitative result of the past elections is a clear demonstration of the internal split in the Republican Party. Unlike the Democrats, who more or less voluntarily, but act as a united front, the Republicans are separated into at least three conditional factions: the hawks, led by the leader of the parliamentary faction McConnell, the isolationist conservatives, led by Trump, and another isolationist conservatives, but already under the banner of the re-elected (simultaneously with the parliamentary elections in the United States, there were also gubernatorial elections) "the owner of Florida" DeSantis. It must be understood that "leadership" here is meant symbolically, "standing ahead" of a certain group of interests, and it seems that the real antagonism between these groups is only slightly milder than between Republicans and Democrats.

However, the Trumpist faction may soon cease to exist, just like Trump himself as a political entity. With his eccentric manner and controversial reputation for the Republicans, he has become an obvious ballast that damages the image of the party. According to rumors, while officially declaring victory, on the sidelines, the “elephants” attribute their failure to Trump, who shocked the public too much: indeed, “not only everyone” supports such Republicans.

In addition, if the “elephants” still do not get an advantage in the House of Representatives (which is very likely), then they simply will not be able to “get off” Trump at least in the case of an attempted coup, and they are also unlikely to be allowed to arrange purges in the FBI - which means that the case of the leak of classified information will also remain open. In this regard, Trump's narcissistic speeches to voters lose their meaning: of course, he can promise to nominate his candidacy for the presidency, but he cannot do it.

However, it will not be easy for them to get rid of Trump: no matter how things go, in the end he will almost certainly shout out something about “treason” and the rotten essence of the party members who “set him up”. And, in principle, the removal of such a solid "card" will compromise the entire Republican "deck": then he was your main one - and now you threw him off, how is it?!

Meanwhile, the "donkeys", as the Democrats are also called, have already begun to consolidate their positions by conditionally legal methods. Actually, the elections themselves in a number of districts were held under the close supervision of the FBI and special teams of the National Guard, so it can be assumed that in some places (where necessary) these wonderful people could “reveal violations”, which they later blame whoever they need. The hero of the Internet, Mask, was not forgiven for Trump's open support and, in general, excessive self-confidence: Biden himself said that the billionaire should be checked for ties with foreign countries, and there is no doubt that they would be found.

But the situation of the actual irreconcilable split of society in half opens up opportunities for illegal struggle for the Republicans as well. Although the muddy type who attacked Pelosi's husband with a hammer, judging by circumstantial evidence, was not “political” and not crazy, but ... an offended lover of Mr. Pelosi (which is why the case was hushed up quickly), he nevertheless created a precedent. If the "donkeys" really begin to trample the "elephants" as zealously as they intended, then the latter may decide that it will be more interesting to die with music, and raise their exalted supporters to rebellion.

However, the Democrats are not quite asses and understand everything. In particular, in the same district of Maricopa, famous for the failure of electronic ballot counting systems, reinforced police squads were introduced immediately after the closing of polling stations. Across states, preparations are being made for an outbreak of violence: shops are boarding up shop windows, locals are warning friends to be vigilant, and so on.