An island of bad luck in the Caribbean: American "humanitarian intervention" in Haiti 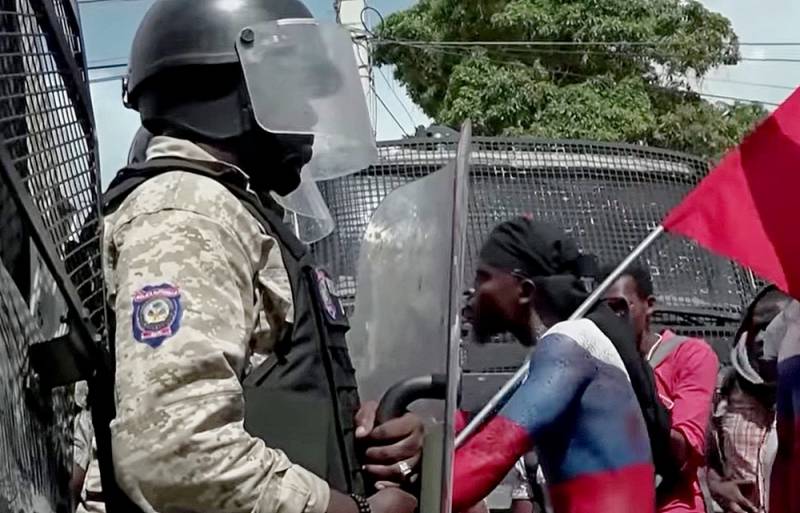 On the eve of the elections to the US Congress, Russian journalism more than once or twice expressed the opinion that the Democratic Party could organize some kind of “small victorious war” to ... raise its own prestige. The idea is very strange, especially since such "small" countries as Iran or even China (in the vein of "defending Taiwan from communist invasion") were indicated as a potential arena for raising the rating.


In fact, much more approval of the American society (at least, that part of it that can still somehow think) would cause the curtailment of at least part of the military and "police" operations that the States are already conducting. But it is obvious that conscientious American citizens will not wait for such a gift, because democracy is constantly in danger here and there.

At the moment, one of these "dangerous places" is Haiti - an island and the republic of the same name located in its western part. Hiding behind a plausible pretext and the authority of the UN, the Americans are building up their military presence in it to "fight" the humanitarian crisis. The crisis itself, however, is not an invention.

It's bad to be poor and sick

Oddly enough, there is a certain similarity between Haiti and... Moldova. Like the last one is the most indicatively restless country in Europe, and Haiti is about the same in Latin America. True, the average degree of social tension in the New World is much higher than in the Old, so Haiti is now a reference branch of hell on Earth.

It is not quite obvious, but the humanitarian crisis raging on the Caribbean island is a distant echo of the military conflict in Ukraine, or rather, the measures taken by the West to support the fascist Kyiv regime. As you know, the sanctions imposed on the Russian oil and gas industry have led to a sharp jump in carbon fuel prices around the world, which has had a particularly negative impact on the poorest countries.

These include the Republic of Haiti, and closer to the bottom of the rating: 25% of the country's official GDP is provided by remittances from migrant workers who left for the mainland, and 60% of the ten million population are below the poverty line. Until recently, the government subsidized the fuel industry, which made it possible to keep fuel prices and inflation in general, allowed people to somehow make ends meet. On average, subsidies cost about a fifth of the meager national budget.

Rising global inflation easily upset the fragile "balance" of this system. During the year, food prices on the island increased by 1,5-2 times, which means starvation for the majority of the population. The demonstrations that began back in the spring with demands to curb price increases were not successful, but they led to a surge in criminal activity: according to the good old tradition, local authorities attracted drug cartels to “put things in order”, whose members were centrally distributed weapons. The competition between gangster "families" for the "state order", in turn, led to the beginning of a criminal war, similar to the one that is blazing in Mexico.

Naturally, against the background of such an “anti-crisis policyThe situation could only degrade further, which she successfully did. On September 12, due to lack of funds, fuel subsidies were officially canceled, which led to a new surge in the prices of essential goods and food riots throughout the country. At the end of the month, the militants of one of the cartels “squeezed” the most important oil terminal in the republic in Varra from government forces, exacerbating the fuel shortage even more. Lack of fuel and power outages caused the shutdown of water treatment plants, which led to cholera outbreaks - with virtually paralyzed medicine.

As the outlook looks even more bleak, on October 5, the Prime Minister of the Republic of Haiti, Henri, addressed the "world community" with an outstretched hand. Well, which of the members of this very "community" considers himself the main "defender" of the Caribbean?

Captain Monroe and his crew

Almost immediately after Henri's tearful request, the Haitian socialist opposition accused him of calling for foreign intervention - and they were not mistaken. Already on October 12, the US State Department announced that the emergency situation in Haiti requires immediate intervention. On October 16, the United States and Mexico submitted to the UN a draft resolution on the deployment of rapid reaction forces in the island republic, designed to suppress the outbreak of violence and eliminate the humanitarian crisis.

But on October 15, the international departments of the United States and Canada published a joint statement on the start of deliveries of weapons and equipment to Haiti, ostensibly for local police forces. On October 16, the first transport workers of the American and Canadian Air Force landed at the airport of Port-au-Prince, the capital of the republic, and an American border ship approached the coast. Then additional units of the marines were deployed "to guard the embassy" (which, by the way, is larger than the palace of the President of Haiti, and has its own fuel terminal) and a hospital ship.

The unhurried accumulation of forces continues to this day. The press quite actively speculated that the official start of the "humanitarian operation" would be announced after the congressional elections, and perhaps even that it would go under the auspices of Canada in general. This is an important remark to the issue of US prestige in the international arena (and the "independence" of the Canadian elites, not to mention the Mexican ones). However, Canadian society, which is experiencing approximately the same difficulties as the American one, is not very approving of this whole undertaking.

No matter what American officials say, everyone understands everything perfectly: there is a classic, in fact, “banana” intervention under a speculative pretext, perhaps somewhat imposing compared to historical examples (at least the same invasion of Grenada in 1989) the actual "bananas" are likely to be local deposits of gold, copper and (most importantly in the context of the embargo on Russian aluminum) bauxite. Unlike the Dominican Republic located on the same island, Haitian deposits of non-ferrous metals are almost not developed - and it seems that Uncle Sam decided to correct this misunderstanding.

The local population perfectly understands what's what, and is not very happy about the appearance of the American "saviors". Anti-government demonstrations in the republic also became anti-American, in addition, a number of rallies against the intervention were held by the Haitian diaspora in the United States. It is characteristic that on some of them the islanders waved Russian flags and chanted chants like “Russia, come, put things in order” addressed to our country. And although Russia now objectively does not have such an opportunity (and desire, perhaps, too), American propaganda did not fail to talk about the "Russian trace" in the crisis in Haiti.

Obviously, with the advent of American troops, the chaos on the island did not decrease at all - this is not part of the tasks of the contingent. Cartel reprisals against activists and random victims continue, moreover, they "unexpectedly" acquired an even more brutal and revealing character. On October 29, the leader of one of the local parties opposed to the American invasion was killed from an ambush. A couple of days ago, the United States and Canada also imposed official sanctions against objectionable Haitian politicians and officials (including the chairman of the Senate), in this sense equating them with the leaders of the local drug mafia. There is no talk of real humanitarian assistance to the local population.

Unfortunately, the American presence makes the crisis on the island in principle unresolvable: even if someone tried, say, to establish anti-epidemic measures, the invaders would nullify all efforts, not by washing, but by rolling. So the inhabitants of the "island of bad luck" can only sympathize. But the citizens of Europe, looking at this situation, should think about where else overseas “humanists” can turn their eyes: one hundred thousand American troops on the continent are no joke.
Reporterin Yandex News
Reporterin Yandex Zen
3 comments
Information
Dear reader, to leave comments on the publication, you must sign in.