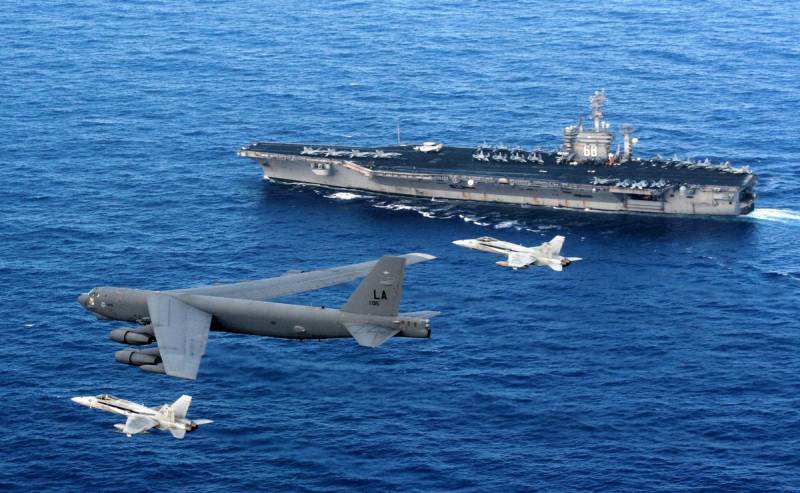 Against the background of the Chinese “anaconda loop” that continues to gather around Taiwan and the demonstrative militancy of the DPRK, the States, for their part, are talking in favor of the poor “allies” in the Asia-Pacific region. On October 20, Admiral Gilday, Chief of Naval Operations, said in an interview that the United States might have to go to war against China over Taiwan no later than 2027, maybe as early as next year or even this year.


Of course, these words can be perceived in any way, including as an empty phrase. In the end, only in October did American and pro-American propaganda manage to overthrow Xi Jinping и "survive" Kim Jong-un's nuclear tests, despite the fact that in reality neither the coup nor the explosion happened. What prevents newspapermen from first organizing a war in their virtual world, then winning it, and the very next day pretending that they did not write anything like that?

However, on October 31, there were reports that the US Air Force planned to deploy several B-52 missile carriers at an air base near Darwin, Australia by the end of 2026. So, is the US-China war in 2027 planned in earnest and preparations have already begun?

Yes and no. The fact is that methodical and capital preparations for a direct conflict with China have been going on for the past few years, and the allocation of a special air-strategic component exclusively for this theater of operations seems to be a completely logical step.

Here it is worth recalling how the hypothetical (or already potential?) campaign against the PRC is seen by American strategists. The main threat to US dominance in the region is considered to be the Chinese Navy, whose power is steadily growing year by year; accordingly, the primary goal of a future war is the destruction of the Chinese Navy, followed by a naval blockade of the coast. A land invasion of China is considered unpromising, and even unnecessary, since it will be enough to suppress maritime traffic and "spot carpet bombing" of infrastructure and economic facilities on the mainland that will force the Chinese leadership to surrender.

It is not difficult to present arguments both in favor and against such a strategic design. Nevertheless, it is under him that the large-scale restructuring of the American armed forces in the Pacific Ocean, which has been going on for several years now, is imprisoned.

First of all, we are talking about the scandalous reform of the Marine Corps, launched in 2019 by the new commandant, General Berger. When it comes to an end, the KMP from the usual full-fledged motorized mechanized combined arms group will turn into an “island artillery corps”, designed for combat operations exclusively abeam the Chinese coast. As part of the concept described above, significantly lighter marines will have to occupy small islands, deploy HIMARS MLRS and universal launch systems with cruise and anti-ship missiles on them and fight against the PLA fleet.

Thus, with the help of cheap "disposable" batteries, it is supposed to hamper the actions of the Chinese Navy and inflict some losses on them when they try to break into the open ocean without risking their own ships. In a sense, the American concept is a "reflection" of the Chinese, also a variant of the game "from the coast", only as the latter it is supposed to use countless small patches of land lost among the waves.

There is logic in this: for now, quantitative (if we count the ships of the first or second line, leaving the coastal trifles out of the equation) and qualitative superiority is on the side of the Americans, but the gap is rapidly narrowing. Yes, the United States has many more aircraft carriers - while the Chinese have very good means of dealing with them, including ballistic anti-ship missiles, so far ground-based.

But the sailors on the "treasure islands" are just a human shield, but what about swords? But this role is supposed to be assigned to the B-52 bombers deployed in Australia. The venerable age of Vietnam veterans should not be misleading: in the near future they are planned to be armed with a promising cruise missile with a nuclear warhead AGM-181 and a hypersonic missile AGM-183. For launches, they will not need to enter the Chinese air defense coverage area, and a huge supply of fuel will allow the "fifty-second" to hang in the air for hours and days, if necessary.

Do not forget about the political aspect. As is known, missile-carrying bombers have long ceased to be the main carriers of nuclear weapons: for obvious reasons, this role in nuclear triads has passed to land-based and / or sea-based ballistic missiles. However, neither submarines, let alone ground-based systems, are suitable for "flag display" - unlike bombers.

After the military activation of China and North Korea caused by the “Pelosi flight”, the American “allies” in the region began to feel slight discomfort, a kind of “substitute complex”. Americans, willy-nilly, have to make their presence known in order to prevent further decline in prestige.

Red Star against the imperialist coalition

The main weak point in the American concept of the military inoculation of China is that the latter is still a nuclear power, and not just any, but the third in the world. Accordingly, the expectation that the PRC will not risk a nuclear escalation in the face of a strategic defeat is rather unsteady.

This, by the way, gives rise to speculation: is the Australian bridgehead a kind of “nuclear safety valve”, a decoy duck on which China could deliver a couple of “precautionary” strikes? Unlike Ukraine, which is literally in the middle between several owners of nuclear weapons, which makes “limited escalation” a priori impossible, in the Pacific there is where to roam with “moderate” risk. Will the Americans pity the "brotherly" Australians? Perhaps a little more than "brotherly" Ukrainians, but only a little more.

And the case is just the one when the "game" can pay for the "candles". It is not for nothing that China is named the main adversary in the new military doctrine of the United States: there is a high probability that already in the medium term (approximately by 2050) China will overtake the United States not only economically, but also technologically.

While the entire current global crisis has been set in motion by the US as a means of siphoning industrial and scientific capacities from Europe and (partially) Asia to America, the process is not going quite as planned. More precisely, although European industry is leaving its native land, it is heading not so much to the United States as to China itself: there are more and more publications about large investment projects of German magnates in China. Despite the huge amount of money allocated, the prospects for turning the United States into a world leader in the microelectronics industry are also doubtful - this was stated in a recent publication not by anyone, but by the owner of the Taiwanese microchip manufacturer TSMC Chang.

In the West, there is a deep crisis of both scientific potential and, in general, human capital: two decades of degradation of education, centralized drug addiction of the population and the imposition of a gender agenda are making themselves felt. Recently, Chinese scientists have outpaced American scientists in the number of scientific papers cited, while the United States is experiencing a serious decline in "brain gain" from abroad.

In general, in a long-distance race, the Americans clearly shine less than the Chinese. It's funny that this is largely the result of their own policy USA in the post-Soviet period. And, in order to interrupt this result, the Americans may well try to "tip the table."

Whether they decide to take radical steps or not depends ultimately on the domestic political situation. Such tension has been reached between the Democratic and Republican factions of the American elite that whoever wins the next congressional elections and the presidential elections in 2024 will be talking about a hard curtailment of “democracy” and the establishment of a totalitarian police dictatorship.

Of course, this process can also turn into an open civil war - and then the rest of the world will breathe a sigh of relief. But if one of the parties (it doesn’t matter, “demos” or “spawns”) seizes absolute power right away, then its hands will be free to unleash aggressive wars around the globe, and the Asia-Pacific region risks becoming the first and most important theater of operations.
Reporterin Yandex News
Reporterin Yandex Zen
9 comments
Information
Dear reader, to leave comments on the publication, you must sign in.