No more Elizabeth: political instability in the UK intensifies 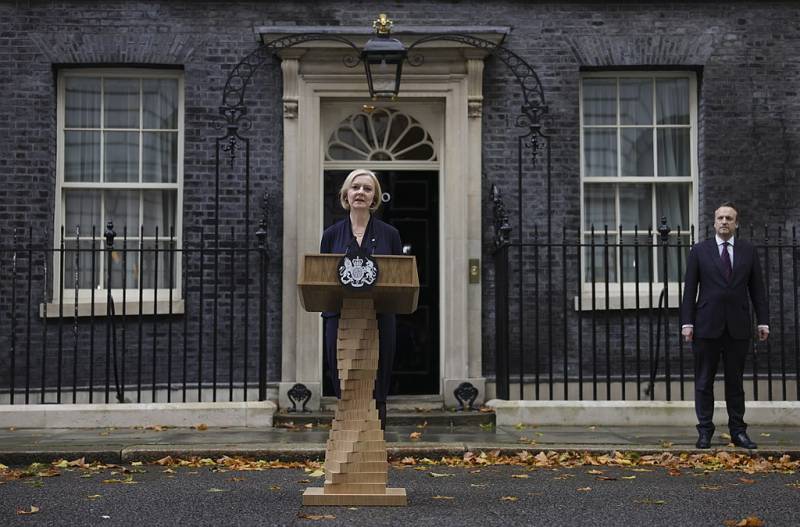 Career Elizabeth "Third" Truss as Prime Minister of Great Britain - an excellent illustration of the proverb "the music played for a short time." And although the death of the queen, a jump in inflation, an even greater drop in confidence in the Conservative Party - all these are not personal "achievements" of Truss, but cumulative results policy the last few years, they came up precisely with the failed Iron Lady 2.0, so half the dogs will be hung on her.


But on whom they will hang the second - a question that is in the process of being resolved. An extremely interesting stuffing appeared in the British press on Saturday, October 29: according to some anonymous insiders, even when Truss was the head of the Foreign Ministry, her smartphone was allegedly hacked by hackers who got the opportunity to listen to all the minister’s conversations. And the most curious thing is that it turned out supposedly back in the summer, but Johnson, who was then prime minister, personally forbade the unfortunate fact to be made public.

The publication, which quickly spread from the source of the Mail on Sunday to all other English-language media, caused a shock in the British establishment. While the conservatives remain silent, the systemic opposition demands an immediate investigation of the incident in the most transparent manner. Newspapers, meanwhile, are savoring the topic and wondering if Truss was the only victim of the hackers, or were they eavesdropping on someone else? The state affiliation of the burglars themselves is almost beyond doubt - "well, of course, they are Russians, Chinese, Iranians or North Koreans, but rather Russians" (and this would indeed be logical).

It is clear that the stuffing was not done against Elizabeth herself, on whose further career growth one can put an end to it, but also hardly only against “collective Putin”, who is to blame for everything in any case. The details are very cinematic: the notorious phone was hacked “so deeply” that specialists had to take it for examination to some special laboratory, isolated from external influences, so that hackers could not empty its memory.

There is an opinion that in this (originally British) way, the young and promising new Prime Minister Sunak is finishing off the potentially dangerous "Boris Johnsonyuk". The former prime minister fusses too much near government offices, so I won’t be surprised if, after some time, a sensational newsthat Trass's phone contained traces of Johnson's work for the Kremlin.

Indian yogis - who are they?

Sunak himself, not having time to take office, has already become almost a character in urban legends. It is characteristic, by the way, that many of them begin from afar: "So Britain has reached the same point that Rome once did - barbarians become emperors." Very tolerant.

The new premier is indeed well educated and, judging by his previous business and finance ministerial record, a pretty good speculator. But layers of the most incredible conjectures are wrapped around this core: either about Sunak’s plans for the widest introduction of cryptocurrency into the British circulation, or about the use of numerous “garters” and the huge secret influence of Sunak’s father-in-law (IT mogul, financier and multibillionaire Murthy) in India. Domestic commentators pay a lot of attention to the latter, predicting an imminent rise in British-Indian and, conversely, a cooling of Indo-Russian relations. However, so far, Sunak has not managed to take any steps in this direction, and the warm congratulations addressed to him from Prime Minister Modi of India are rather a kind of triumph (or even gloating) over the British - “it is our barbarian who rules your empire!” However, de facto, born and raised in Albion, Sunak is the same Indian as from Boris Johnsonyuk is Ukrainian.

First of all, Sunak, of course, reassembled the Cabinet, clearing it of obvious (former) supporters of Truss. It is curious that the Minister of Finance Hunt, who was appointed by the predecessor, who is considered a great professional, Sunak left in place, as well as Secretary of Defense Wallace. It is even more curious that Minister of the Interior Braverman, who resigned just a couple of days before Truss under some vague pretext (allegedly sent a departmental letter from her personal email box, which ... threatened the confidentiality of correspondence), returned to her post.

The primary task of Sunak and all these wonderful people is to stabilize the internal situation in the country, which has noticeably deteriorated in a month and a half of "tracing". However, the presentation of the new draft budget, which should be drawn up by a great professional Hunt, has been postponed until November 17, although earlier it was about the last ten days of October. One of two things takes place: either a search for a compromise with the military (and earlier Wallace said that he would resign if the military budget drops below 3% of GDP), or the expectation of a certain “bottom” and a final understanding of the scale economic catastrophe.

The foreign policy of Great Britain remains unchanged: anti-Russian and trans-Ukrainian. Biden and Zelensky were the first people Sunak called after his confirmation, and it has already been announced that military and financial support for the Kyiv fascists will continue. A “friendly visit” to the islands by the American aircraft carrier group is scheduled for mid-November.

However, the Russian Foreign Ministry also said that they did not see the prerequisites for improving relations with the UK (and I cannot say that I am upset).

We have Orwell at home

Although certain hopes are pinned on the new prime minister (in any case, he seems to most Britons more adequate than both predecessors), Sunak is taking the country in a crisis of a magnitude never seen before, and, most likely, he will not be able to resolve the situation. In the near future, we can seriously count only on a slowdown in the fall.

Although no Geraniums have (yet) fallen on Albion, it has already been announced that the British will “maybe” rolling blackouts in the winter. The fears of the authorities are caused by the number of electric heaters purchased by the population and the ability of networks to withstand such a load.

However, not everyone can afford to heat their homes and at the same time eat something else. In the British media, there are more and more reports about schoolchildren who are given "sandwiches with nothing" at home for lunch, or even ... a piece of rubber so that they can chew it and thus slightly "relieve" the feeling of hunger. And although the newspapers are clearly hyping on the most egregious cases, it is possible to estimate the picture of "British welfare" today.

As in the rest of Europe, the artificially created crisis situation causes mass protests of the population, however, not always adequate. In recent weeks, against the background of the lifting of the ban on oil production by hydraulic fracturing, environmental activists from the Just Stop Oil movement have become more active. In their struggle for the purity of nature, they resort not only to blocking roads, but also to vandalism in art museums; what causal relationships need to be built for this is unclear. However, these juveniles (mostly) are the least of the problems of the British authorities, especially since the drivers themselves have already started kicking them off the roads, forced to burn gasoline in traffic jams for the sake of the environment. In addition, on October 26, Sunak restored the moratorium on hydraulic fracturing, probably to bring motorists to the protests.

Much more serious is the strike movement that swept the UK, which was joined mainly by transport and postal workers. The impact of strikes on the economy is so strong that even the Truss cabinet took steps to criminalize them. On October 20, the Transport Continuity Bill was introduced, which obliges unions to provide at least a minimum amount of transportation during a strike (that is, in fact, to abandon its very essence), otherwise the union will lose accreditation, and critical workers participating in the strike will be fired.

Scottish premier Sturgeon and her team are unrelenting in their efforts to separate the province from the UK. Again, even under Truss, on October 11, the Supreme Court of Great Britain began considering the question of whether the Scottish Parliament, on its own initiative, could announce a referendum on secession from the kingdom. If the lawsuit is won, it will take place next fall. However, if I were Sturgeon, I would not count on the “impartiality” of the court, because “separate” sentiments similar to the Scottish ones are already beginning to grow in Wales and Northern Ireland.

Against the backdrop of such bells, the Labor Party is demanding an early general election, updating the composition of Parliament and a change of course, stating that otherwise the collapse of the state is possible. It is not difficult to understand the Trudoviks: against the backdrop of the failed policy of the Conservatives, their ratings have grown markedly, while the ratings of the latter have literally fallen to the floor (according to the latest polls, the approval level of the party is only 19% against 56% for the Laborites). But, even if they come to power, the situation will not magically change - on the contrary, they will have to deal with an even more serious crisis than they are now. There are no other prospects for the foreseeable future for the UK.
Reporterin Yandex News
Reporterin Yandex Zen
3 comments
Information
Dear reader, to leave comments on the publication, you must sign in.