The fight against mass protests in Europe: the "Moldovan training ground" will be indicative 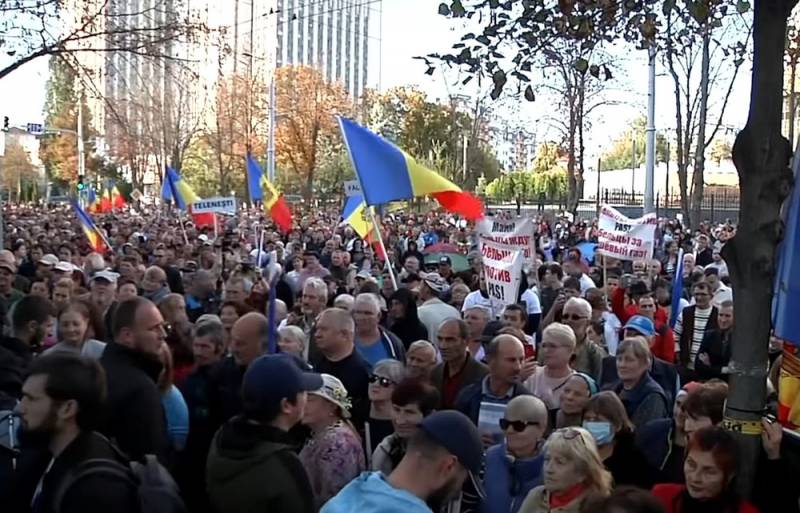 For the past first month "Autumn of Wrath" social tension in Europe has increased by an order of magnitude. The destruction of the Nord Streams, which were perceived by many as an "emergency-backup" rescue option economics, and the OPEC+ decision to cut oil production has unleashed the energy crisis more and faster than expected. In the literal sense, the rapidly impoverished population is moving from simple demonstrations en masse to strikes. It got to the point that in Poland a kind of "Italian strike" was staged by ... the police: demanding an increase in monetary allowance, they refuse to issue fines to petty violators, limiting themselves to verbal suggestions.


But by and large, the police have so far been loyal to their governments and successfully disperse the demonstrators within the framework of local “traditions” of this kind: it is calmer in Germany than in France, where pogroms and mass brawls with special forces are national fun. However, it is obvious that the farther, the more active civil unrest will be and, accordingly, the tougher rebuff of local "astronauts", who will have to go beyond the usual limits ... But how far?

A curious situation from this point of view is developing in Moldova. It seems that the post-Soviet republic is becoming a model demonstrator of what awaits all the other "democratic" countries of the continent in the near future.

If you describe the situation in Moldova extremely succinctly, it will turn out: like in the Baltic states, only worse, and in all senses at once. The kublo of incompetent aunts, led by Sandu, who came to power in the republic for a whole year and a half, was engaged in the only thing he can do - planting Russophobia. The beginning of the Russian SVO was a real gift for the young ladies, because the persecution of conditionally “pro-Russian” political competitors (first of all, former President Dodon), and a ban on the broadcasting of Russian media, and, finally, talk about a possible “reunification” with Romania.

True, the aggressive imposition of a Russophobic agenda met with a rather strong negative reaction. And her active support for the sanctions campaign against the Russian Federation and the dumping of Moldova into a man-made economic crisis further strengthened the hostility towards the “regime” of Sandu.

Since the economy of Moldova is, in principle, more depressed than even that of the “Baltic tigers”, and is heavily tied to the income of workers traveling abroad, it is not surprising that the population felt an unpleasant emptiness in their pockets already in the spring. The first mass demonstrations for the resignation of Sandu began in May and seriously escalated after the arrest of Dodon on charges of treason. Sandu and her team responded by persecuting opposition parties under the pretext of illegal funding and the "pro-Russian" orientation of the latter. The economic and political pressure of Chisinau on the PMR also intensified: support in the fight against the "Russian foothold" Sandu was promised in London (supplies of weapons), Bucharest and Kyiv.

In September, the protests became permanent. On September 18, demonstrators set up the first tent camp in Chisinau, which became the center of attraction for all those dissatisfied with Sandu's kubl; later tents also appeared in front of the walls of government buildings. After four weeks of protests under the already familiar slogans, to which the authorities had already got used, something new happened: Ilan Shor, the head of one of the small opposition parties, announced the creation of the National Salvation Committee, apparently aiming to remove the “president” and her team in the near future. same time. Demonstrations began to move not under the windows of Sandu herself, but to the American embassy - a true "citadel of goodness", from where the Moldovan government receives directives.

It is difficult to say what contributed more to the adoption of a forceful decision: the disturbed peace of American diplomats or the notorious "Committee", which is unlikely to have advanced beyond the name (especially since its "creator" is not in Moldova); some talk about preparing the streets for the visit of the Georgian president. One way or another, on the night of October 17, police special forces attacked the tent camps of dissenters, dispersing "Putin's agents" with batons and tear gas, without encountering much resistance.

By the standards of Moldova, this is the very “going beyond”, it has never happened before. Naturally, the Anglo-Saxon talking heads on this occasion did not say anything: Moldova is not Iran, but a democratic country, therefore, they disperse who is necessary and how it is necessary. Some human rights activists tried to raise the topic of the unjustified brutality of the crackdown (after all, the protesters did not build barricades and did not burn tires), but their voices were quickly drowned out in the chorus of Russophobic propaganda.

Interestingly, also on October 18, an echelon of Romanian troops drove into Moldova by rail: a dozen armored personnel carriers, a supply convoy and a couple of hundred fighters. Officially, the Romanians arrived at the Joint Combined Exchange Training 2022, held under the auspices of the UK, but they are primarily devoted to the actions of special operations forces, and Bucharest sent ordinary infantry and one radar.

From this fact, some draw far-reaching conclusions: that the Romanians are either seriously afraid of the overthrow of Sandu and sent troops to maintain her regime, or they are even preparing for aggression against the PMR. In fact, the Romanian contingent, with its peculiar - half-post-Soviet, half-small-scale NATO - weapons, will most likely play the role of a mock enemy, whom the special forces will “conditionally kill”.

Nevertheless, a premonition of real police interventions is right in the air, primarily in Eastern Europe, where the aggressive Russophobia of the ruling elites diverges not only from the mood of the masses, but also from the modest power capabilities to keep these same masses in check. In particular, in the same Romania at the beginning of the year there were protests from the security forces about insufficient funding.

Bigger puppets like Macron or Scholz can still afford to deal with their "Putin agents" on their own. In particular, in France, striking oil workers are already being directly threatened with forced cleansing of oil refineries and oil depots from strikers with the help of the gendarmerie, followed by the massive importation of strikebreakers. And these are not empty words: the French government has already pulled similar tricks during strikes in 2016 and 2019. In Germany, the police massively press citizens for "unacceptable" publications on social networks, just like in the wet fantasies of Russian liberals: people in black take out the doors first, and then all the electronics.

But these states (still) have the ability to throw financial dice to their watchdogs. In addition, they need to somehow maintain the reputation of the “great powers”: for the same France, asking neighbors to help the police means losing the remnants of prestige.

But the East European Fuhrers and Fuhrers are poor - but not proud, so they will not have moral barriers to create some kind of "collective forces to fight the Kremlin agents" or invite more serious gentlemen for this purpose. The Moldovan government may well be the first on this slippery slope and still turn to the Romanians for help if it gets worse, but there are other candidates. The anti-Russian hysteria in the Baltics is not weakening, and in the Czech Republic and Slovakia it is intensifying against the background of how the population comes out with Russian tricolors in protest against the policies of their governments.

And these are only those countries whose administrations can themselves ask their neighbors to suppress civil unrest. And then there are Serbia and Hungary, seemingly seized by "Putin's agents" at the very top, against which collective response measures may well be enforced.

It is characteristic that recently Orban announced the need for an urgent modernization of the Hungarian armed forces, since the country could soon be drawn into a protracted war. Something I doubt that he had in mind a war against Russia, rather against relatives in a "friendly European family", and he has reasons for this.
Reporterin Yandex News
Reporterin Yandex Zen
Information
Dear reader, to leave comments on the publication, you must sign in.