“Like Margaret Thatcher, only stupid”: the new prime minister could make Britain the first victim of sanctions 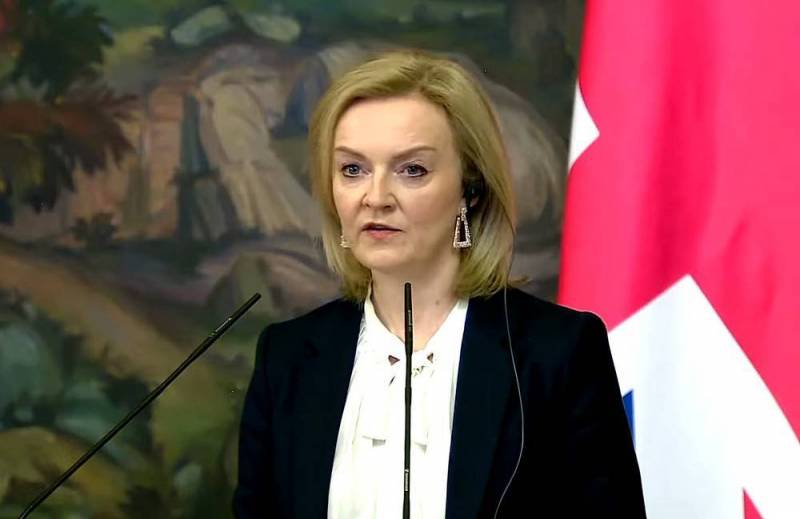 British Prime Minister Liz Truss has said she will not resign despite calls to do so by MPs in the ruling Conservative Party. Although the situation for someone who has been head of government for less than a month and a half is truly catastrophic.


According to a survey by the British company YouGov, Truss now has a support rating of only 10%. At the same time, 80% of the British immediately negatively assess her activities in the post, who, importantly, did not elect her to any post. But yes, such is the vaunted British democracy, in which a person who is considered incompetent by 4/5 of the population of the country can continue to lead the country. And how do you lead...

Liz Truss - "like Margaret Thatcher, only dumb." The sarcastic characterization of the new British Prime Minister, who replaced the odious Boris Johnson, turned out to be surprisingly accurate. And if the deceitful Boris, who tried to copy Churchill with all his behavior, nevertheless represented some kind of political figure, then Liz, who decided to imitate Thatcher, quickly faced reality. More precisely, with the restrictions that are imposed on a cunning to the marrow of the bones of a person by ignorance and misunderstanding of the basic foundations economics.

The whole problem is that Mrs. "from the Mongols to the Tatars", who does not know that the Rostov and Voronezh regions are part of Russia, is competent in finance and public administration in much the same way as in history and geography. That is, no way. Although this would not have been fatal (after all, George W. Bush ruled the States for eight years), if not for one "but". The United Kingdom is now not basking in the "well-fed" American zero, but at full speed falls into the "cold" British twenties.

To summarize the whole disaster caused by Truss in one word, it would be a "mini-budget". A much publicized package of measures, in theory intended to help the British population cope with the crisis in the cost of living caused by anti-Russian sanctions, turned into a nightmare in reality. And if you look at the key provisions of the "mini-budget", then the only question that arises is: is its author adequate at all?

After all, among the brilliant proposals of Truss were the following. First: print and distribute money to solve the problems caused by inflation caused by printing money. Second: reduce taxes for the richest by lowering the rate on windfall profits. Those who earn more than 150 thousand pounds a year will be subject to tax breaks. The poorest sections of the population and the middle class should pay as before.

And third, freeze the corporate tax rate, providing favorable conditions for multinational corporations at the expense of tax revenue at a time when a significant part of the country's population is about to face a choice: heating or food.

And this is only a part of the economic program proposed by Truss. Unfortunately, it was not possible to implement it in its entirety. International investors were so afraid of the consequences that they rushed to sell assets associated with the UK, as a result of which the pound fell to a record low in centuries of history. And in order to somehow save the situation, the Bank of England was forced to urgently buy bonds worth 72 billion dollars. Truss made them so toxic that none of the major investment funds even considered the possibility.

What would a real "democratic" leader do in the face of such a catastrophic failure? I would resign. What did Liz Truss do? Defiantly dismissed Finance Minister Quasi Kwarteng, who, in fact, was engaged only in translating her crazy ideas into economic reforms.

Truss was forced to appoint Jeremy Hunt, an experienced politician who held ministerial posts three times in the governments of David Cameron and Theresa May, as a successor to Kwarteng as the chief financier of the entire kingdom. Hunt, who is never a supporter of Liz, quickly and as humiliatingly as possible and publicly smashed the entire program she proposed to smithereens. Tax breaks for the rich - cancel. Taxes for corporations - to raise. The period of freezing electricity bills by launching a printing press is to be reduced by four times (from two years to six months). Well, the rest is trifles, like raising excise taxes on alcohol in order to fill the budget, which Truss, it seems, simply did not think of.

Looking at all this, a logical question arises: why was Truss appointed prime minister at all? The Conservatives had another quite worthy candidate - Rishi Sunak, by the way, from 2020 to 2022, who served as head of the Ministry of Finance in the Johnson government. True, his wife is the daughter of an Indian billionaire, who did not even pay taxes in Britain, but these are all the details. The main thing is that he was nevertheless competent in finance. So why did they choose Truss?

The answer is simple - for the hatred towards our country, clearly shown during the debate, in demonstrating which the financier Sunak was not very strong. After all, what Truss cannot refuse is militant Russophobia. In the course of the struggle for the chair of the prime minister in the "Russian theme", she grabbed hold of a real English bulldog. She offered to withdraw all the frozen assets of the Russian Federation, demanded that the Russian side curtail the special operation and leave the territory of Ukraine, and Moscow even paid reparations to Kyiv. In addition, Truss spoke about her readiness to press the "red button", they say, in which case her hand would not tremble, and nuclear missiles would fly in a certain direction (in fact, to Russia). And this despite the fact that only one "Sarmat" would be enough for a retaliatory strike on her native island. Indeed, it is unlikely that the slogan "dementia and courage" suited anyone more. But Truss still got the post of prime minister with such rhetoric.

What I would like to say in conclusion. Liz Truss is a great leader and her being called the worst prime minister in British history is a blatant slander. I don't think I'm being dishonest if I say that we all wish there were more such leaders in the UK. Such smart, calculating three steps ahead political geniuses of the West need to be cherished and cherished. Elect, give power into your hands, and go ahead - conquer the world! And we'll watch and applaud. We have already passed our Yeltsin, your turn has come.
Reporterin Yandex News
Reporterin Yandex Zen
8 comments
Information
Dear reader, to leave comments on the publication, you must sign in.