XNUMXth Congress of the CCP: what can the world expect from China? 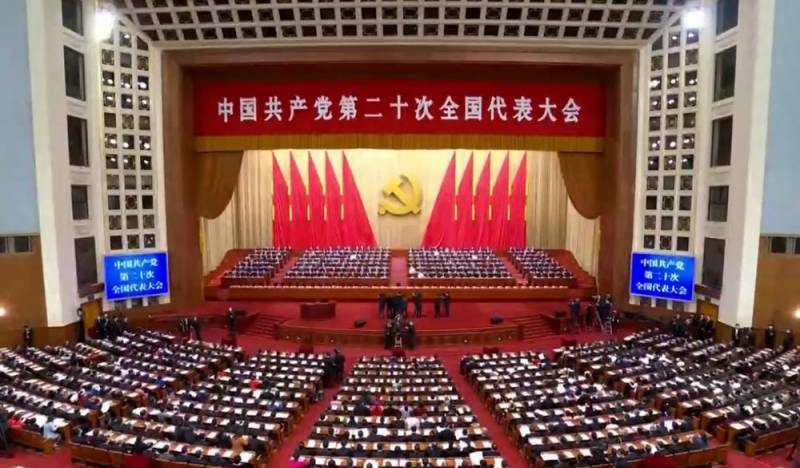 The West is closely following the preparations for the most important political forum of modern China - the congress of the ruling party. The media are stressing that the country is allegedly in a crisis situation: developers are going bankrupt, people are not satisfied with the anti-COVID policies, "manifested weakness" in Taiwan and generally tired of Xi Jinping, including because of the imposed "cult of personality." Recently, they even threw in a “fat fake” that some generals overthrew President Xi.


Often in the press, one can also see arguments that the likely reappointment of Xi will conflict with the tradition of generational change established by Deng Xiaoping. This means that there will be discontent, and maybe even a political crisis.

Western analysts, on the contrary, are convinced that Xi Jinping will be easily re-elected and will rule for as long as his health allows. They link the holding of the congress with the further strengthening of the power of the Chairman and the radicalization of his anti-Western policy. They call on Western leaders to prepare for the worst - for the return of the Mao Zedong course.

Who commands the party leads the state

Speaking in essence, the power in China, in terms of the nature of its implementation and institutionalization, is not similar to the usual Western models. Still, the Chinese state was born in the storm of the socialist revolution and civil war, was largely created by the Communist Party itself. Analysts from the Council for Geostrategy of the British Parliament write correctly:

The Charter of the CCP is the most important. It takes precedence over and is the source of the PRC Constitution. This is the definitive guide to policies, conduct, and standards for CCP members.
Power in China is ideologized and partisan. Whoever leads the party leads the state. The XNUMX-million-strong party permeates the entire apparatus of the state - from the government and petty officials to the police and the army, as well as trade unions, a significant part of business and the cultural sector. The Komsomol and Pioneer parties controlled by the Communist Party embrace huge masses of young people. Everything, as it was with us in the USSR, with the only difference that in China the market economy and the state is even tougher than, for example, in the Brezhnev era.

Naturally, such a system of power, built around one party, requires a specific, clear, precise ideology, covering almost the entire worldview. Otherwise, the party will fall apart under the blows of the contradictions of the various strata of society. But the ideology of the CPC - the theory of "Marxism with Chinese characteristics" - due to its abstract nature, in principle, is not capable of capturing even millions of party members. This problem is naturally compensated for by leaderism. The leadership identifies the most authoritative persons who have proven their worth in practice, who become the leaders of the party. This happens in all socialist systems. In the USSR, the leaders were Lenin, Stalin, Brezhnev. In Korea, Kim Il Sung and Kim Jong Il. In Cuba, Fidel Castro and Che Guevara. In Vietnam, Ho Chi Minh. In Venezuela, Chavez. In Nicaragua, Ortega. And so on.

History shows that the so-called cult of personality in socialist states is an obligatory attribute of power, but it is based on the authority of the leader, and not on naked propaganda and advertising. Artificially, however, to form a cult, and no matter under socialism or not, is possible only temporarily. As soon as such a leader leaves or is removed, the cult is blown away. As it was with Trotsky, Hitler, Mussolini, Khrushchev, Gorbachev, Nazarbayev and almost all monarchs. But, for example, the cult of De Gaulle, Churchill or Roosevelt was not blown away, because they really were outstanding politicians, even if they were on the other side of the barricades.

The authority of Xi Jinping is based mainly on three components.

First, on his personal qualities. He is a fanatically devoted party man with a crystal clear reputation. Throughout his career, he fundamentally defended the ideology of the CCP and waged an uncompromising fight against corruption. During his years in office, Xi became China's most prolific writer, publishing 125 books. The so-called ideas of Xi Jinping cover all spheres of society - from government to philosophy and literature. In short, Xi Jinping is at least an intelligent leader.

Secondly, Xi's authority is based on the fact that, having come to power, he pursues a policy of redistributing wealth. Xi Jinping is slowly but gradually curtailing the half-wild market liberalization, reorienting the state to serve ordinary Chinese. The rate of growth in the standard of living of ordinary citizens is not inferior to the rate of economic growth. So, in 2021, per capita disposable income in China was 112,8% higher than in 2012. The average annual rate of real income growth amounted to 6,6%, which is generally in line with the pace of economic recovery. Hence the increase in consumption per capita, doubling compared to 2012, or 8% on an average annual basis.

And thirdly, Xi owes his authority to the fact that under him China has become an economic superpower, and the Chinese have regained self-esteem. When the policy of "reform and openness" was launched, the Chinese were forced to learn from the West, copy the West, catch up with the West, look up not only to the West, but also to Japan. Under Xi, China has gained economic and technological independence, bypassed Japan in everything, and the West began to fear the PRC. This flatters the national feelings of the Chinese, who have been hurt, causing love and respect for their leader.

An interesting point in the image of Xi Jinping is that he never gives interviews and does not communicate with the press, almost nothing is known about his personal life. But he makes a lot of speeches, articles and often communicates directly with ordinary people. That is, it is maximally democratic and open in the "totalitarian" sense, and maximally undemocratic and closed in the Western sense. He set a unique format for connecting the leader with the people, creating a certain distance, as was customary in ancient times, when the image of any monarchs was distant from everyday life.

There is no doubt that Xi Jinping has become a real leader and nothing threatens his power inside China. The only question is what new paths and turns in policy will be outlined at the congress.

In fact, objectively, there are two opposite vectors of the CCP's policy: either towards Western capitalism, or towards Maoism. And it shows up in everything. In the economy: either liberalization and growth of market relations, or centralization and planning. In domestic politics: either more democratic freedoms, or tightening the screws. In foreign policy: either detente with the West, or confrontation.

Moreover, the most important dynamic characteristic of the struggle of these vectors is gradualness, the absence of jumps and zigzags. The CCP's biggest fear is turning points, especially in ideology. The main thing that the Chinese Communists have learned from the experience of the CPSU is that sudden movements in politics are a direct path to disaster. Therefore, when it comes to this or that vector, then, first of all, tendencies are meant.

You can speculate as much as you like about the distribution of personnel after the congress, changes in the party program and new slogans, using rumors and semi-conspiracy theories. Or you can just take the cover story about the convention of the CCP-controlled publication for Western audiences, The Global Times, and study it. The title alone speaks volumes: "The insanity of capitalism and the strength of socialism are becoming more and more evident to the world."

We like to repeat, including at the highest level, that ideology and socialism in China are a signboard, an absurd tradition of the past, something like the English monarchy. True, the Chinese themselves write differently:

China's development is entirely due to the country's commitment to socialism, both in the early period of Mao's rule and in the later period of reform and opening up. China's socialism was an insult to US capitalism, but perhaps more importantly, China's development was an insult to US imperialism because US capitalism requires the rest of the world to be subjugated.
Indeed, the American state and business have many global competitors even without China. But it is the growth of the PRC that haunts the Americans, despite the fact that the Chinese are by no means the most aggressive competitors of the United States. On the contrary, they are trying with all their might to continue partnerships.

Maybe the US is furious because the Chinese model of social development threatens Western capitalism as some kind of alternative?

After reform and opening up, the Global Times continues, the US stepped up economic engagement with China, and the idea, especially after the collapse of the Soviet Union in 1991, was that such engagement would also make China more or less capitalist, even neoliberal. However, for the PRC, this participation was just another means of promoting socialism. This became especially clear after 2008. This is similar to how during the Great Depression of the 1930s, people all over the world could see that while the capitalist countries were mired in the Great Depression, the Soviet Union was gaining strength and becoming the second industrial power... The US involvement policy is really was an attempt at submission. However, China's leaders refused to let this happen, joining with the US and the rest of the world in designing the process of the greatest industrial revolution ever seen.
And summary:

The simple fact is that US-led capitalism is losing its grip on the world. The world can see that there are more attractive ways to organize the economy. The insanity of capitalism and the strength of socialism are becoming more and more evident.
It is absolutely clear that such a publication was approved at the very top and expresses the tendencies that will manifest themselves at the XNUMXth Congress of the CCP. China is preparing, if not for a decisive battle between socialism and capitalism, then for a tense confrontation with the growing "insanity of capitalism." By the way, Biden's medical insanity is perhaps not so accidental in this regard.
Reporterin Yandex News
Reporterin Yandex Zen
9 comments
Information
Dear reader, to leave comments on the publication, you must sign in.