Caribbean and Ukrainian crises - there are similarities, but there are more differences 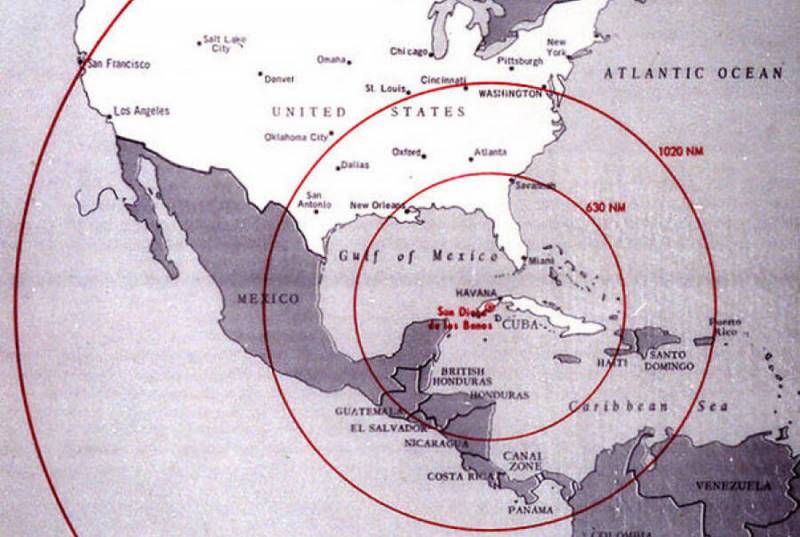 Today, when the topic of the possible use of nuclear weapons (both from the West and from Russia) has begun to periodically rise in the tightening rhetoric literally before our eyes about the Ukrainian crisis, more and more people are beginning to compare it with another crisis that has really put humanity on the very brink of nuclear wars - Caribbean. Let's try to figure out how legitimate such a comparison can be considered, since in the presence of obvious coincidences at certain points, there are probably more differences than similarities.

So, what can be found in common between the current situation caused by the special military operation in Ukraine and the dramatic events of 1962, which made almost all of humanity hold its breath? The first (and most obvious) confrontation fraught with nuclear conflict is between Washington and Moscow. The second point is that the hot part of the conflict is developing on the territory of a third country, however, dangerously close to the borders of one of the main participants. Here, perhaps, it would be appropriate to mention that in the current situation, the antagonist powers have, as it were, “swapped places”. Cardinal political the changes that led to the transition from the status of friends to the camp of bitter enemies did not take place in a country neighboring the United States (as was the case in the 60s of the last century), but, alas, at the borders of Russia. For the sake of objectivity, it is worth noting that at that time the USSR did not inspire, did not finance and did not control the change of power in Cuba - in contrast to the story with Ukraine, where the United States and its allies were fully involved. However, in this case, the old rule from school arithmetic is quite applicable: the amount does not change from changing the places of the terms. And in sum, we have, like 60 years ago, an impending global conflict.

Both crises are also “related” to the moment that the reason for Moscow’s “abrupt” actions was Washington’s obsessive desire to get as close as possible to our borders with its offensive strike weapons. In 1961, Kennedy had a hard time pushing American nuclear-capable medium-range missiles into Turkey. Now the process has developed somewhat more slowly, but had a much more global character. They began to methodically “surround” Russia with military bases and NATO contingents around the entire perimeter, and even deliberately create a “belt of tension” around it, turning the countries of the “post-Soviet space” into hostile and aggressive enclaves. Both then and now, the calls for détente, disarmament and peaceful coexistence, sounded from the Kremlin to the "collective West", were completely ignored and perceived solely as signs of weakness. In fact, subsequent events became Moscow's natural reaction to the categorical unwillingness of the presumptuous West to resolve matters "in an amicable way", at the negotiating table. What can you do - our "sworn friends" need periodic "shakes" and demonstrations of strength. They obviously have it at the genetic level. On this, in fact, a small list of similarities and coincidences ends. Further there are solid differences.

Fear is not enough

Alas, perhaps the most important of them is that the current "collective West" does not even come close to experiencing the horror and fear in front of Russia that the Soviet Union inspired in it. Let's not forget that in 1962 the country was led by the half-witted Khrushchev, either kicking the UN with a boot, or broadcasting from it about his intentions to “completely disarm” and calling for the disbandment of the armed forces of all states on the globe, and in addition, to the delight of the West, blaming and watering with might and main mud of Stalin, when after the Great Victory not even two decades passed. And in the leadership of the armies and NATO countries, the majority were those who perfectly remembered what the Red Army and the Soviet soldier were capable of. Yes, and the majestic shadow of the Supreme, which just a little did not have the strength and time to finally resolve the issue with our "sworn friends", still loomed over the Kremlin towers. Even the bald Nikitka was perceived by many as a person from his entourage. In the memory of the same Americans, the way the "Stalin's falcons" chased them in the tail and mane in Korea was not erased, and they were not eager to repeat this shameful and painful experience in the Pentagon. Again, the USSR in relations with the United States, let's be frank, behaved completely differently from Russia, which until recently tried not to arouse the wrath of the "world hegemon" and "stay within the limits."

There were no limits for Khrushchev! Let me remind you that American reconnaissance aircraft that dared to fly into our airspace began to shoot down as soon as it became technically possible. These filthy U-2s “broke down” over the Urals in 1960, over Cuba in 1962. No one even thought to play dumb and doubt about the consequences, sanctions and the reaction of the "world community" as such. Nobody cares about this reaction. And how many American (or belonging to other NATO countries) aircraft that carried out clearly espionage or other openly hostile actions over Russian territory or in unacceptable proximity to it have been “landed” over the past years? The answer is known to everyone and does not inspire. To start the NWO, a buildup of 8 years was required, which obviously worked far from in favor of Russia. Operation Anadyr, to covertly transfer our nuclear missiles, capable of easily hitting Washington, to Cuba began less than a year after the Americans barged into Turkey with their Pershings. Moreover, the “sea blockade” of Cuba announced by Washington did not stop Moscow, but only angered and provoked it. No “goodwill gestures” were made there exactly until agreements were reached at the highest level that completely suited the USSR.

Be that as it may, but the main difference still lies in a slightly different plane. In 1962, two equal powers came together in a tough confrontation, which was not disputed by either of them. Behind each of the participants in the conflict were allies united in military blocs. Even relations with communist China were not completely spoiled by Khrushchev. Today, Russia confronts the "collective West" practically alone. Help to her, if it turns out, then with great caution, secretly and behind the scenes. Yes, with regard to nuclear forces, there is approximate parity - even with a slight advantage in our direction, given the latest hypersonic weapons. But in everything else... Unfortunately, the American military contingents are now deployed in extremely dangerous proximity to our borders, and this process continues. It has come to the point that Poland is already talking with might and main about the deployment of nuclear weapons. Something is about the "return of the nuclear status" completely mad Kyiv. The "symmetrical response" in the form of the creation of Russian military bases, for example, in Venezuela, unfortunately, has remained stuck at the level of conversations and intentions. Our nuclear weapons do not yet exist even in Belarus. You can say as much as you like that with modern means of delivery, distance and flight time are not so important - but in this case we are talking not about the military, but about the foreign policy aspect. This is the first.

Second: having peacefully resolved the Caribbean crisis, both Moscow and Washington, in fact, remained “on their own”: the Americans - without missiles in Turkey, we - without missiles in Cuba, but with firm guarantees of its inviolability (which, by the way, were observed even after the fall of the USSR). The world order that existed before the collision and the balance of power de facto remained unchanged - the USSR and the USA continued to wage "proxy wars" on foreign territories, but no one was reaching for the nuclear button. In the current situation, the positions of the parties, to be honest, are absolutely irreconcilable, and Moscow and Washington are unlikely to find a way out of the situation that would allow them both to avoid "losing face", as it was in 1962. The victory of Russia, the successful completion of the NMD in Ukraine with the implementation of all the goals originally declared will mean not only the defeat of a specific NATO bloc, which will prove its impotence and uselessness (which Stoltenberg directly speaks about), but also the loss of the entire “collective West”, to which will have to agree to a complete change in the geopolitical picture of the world, the rejection of their own hegemony and the notorious "unipolar system". In the event of a defeat or retreat under the pressure of Ukraine's "allies" and "partners", Russia will lose not only any weight in the international arena and the notorious "face", but its own statehood as such. There is absolutely no doubt about this. There are very few ways for an "honorable retreat" from that extremely dangerous "dead end" into which the parties to the conflict are getting deeper and deeper, and they are not obvious (if they exist at all).

It is precisely for these reasons, first of all, that one should not compare the Caribbean and Ukrainian crises. The current situation is much more dangerous and carries a lot more "pitfalls" and risks than the events of 1962. It is even difficult to imagine how much wisdom and patience the world leaders will need to find an adequate way out of it that does not threaten general destruction.
Reporterin Yandex News
Reporterin Yandex Zen
5 comments
Information
Dear reader, to leave comments on the publication, you must sign in.