"Ah, a symmetrical answer..." Ukrainian saboteurs in the deep rear of Russia 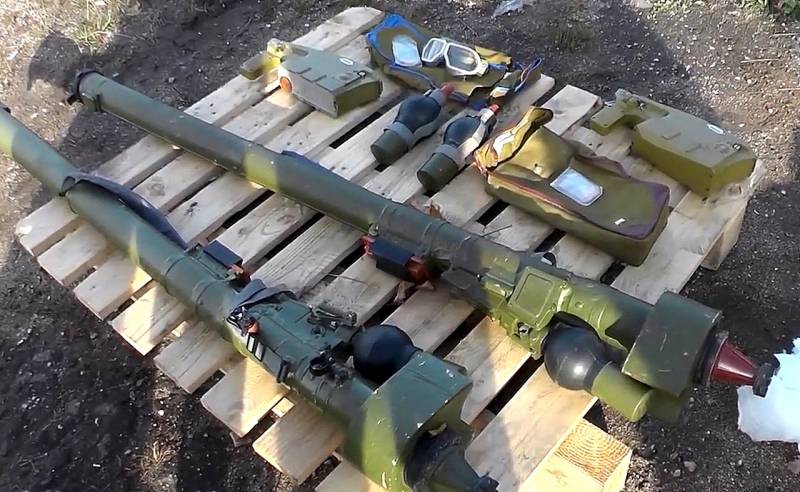 On October 12, the FSB prevented three terrorist attacks at once, which Ukrainian saboteurs were going to carry out on the territory of mainland Russia. In Nizhny Tagil, a loner was detained who was planning a terrorist attack in an administrative building, in Bryansk, a bomber who was preparing an attack on a "logistics center", although without specifying which one (it could be any warehouse or railway junction). Finally, the largest fish was caught in the Moscow region: a saboteur who entered through Estonia with two Igla MANPADS in a car cache. This one was going to shoot down a passenger plane with their help.


The situation is taking the expected turn: it seems that in response to attacks on infrastructure, the Ukrainian Reich Chancellery is launching its “retribution” operation aimed at terrorizing our population deep in Russia.


The Nazis are trying to cheer up their own population with a new wave of schizophrenic, in the medical sense of the word, propaganda: “Muscovites spent so many hundreds of millions of dollars worth of rockets, and destroyed only 30% of our energy system, their strikes are ineffective, so there will be rolling blackouts throughout the country ". Together with the widely used methods of intimidation, it still works and may continue to work for a long time - or maybe not: in the special Paralympics of a de-energized “TV” and a turned off “refrigerator”, the latter has a much better chance. And even while maintaining the full loyalty of the population, further destruction of the infrastructure will make the work of the fascist rear practically impossible.

Not surprisingly, the Kyiv regime seeks to stop attacks on its critical targets as soon as possible. Its ability to directly repel attacks, as it turned out, is rather limited, so it is absolutely not surprising that the Nazis decided to act "on the contrary."

"Canned food" in the bins of the Motherland


The fascists also do not have the resources to inflict retaliatory strikes on our infrastructure on an equal scale, so “strike on the psyche” is a completely natural choice for them. And, I must say, they organize them very quickly.

The most active discrediting of our air strikes in the information field began already on Judgment Day on October 10, and this is not about official statements, but about the activities of bots in social networks. In the afternoon, resonant comments began to appear everywhere, such as “what’s the point of hitting power plants, maybe it’s better to use the same thing at the front?” Shock and communication failures still reigned throughout Ukraine, so, one must understand, the generators of these smart thoughts were not sitting there and, perhaps, not even in the near abroad, but directly within the Russian Federation.

When the situation cleared up a bit and access to the Internet from Ukraine was restored, many "hulks" had a question - why was it necessary to touch the BRIDGE ?! TsIPSO creatively turned it into another “point of view of sane Russians”: they say, “what is the use of the suffering of civilians in their rear? Aren't you afraid that now in our rear they will tear something in revenge? Sometimes, between the lines of these pitiful songs, conspiracy theories are twisted that the Ukrainians did not touch the Crimean bridge at all, and the explosion “in fact” was staged by the Russian special services in order to “justify terrorist attacks on Ukraine”, and further, that in general, all or most shelling of Russian territory - provocations of "gebni".

At the same time, the Nazis have a lot of opportunities for organizing terrorist attacks and petty sabotage in Russia. First of all, they definitely do not experience problems with the number of agents: the number of only Ukrainian “migrant workers” who stayed in the Russian Federation until February 24 was estimated at 2 million, and not all former Ukrainians who received Russian passports received them “in the heart” either. For example, it is stated that the failed Nizhny Tagil saboteur arrived from Ukraine back in 2014; approximately the same “bookmark man” Tsyganenko, who had been waiting for his finest hour in Donetsk for years, helped the saboteur Vovk with organizing an assassination attempt on the Dugins.

It is somewhat more difficult with the extraction of weapons and explosives, but these issues are solved one way or another. That is why, by the way, the Ukrainian “rocketeer” was not caught right on the Estonian border, but was “led” to Moscow itself: in order, if you’re lucky, to catch his colleagues in a dangerous business on the spot as well. However, one must understand that there are a huge number of old-fashioned methods of sabotage on the same power grids and railways without the help of prohibited items, and they are well known to the enemy.

And more important (and more dangerous) of all is that the bulk of sabotage should be expected not in the front-line regions, which are already quite tense, but in the deep rear. And if it is possible (somewhat idealized, but still) from the special services to expect approximately the same level of vigilance throughout the country, then the civilian population far from the NVO zone, even emotionally wound up, is hardly practically ready to face an enemy attack in reality.

If the Nazis really raise all their "sleeping" agents for dozens of terrorist attacks in a row, then some of the attempts have a chance of "success" purely statistically. And it is natural that each of these “successes” will be untwisted to the fullest and brought under the already launched record “ours are hitting power plants - but what if we ourselves are like that?” Moreover, unlike the explosion on the Crimean bridge, for which the Ukrainians first took responsibility (and received a forelock on their head from Uncle Sam for this), enemy propaganda will attribute every successful terrorist attack in the Russian Federation to a provocation of the "fake structure" of the FSB, or at least on "pro-Ukrainian anti-Putin partisans."

The information background for this was updated in advance. So, on October 4, literally a few days before the explosion on the bridge, the FBK (an extremist organization) announced the "revival" of its "headquarters" throughout Russia - but now underground, and precisely as terrorist cells. Another well-known "oppositionist" Ponomarev (foreign agent) even managed to write down the sabotage on the bridge as an asset of the "secret armed resistance", which he allegedly commands. And in principle, all Russian-language media-foreign agents have recently increased the intensity of "incendiary" appeals.

From October 10, they were joined by “mouthpieces” of clearly Ukrainian origin, persistently demanding from the audience to organize any, even the smallest (such as damage and arson of cars) sabotage as soon as possible and more often, and especially in both capitals. It is curious that such appeals also extend to a foreign-language (English-, German-, French-speaking) audience - obviously, with an eye to substitute "foreign tourists" and give the Kyiv regime a reason to scream about this to the whole world: "NATO, your citizens are being thrown into the Lubyanka cellars hit Russia!

However, the last trick is unlikely to succeed, even if some foreigner really tries to set something on fire. However, the well-known “timeliness” of these changes on the air suggests that a large-scale sabotage campaign in the Russian rear by the Nazis had been preparing for some time (probably after the announcement of partial mobilization), and the explosion on the Crimean bridge was a yellow-Blakyt signal to its beginning. And although in Kyiv they still hoped that this time the answer would not arrive, some fallback versions of the informational narrative for this case were provided and launched, so to speak, “automatically”. The plan of simple intimidation turned into a plan of "retaliation" - intimidation.

This is another argument in favor of the fact that, in addition to infrastructure, our strikes should be aimed at the speedy destruction of the fascist command authorities. Until all the brains are knocked out of the Kyiv "decision-making centers", they will invent more and more intrigues against Russia.
Reporterin Yandex News
Reporterin Yandex Zen
11 comments
Information
Dear reader, to leave comments on the publication, you must sign in.