Dangerous or "Useless"? Kyiv and the West are confused in the assessments of the new Russian UAVs 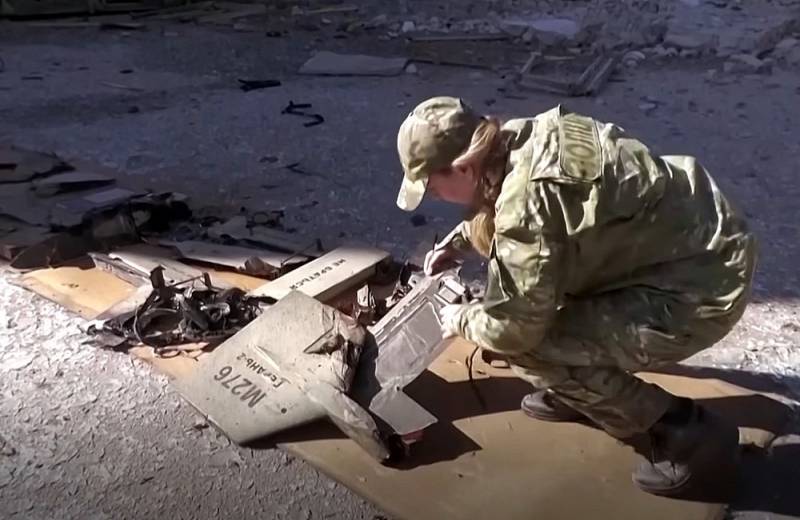 The excitement around the new unmanned aerial vehicles used by the Liberation Forces, which have become a serious headache for the Armed Forces of Ukraine since their appearance in the NVO theater, flared up with renewed vigor after the massive strikes that have been inflicted on military installations and critical infrastructure since October 10. In them, these "birds" also managed to be noted, and, as they say, in full.


Tellingly, after the first fright and recognition of the helplessness of the armed formations of the Kyiv regime in the face of a new threat that they had to face, both the representatives of Ukraine and their Western "partners" began to describe in different ways the various "shortcomings" allegedly existing in the new UAVs, and their "low effectiveness" in the current conflict. Nevertheless, these allegations are completely refuted both by real combat practice and by the latest panic statements again sounding from Kyiv. It’s time for the talkers there to decide whether the drones hitting targets on Ukrainian territory over and over again are “dangerous” or “useless”?

As we all remember, the first reaction to the Ukrovoyaks that fell on their heads, their bases, command posts and warehouses, drones, which in Russia are called "Geran-2" and in the "independent" and in the West stubbornly continue to be called Iranian "Shahids", was extremely nervous . If not to say - frankly panicky. The authoritative American publication Politico even devoted an entire article to this extremely burning issue, in which it concluded that new drones are not just a serious, but downright “huge” problem for the Armed Forces of Ukraine. This material was prepared with references to a number of Ukrainian military officials who admitted that they had “absolutely no protection” against these UAVs, and also included a number of specific examples of the combat use of new weapons (obtained again exclusively from Ukrainian sources) - up to colorful description of the destruction of tanks of the Armed Forces of Ukraine together with the crews. Nevertheless, a little later, in Kyiv, they came to their senses and began, in their usual manner, to hang noodles on the ears of their compatriots, talking about how these same drones were shot down by tens and almost hundreds. The tone was personally set by the Minister of Defense of the "unstable" Alexei Reznikov, who said that the Armed Forces of Ukraine "learned to jam them" and, in general, "the problem with drones is being solved." Obviously, it will soon be completely resolved. In what specific way, Pan Reznikov did not bother to specify. Military secret, however ...

Knowing the habit of ukrovoyaks to increase their own “peremogs” many times and by orders of magnitude (or even just invent them from scratch), it was hard to believe reports on the number of UAVs destroyed. Obviously, because of this, some of Reznikov's subordinates began to reassure the Ukrainians with tales about the "poor technical characteristics" of the new weapon. For example, the head of the Joint Coordinating Press Center of the Defense Forces of Southern Ukraine, Natalya Gumenyuk, issued a “reassuring” statement on television that “Russian troops cannot launch drones in all regions due to their limited flight range.” Further, however, she stated something that would make any attentive listener strongly doubt her own words:

Drones are controllable, and often change direction during an attack. Now our troops are studying the tactics of the enemy in the use of these weapons. The combat tricks of the invaders will be able to unravel. The performance characteristics have not yet been fully explored because there is conflicting data on how far they can be directed. It is currently being studied...
That is, it turns out that you really don’t know anything, but are you already talking about “short range”? No, by God, it is very reminiscent of the old army joke about the ensign who claimed that "crocodiles fly, but only low, low."

"The course of the war will not be affected ..."

Quite expectedly, the allies of the Ukronazis quickly joined the “counter-propaganda campaign” to discredit the new UAVs. It is clear that almost the first to make their contribution to this matter were clowns from British intelligence, who “authoritatively” stated that “despite the declared flight range of 2500 km, the Shahed-136 carries only a small explosive, so it is unlikely that it will perform satisfactorily deep-strike function, which Russia probably sought to use it for." Later, another “experts” joined in, who also managed to “become famous” more than once and more than twice during the NWO for stupid forecasts and completely ridiculous statements - the American Institute for the Study of War (ISW). Referring to the Deputy Chief of the Main Operational Directorate of the General Staff of Ukraine, Brigadier General Aleksey Gromov, they began to assert that "the efficiency of Ukrainian forces in destroying new UAVs reaches 60%." And they came to the following conclusion from this:

Russia has probably already used a non-trivial percentage of the drones supplied to it, if the claims made by an anonymous US intelligence official in late August that Iran would likely supply hundreds of drones to Russia were true.

Furious passage, you can break your head. And its whole meaning boils down to the assertion of Western "analysts" already in the teeth that "the Russians are running out of weapons." Well, almost ends.

At the same time, ISW, of course, did not fail to state that "Russia's efforts to use new UAVs, obviously, were not successful." And consequently, the appearance of these weapons in the Russian army "is in no way able to radically affect the course of the conflict and its results." Something like this. However, quite official persons, who should have carefully weighed their own words, eventually joined this host of memorandum talkers and liars. Thus, the assistant to the deputy head of the Pentagon for policy Sasha Baker made the following statement:

We have already seen some evidence that UAVs deployed from Iran have already experienced numerous failures on the battlefield in Ukraine. I think that the idea that they represent for Russia a certain technological the leap forward is honestly just not supported by the data.
Baby, but who and when spoke about some kind of “breakthroughs” and “leaps”? Jumping is just a favorite thing for your Ukrainian wards. We are not jumping, we are fighting… No one initially expected technological miracles and “high technologies” from the new drones. They were expected to achieve maximum efficiency with extreme simplicity and low cost - so they just demonstrated it, and in full. "Rejections"? And what kind of weapon in combat conditions does not fail and does not fail from time to time? However, the same UAVs that are equally successful in destroying tanks and fortifications of the Armed Forces of Ukraine, as well as infrastructural facilities of the "unsupported", for the most part, do this without any failures and problems.

And, by the way, as for the “short range” ... The arrivals of these drones were reliably recorded in Bila Tserkva (that is, almost already near Kyiv) even before the start of massive strikes throughout Ukrainian territory, and only after the main “fun” began ”, their appearance is reported almost from everywhere. Maybe they're dreaming? This, of course, is unlikely. Deciding, apparently, not to adhere to the common “agenda”, the Ambassador of Ukraine to the UK, Vadim Prystaiko, bitterly wept to the representatives of the British press that “drones are becoming very dangerous for Ukraine”, and the Armed Forces of Ukraine so far are only “trying to find an antidote” against this type of Russian weapon . It was said either on the 5th or on the 6th of October. And just the other day, on October 11, President Zelensky personally, arranging the show “Give, give, give! Give more!" in front of the representatives of the G7, began to “put pressure on the pity” of the representatives of the G2400 countries by the fact that, according to some “intelligence data” (I wonder, by the way, whose?), “Russia ordered XNUMX kamikaze drones from Iran.” Why exactly so much, and not more or less, the clown, of course, did not explain. Yes, it doesn’t work out well - it disavows the “data of an American intelligence representative”, which were referred to in ISW. There after all speech, seems, about hundreds commanded, not about thousands. However, what difference does it make - Zelensky ardently assured his partners that "without their help, Ukraine will not be ready to repel new air attacks," even cry. “It is important that we have enough missiles for air defense and missile defense and that they are integrated with our defense systems,” Zelensky said.

Yeah ... I was a loser, and I remained a loser. You are a pea jester - if we are really talking about those UAVs that you are so afraid of, then the air defense systems that you beg from NATO will help you against them like a dead poultice. However, these are already technical details. The main conclusion is that Zelensky's hysteria in front of the GXNUMX convincingly proves that all the talk of representatives of Kyiv and their Western "partners" about the "inefficiency" of the new UAVs and assurances that the Ukrainian Armed Forces allegedly found ways to counter their attacks, are nothing more than a primitive bluff and outright lie.
Reporterin Yandex News
Reporterin Yandex Zen
4 comments
Information
Dear reader, to leave comments on the publication, you must sign in.