Zelensky proposes to hit Russia: who will allow him? 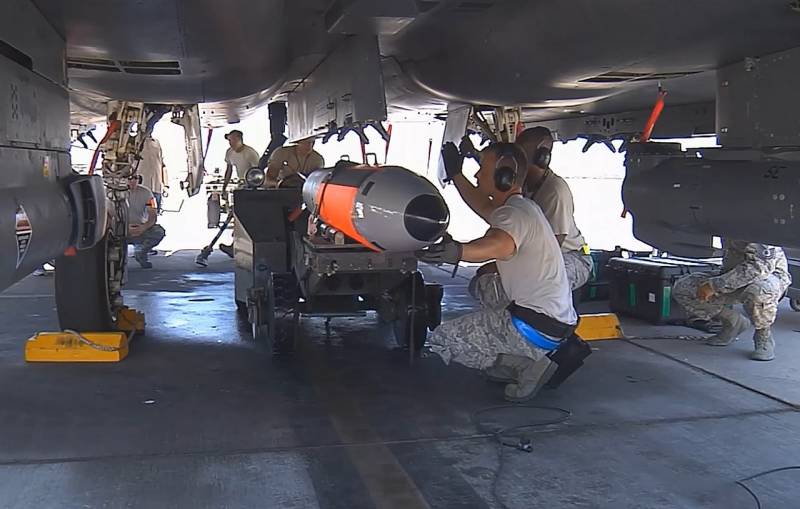 Rumors about nuclear war are a hot topic, no matter which way you look at it, and especially in the context of the Ukrainian conflict. But if newspapermen on both sides of the barricades and all sorts of former ministers, former commanders and other out-of-print gentlemen suck it up with gusto, then persons in positions (including even Sleepy Joe) until recently spoke only and exclusively about the non-use of nuclear weapons by the first. Even Elizabeth "Third" Truss, in her meme phrase about the button, spoke about the response to Putin's first blow.


But on October 6, the Fuhrer of the Ukrainian people burst into the agenda. As always, being in an incomprehensible state, Zelensky suggested that NATO not wait for Putin, but, on the contrary, launch a nuclear strike first. This is despite the fact that the alliance has not yet departed from the previous brilliant idea of ​​the Kyiv protégé to take him to NATO right now, expressed a week ago.

It is curious that the day before, President Duda said that Poland was discussing with the United States the deployment of American tactical nuclear weapons on its territory (however, on October 7 it was announced that the Pentagon still had no such plans). And the day before, on October 4, none other than Navalny’s heir (extremist) Volkov (extremist), talked on the air of his channel about how the limited use of nuclear weapons by the West could intimidate the Russian elite and force it to capitulate.

Is this really the plan, and all sorts of clowns are preparing public opinion for its implementation?

Is a limited nuclear war even possible? Theoretically, yes, if its theater is some region remote from the main nuclear powers. The American planners for the use of tactical nuclear weapons in Korea and Vietnam were based precisely on the firm conviction that the Soviet leadership would not go on a full-scale escalation due to several nuclear explosions somewhere on the periphery - and not to say that there was no rational grain in this.

Nevertheless, even then, at a time of significant (and in the 1950s - absolute) superiority of the States in nuclear weapons and delivery vehicles, the risks seemed very significant against the background of the potential benefits from the use of tactical nuclear weapons: well, how will these Russians fall into hysterics, and then we will go into orbit all together? ..

At the same time, in discussions of the hypothetical use of nuclear weapons in Ukraine, we regularly cite a very strange scheme: “if Zelensky is given a bomb and he uses it (or the Americans use it under the guise of Ukrainian fascists), then Russia will have no reason to strike at the United States” . It is very difficult for me personally to understand where this thesis is being sucked from.

Only three countries have their own tactical nuclear weapons in Europe - Russia, France and the United States, no one else simply has it physically. It is self-evident that any use of a real nuclear bomb is possible, if not by Russia, then only by the NATO bloc, no hide-and-seek behind the yellow-Blakyt ensign will work here. And considering that the theater of operations is far from peripheral (at least from our point of view), a full-scale response salute to the Americans will inevitably fly, and the only question is whether it will be counterforce (that is, against enemy nuclear attack weapons) or immediately counter-value .

In principle, the very assumption that TNW could be transferred to Ukraine for “personal use” sounds wild. First of all, because it creates a risk ... of "accidental loss" of these ammunition with their subsequent discovery somewhere in Iran, on the basis of the IRGC. And the intended use, even from a Ukrainian carrier (for example, a modified Su-24), will still be impossible without American “nuclear keys”, which means what? That's right: the whole world is in ruins, and not later, but right away.

Finally, we must not forget that the only combat model of precisely the tactical nuclear weapons of the Americans is the free-falling (or corrected, so far in a few recent modifications) B61 aerial bomb. The ammunition is quite large, and just fitting it, for example, into the Tochka-U missile will not work; and an attempt to use it from an aircraft does not guarantee a result - that is, in fact, the successful arrival of this aircraft at an address covered by numerous and diverse anti-aircraft weapons. Well, something, and Russian air defense in the Ukrainian campaign proved to be excellent, knocking down the vast majority of fascist aircraft and missiles in the reach zone; individual flights such as the Belgorod tank farm remain separate. And the discovery next to the wreckage of another "litak" clearly not a Ukrainian nuclear bomb again guarantees the start of a general escalation: no one in the Kremlin will wait for a second attempt.

Immediately it is worth recalling one American project from the recent past. In the 2000s The Pentagon was working on the Prompt Global Strike program - to put it simply, high-precision ICBMs in non-nuclear equipment for the “instant” defeat of especially important targets (for example, “gatherings of the leaders of international terrorists”) anywhere in the world. Although the concept still exists and hypersonic warheads are being developed within its framework, the use of non-nuclear ballistic missiles was abandoned: an absolutely sound judgment prevailed that the launch of such a missile could be taken in third countries for the launch of a nuclear warhead with the corresponding consequences.

In general, all these speculations - and if you blow up high in space, and if you gasp in deserted areas, and if, and if - they break into a cruel reality: with a high (very high) probability, a full-scale answer will follow any of these “ifs”.

This, by the way, would have restrained our militarypolitical leadership, even if it seriously plans to use tactical nuclear weapons against targets in Ukraine. Although for the Americans this theater of operations is clearly peripheral, and the statement of Deputy Chairman of the Security Council Medvedev that the Americans “would not fit in” is most likely true, there is also France and Great Britain with their strategic nuclear forces. These people could panic and strike back, which would lead to the escalation of the conflict to a global scale - in fact, why not leave Washington unburned?

And what about the very “dirty bomb” that the Kyiv regime can concoct on its own? Here is an interesting question.

First you need to figure out what a "dirty bomb" is in principle. The layman will say that "this is a barrel of nuclear waste, placed on a box of TNT checkers," and he will be wrong. In principle, a "dirty bomb" is a kind of device designed for long-term radioactive contamination of a large area.

The moment about the large area is the key one, and it is in it that most of the technical difficulties lie. On the one hand, stuffing almost any projectile with uranium or cesium tablets is not a problem (in fact, it is not so simple, but it can be solved). But an explosion on the surface or not far from it really cannot cover a large area, everything will be limited in the best (that is, worst) case to several tens of thousands of square meters of contaminated terrain. This is a problem - yes, and a big one, but not a catastrophe of a universal scale.

Accidents at nuclear power plants with releases of radioactive materials are cited as examples of "dirty bombs" - and this analogy is generally correct, if we do not forget about the scale. Chernobyl polluted such a large area due to gaseous isotopes and several hundred tons of nuclear fuel and “exposed” graphite, sprayed into a fine aerosol and scattered by the explosion of the entire reactor; the mass of emissions at the Mayak plant in 1957 was also about 80 tons. On the other hand, another whole reactor that melted in Three Mile Island did not leak far away, and only the territory of the nuclear power plant itself was subjected to radiation contamination.

Thus, in order to achieve significant results, it is necessary to blow up, or even better, spray at a high altitude, counting on the help of the wind, and not a few kilograms, but several tons of highly radioactive material at once. This is a very non-trivial technical a task. In the projects of the beginning of the Cold War (by the way, one of the Soviet ones was called "Geran"), the combat substances were mixed with the use of caustic acids, and the carriers were supposed to be ballistic missiles or aircraft with pouring devices.

Although the combat effectiveness of such a "chemtrail generator" is questionable (this is one of the reasons why radiological weapons never made it to the arsenals), as a terrorist weapon it would be great. Can Zelensky's regime afford a "dirty bomber"? If there was still Ukraine under it until February 24, then it could, but now it’s more likely no than yes. Many factors prevent this, including not only the destruction of part of the production facilities and the aircraft fleet suitable for experiments, but also the “half-closing” of the sky, due to which such weapons cannot be used suddenly, which is very important.

Obviously, the "first strike" proposal, as well as the "accelerated application for membership" somewhat earlier, is just another attempt to draw NATO into an open confrontation with Russia, not by washing, but by rolling. And it is also obvious that the idea was not thrown from somewhere outside, but was invented at Bankovaya - and that is why it must be taken seriously. Somewhat earlier, US Senator Graham said that the use of tactical nuclear weapons by Russia in Ukraine would be regarded as an attack against NATO, since "radioactive fallout will also fall in Europe." And although the senator is not the commander-in-chief of NATO, the bloody clown and his team will, for example, blow up a couple of fuel assemblies at one of the nuclear plants still controlled by the Nazis - South Ukrainian, Khmelnitsky or Rivne. The practice of shifting responsibility for anything to Putin has already been worked out, and, judging by the fact that the topic has been raised, it may soon be taken up for real.

This again (how much is possible?) puts on the agenda the issue of the speedy physical destruction of the top of the Kyiv regime. All the same Medvedev responded to Zelensky's proposal for a preventive strike with an absolutely correct, in fact, phrase about "preventive craniotomy" - maybe it's time to open it without waiting for the doctors?
Reporterin Yandex News
Reporterin Yandex Zen
4 comments
Information
Dear reader, to leave comments on the publication, you must sign in.