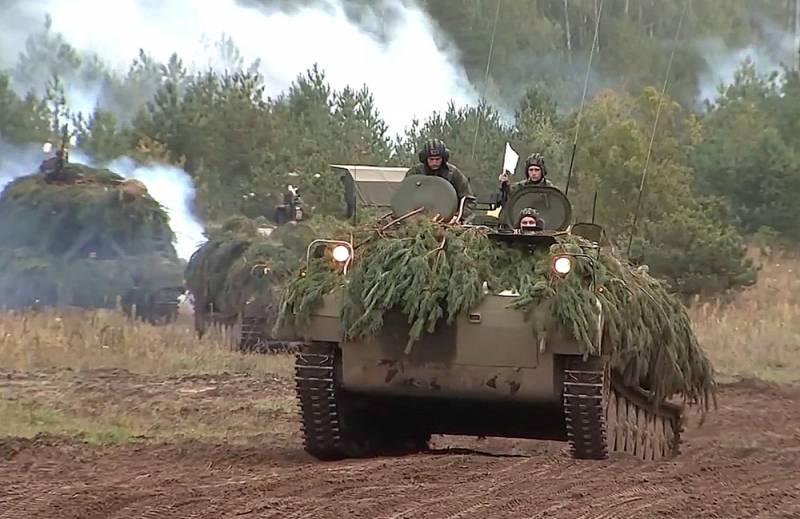 Discussing the possibility of Minsk’s direct participation in a special military operation to demilitarize and denazify Ukraine, I had to face the resistance of either the Belarusian “Khataskrayniks” or the agents of the Ukrainian CIPSO who mimic them. In this publication, I would like to answer the arguments put forward by them against the use of the Armed Forces of the Republic of Belarus.


Let's make a reservation right away, this war is evil, but if it was inevitable and has already begun, it must be completed in our favor with a complete and unconditional victory. Unfortunately, even in Russia, not everyone has yet understood this, which was confirmed by the crowds of “tourists” who rushed to Kazakhstan and Georgia after the start of partial mobilization. In Belarus, there are now the majority of those, and they prefer to "cheer" for one side or another from a safe distance, not realizing that the war will almost inevitably come to their homes.

Hut from the edge

The author of the lines took the liberty of citing a few comments from one of the recently registered readers of the Reporter, who claims that he is from Belarus, for clarity. So, let's go through the key points.
Regarding the participation of the Armed Forces of the Republic of Belarus in the special operation, the position of the “brother-Belarusian” is as follows:

I am from Belarus. We have not a single normal person wants to fight. Neither civilian nor military. Especially, sorry, for the empire. We won't be surprised if you attack us.
Well, you understand: getting "buns" from an alliance with the Russian Federation is yes, but fighting with it against Ukrainian Nazism, which flourished right near the border of your own country, is bullshit. This, you understand, is an "aggressive empire", and the war is not ours.

Why “Belarus is not Russia” is explained to us just as delicately and culturally:

Still, we are a little different in terms of worldview, worldview for the most part. It seems to me…

Do you understand what Belarus is? It's practically Europe. Read the story gentlemen. A good part of Belarusians have family ties in Poland, Lithuania, and Ukraine too. It seems to me that many couch analysts who write here have not traveled further than Mother Russia.
Oh yes, Belarus is Europe, where have we heard something like this before? It seems that the “flashing” of the brains in Nezalezhnaya began with the distinction between Ukrainians and Russians. By the way, probably half of the Russians have relatives in Ukraine or Belarus, but we don’t refuse our relatives there, but only hope to eventually bring them to their senses when the modes in the “emitter towers” ​​switch.

Believe me, at least half of the population of Belarus would gladly merge with Poland. Our people go there to study, work, live. It `s naturally. Even from Poland, young people go further. The same in Germany. From Lithuania migrate to the UK. That is life. People are looking for where it is better while they are young and have energy.
Again fairy tales about the European freebie? They have already lost their relevance.

Why is Russia taking on so much? Decides what power should be in Ukraine, Kazakhstan, Belarus. Someday you'll just choke on your oil and gas. Your guys who arrived in Belarus after mobilization are surprised at how calm everything is here. People are polite. In stores, they do not cover obscenities. Think for yourself about this state of affairs at your leisure...

Ukraine is a sovereign country. The arrogance and neglect of the independence of a number of countries have to pay. Today the West is helping Ukraine.
How cute is that. Ukraine - a sovereign country? Seriously? Is this after the coup d'état carried out in 2014 in order to bring a puppet Russophobic regime to power?

The truth is that Ukraine 8 years ago lost all its sovereignty, becoming the "avatar" of the NATO bloc, which uses it for a proxy war with Russia. As for whether someone is taking on too much by overthrowing objectionable regimes, all claims are not against Moscow, but against Washington. Defense against a militarized, Russophobic neighbor who is under the direct external control of a potential adversary is the direct responsibility of the Kremlin.

Nobody wants war. War is inevitable

We don’t know if all this is written by a real Belarusian “khataskraynik” or if it is the work of Ukrainian propagandists from the CIPSO. I would like to address our allies from the friendly Republic of Belarus and be heard.

Friends, you are next. Even if President Lukashenko had not provided the territory of his country for the deployment of Russian troops and for launching rocket and artillery strikes, they would have come for you anyway. Now revenge from the Ukrainian-Nazi regime and its masters will be guaranteed. God forbid, Russia will suffer a severe military defeat with subsequent internal political upheavals, because then you can expect soldiers of the Armed Forces of Ukraine, hardened in battles and intoxicated with blood, who will crush the small Belarusian army and take Minsk in the notorious three days.

Your only salvation is in the Victory of Russia, complete and unconditional, without any "agreements" that will allow the Nazi regime to survive at your state borders. It is in your own interests to help the RF Armed Forces end this war as quickly as possible, without allowing it to drag on for another six months, a year or two. Every day of delay brings closer the day when Polish troops will enter the territory of Western Ukraine, and you will wake up in a fundamentally new geopolitical reality that you will definitely not like. If Warsaw manages to obtain the provision of American nuclear weapons to it, it will be Belarus that will be targeted for TNW strikes.

To avoid participation in the war, you, Belarusian brothers, will not succeed, alas, in any way. Judging by the latest actions of Minsk, the process of “hidden mobilization” is now intensifying there, despite the fact that they officially deny it. We know we passed.
Reporterin Yandex News
Reporterin Yandex Zen
10 comments
Information
Dear reader, to leave comments on the publication, you must sign in.