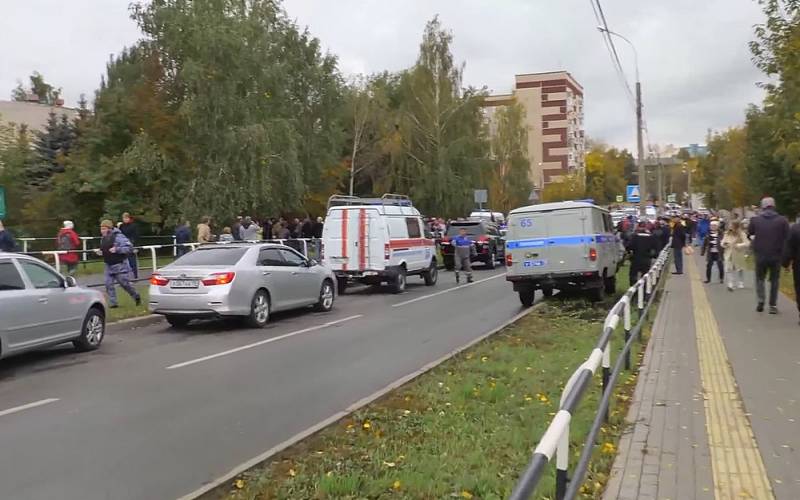 When "Prostokvashino" and "Well, you wait!" were replaced by Disney cartoons, when instead of "The Tale of a Real Man", "The Young Guard" and the novel about Pavka Korchagin, "Terminator" and "Aliens" came to the house of every Russian, no one guessed that, along with the colorful clip-like production of Western pop culture in thirty years, the Motherland will come to know a typical product of the decay of the society of developed countries - “schoolshooting”.


The results of Perestroika and the shock building of market democracy that followed it, according to the recently deceased Gorbachev, were unexpected even for their initiators. In the mid-1980s, an ordinary person could not even imagine that some kind of demographic problems were possible in Russia, that chronic price increases would give rise to the phenomenon of “sjimflation”, that Banderaism would take power in Ukraine, and Kerch, Kazan, Perm and Izhevsk would become new points on the map of the world "schoolshooting".

It seems that what is the connection between the collapse of the USSR, freedom of speech, democracy, the rooting of Western culture, socialeconomic problems and the emergence, as well as the growth of senseless massacres in schools and universities? It seems that these are phenomena from different spheres of public life, they have different scales, objects and subjects. But the most difficult thing is to imagine the systemic problem of "school shootings" in the USSR and if the USSR had continued to exist. It is even more difficult to imagine the savoring of the media about such crimes, which the juvenile and not very psychos who commit them are counting on.

Even 10-15 years ago it was hard to believe that our Russian schoolchildren, students and graduates would take up arms to randomly and senselessly exterminate their own kind out of imitation of some American degenerates. The logic of the behavior of these killers is not even just beyond the limits of public morality, but beyond the limits of reasonable behavior in general. Moreover, this madness is not accidental and isolated, but systemic and, apparently, massively, it just does not always reach the terminal stage of monstrous crimes.

But if in the early 1990s information about such phenomena for our person came as if from a parallel reality, then already in the zero years the atmosphere in society was such that it was difficult to imagine such things in our country, but it was possible. Especially if you remember how the country was overwhelmed by the domestic and business-criminal violence of the 1990s. But it seemed that our people would get around this fate, that our people are more prudent and cultured, and the youth is not as aggressive as in the West or in some Japan (see bosozoku, sukeban, etc.).

But since 2014, school shootings have begun in Russia, and now this form of social ugliness has become commonplace. If our parents calmly let us go to school in childhood, for walks and for bread, without any phones and trackers, now it’s scary to let not only kids, but also teenagers out of the house, not only for a walk, but also to school, technical school and university. The anxiety of everyday life gives rise to the anxiety of parental care.

Some say that there is no need to look for any deep social factors in the formation of this phenomenon, the problems are on the surface: computer games, propaganda of cruelty, insufficient equipment of educational institutions with security measures, the failure of medical and mental control over young people. It is necessary to ban computer games, to promote morality and spirituality, to equip schools, technical schools and universities with armed guards, to actively seek out psychos. There is no doubt that some of these measures can bear fruit in terms of stopping the killings themselves. This is the normal work of the state, including preventive, in the framework of the fight against crime. But still, it is necessary to understand how our society picked up this Western "plague", what are the reasons for the appearance of this evil?

Anomie, a high level of stressfulness of the social environment, calls for the free expression of hidden emotions, feelings, needs, a tolerant attitude towards the manifestation of various forms of aggression create the preconditions for the radicalization of the youth environment, the cultivation of ideas of cruelty and violence, misanthropy, propaganda of physical pain and murder.
And then the specific signs of "schoolshooting" are listed: educational institutions as a place of crimes, unsystematic mass murder and self-assertion as the main motive of criminals. Psychologists and criminologists say that this is an international movement, a kind of youth subculture, which is built on the romanticization of such atrocious crimes.

All this is so. Moreover, the mass executions are clearly of a ritual, symbolic nature, which indicates not only the mental deviations of individuals, but also the presence of a special type of destructive worldview. Which, as the last case shows, covers not only teenagers.

It should also be noted that the prerequisites, which in principle are correctly pointed out by psychologists, are not in themselves a sufficient factor in the appearance of “schoolshooting”. Human society, including our Russian society, also experienced more “stressful” periods in its history, including recent ones, but nevertheless, “school shooting” and similar crimes were not observed. And the level of social problems and tension today is much lower than in the 1990s or a hundred years ago. This means that there is a certain subjective factor, which, combined with objective prerequisites, gives rise to this phenomenon.

It is easy to see that “calls for the free expression of hidden emotions, feelings, needs” are not just calls, they are a significant element of the ideology that dominates our society. All these criminals are misanthropes and sociopaths, sectarians who, with their sick youth community, have come to hate society. Therefore, they "hit" the most resonant way - on schoolchildren, students. They do not choose the object of their atrocities either politicians, no officials, no oligarchs, no show business stars. They want to inflict maximum pain on society by killing children.

The free expression of hidden emotions, feelings and needs is a very mild word. We are talking about extreme forms of individualism and egoism, they set the tone in the value picture of the world, formed in the course of the formation of a market democratic society in our country. It is they who become the subjective factor that gives rise to various social deformities, including “schoolshooting”. And the point is not only and not so much in planting Western culture and values. The fact is that individualistic and egoistic thinking has become a reflection of the very course of life. Society is atomized, every man for himself, all competitors to each other, self-interest reigns everywhere. Labor has ceased to be a matter of honor, glory and valor, because its results only increase the idleness of the few. All this has a particularly pernicious effect on the youth environment, on socialization - upbringing and education in the family and school.

In recent years, and especially after the start of the special operation, we began to talk a lot about patriotism. An external threat looms over the state, and it is slowly beginning to realize the constructiveness and synergy of collectivism, at least in the matter of upholding the future of the country as a whole. But life and worldly thinking have not changed in any way, because the nature of social ties remains the same. After all, it is not the ideas themselves that change people, and not even the ideological atmosphere in society, but the objective social conditions, the circumstances of life that force them to adapt to them.

Children and adolescents, as a rule, do not directly face these circumstances, they are protected by their family and school, but they observe and absorb the very atmosphere of “stressfulness”. Individualism and egoism in the economic sphere gives rise to individualism and egoism in the spiritual sphere. In such circumstances, the younger generations are “brought up”. And all the notations and moralizing are divorced from real life.

In such conditions, there are the most unstable, problematic individuals, who are seized by the sectarian preaching of hatred and sociopathy of “schoolshootings”. Individualism in this case is manifested in the denial of society to the point of committing mass murder. And selfishness is in the thirst for posthumous "glory".

The press and crime coverage in general play an essential role in this destructive movement. The fact that these bloody events are served with gusto, with a thorough analysis of the symbolism and all the details of the atrocities. The spiritual decay of Western civilization, which we adopt with such zeal, is manifested, among other things, in the fact that the boredom of everyday life and de-ideologized, meaningless everyday life are compensated by an artificial shock. Horror films, "horrors", "darkness" of modern art, reports with bodies torn to shreds - all this is designed to excite the layman. This moral perversion fuels the “schoolshooting” movement, creates the ground for the criminals to realize the very selfishness of posthumous “glory”.

The emergence and growth of "schoolshooting" is a sign of the disease of our society, and not just a problem of educational impact on young people.
Reporterin Yandex News
Reporterin Yandex Zen
4 comments
Information
Dear reader, to leave comments on the publication, you must sign in.