"The path of deceit" or "the path of the warrior": the reaction of Russian society to partial mobilization 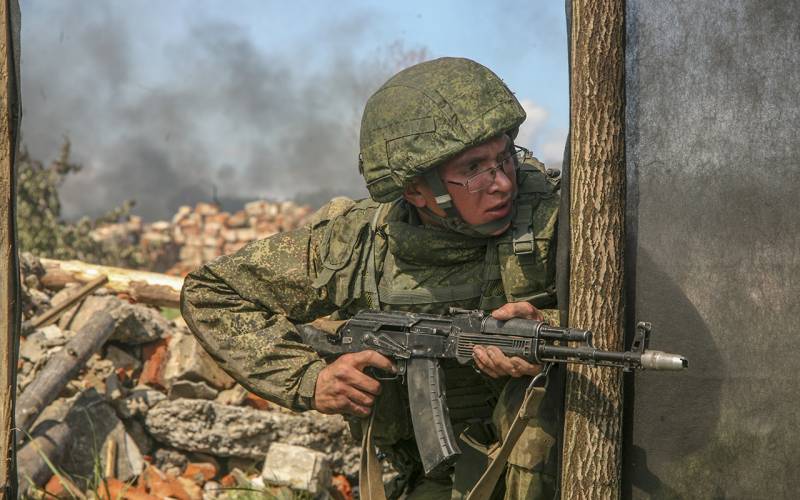 The start of a special military operation in Ukraine on February 24 also launched the process of a certain separation of our society: the separation of flies from meatballs and self-proclaimed cream (or should I say “splash”?) of society from the majority of “ordinary” people and real patriots. The partial mobilization announced on September 21 will apparently bring this process to its logical conclusion.

It's funny, but judging by the statistics of search requests from September 20-21, in Ukraine Putin's address aroused twice as much interest as in Russia - this is with a five times smaller population! Perhaps someday we will see a more detailed demographic breakdown into Russians under occupation and yellow-Blakith biomass.

However, a certain role was played by the fact that in our country the president’s address – quite natural for such an important occasion – was played “from every iron”, and it was not necessary to specifically look for a reference to it: it, like an oath, found an audience on its own. In the first hours after (long expected) News in the comments below them, that very “real nightmare” was going on - and here there is some sort of demographic breakdown for it, albeit by eye.

The largest volume of words was written by Russian women, frantically trying to find out which categories of citizens fall under mobilization and when exactly they will start sending summonses. Since the “dead phone” principle worked in full measure, the panicking young ladies could not find out anything sensible from each other, or the information simply sank - in a sea of ​​​​disturbing questions and fears about logistics, terms of sending to the front, medical guarantees, credit - mortgage problems and so on. However, this is a completely natural reaction to such a serious (and most importantly - “sudden”, yes) shake-up of the usual way of life.

But, in addition to socially disoriented women, two more categories of characters “came off” with might and main. The first one is sincere all-sweepers, judging by the accents, of the most diverse persuasion: not only “liberal”, but also “Marxist”, “religious” and so on and so forth. From whatever side they came, the essence of the statements was, in general, the same: “Ukraine is winning, so our men will now be thrown under rockets with one handle from a shovel for three!”

And the second category is professional bots. These either assented to the all-weakers, pretending to be them, or, on the contrary, they openly threw pro-Ukrainian slogans, photos and videos of our dead soldiers, promises to soon take Belgorod and Vladivostok ... In general, the TsIPSO did its cipso work to bring confusion and panic among " grateful" predominantly female audience.

The same work, for their part, was taken up by Russian-speaking foreign media. The leitmotifs are the same: “The Armed Forces of Ukraine are successfully advancing”, “the Russian army has huge losses” (with reference to Zaluzhny, foreign agents give a figure of 55 thousand only killed), “the mobilized will immediately be thrown to the slaughter”, “refuse to be mobilized”, “break contracts”, “go to rallies, burn military registration and enlistment offices”. Open calls for terrorist actions by foreign media and characters like Leonid Volkov (an extremist) are no longer a novelty, but until September 21 they were still not so massive and for the most part were first thrown through impersonal channels, and only then “covered” in foreign agency air.

And the day before the announcement of mobilization, when amendments to the Criminal Code of the Russian Federation concerning martial law were adopted, hostile sources began to disperse calls to “quit the service as quickly as possible, while there is still a chance to escape!” It's funny that they are almost followed by invitations to go to Ukraine and join "anti-Putin" armed formations, or even run right across the front line along with weapons and military technique.

A fresh move on the information war front was the massive ransom or “hijacking” of public accounts on social networks and Telegram channels, which were then hastily filled with “anti-war” content and instructions on how to evade mobilization. Groups and channels with the number of subscribers from a few people to tens of thousands of the most diverse topics were “transformed”: from kitchen recipes to “18+” content; according to some estimates, about 200 channels suddenly became “anti-war” on Telegram alone in a day. Perhaps, the sensational hacking and the “pacifist” mailing in the client network of the jewelry retailer “585” can also be attributed here.

Part of the enemy propaganda against the mobilization was directed against the Belarusian audience. On September 21, the “legitimate president” Tikhanovskaya spoke up: she stated that “Belarusians should not die for Putin and Lukashenka,” and called on them to evade the draft, and if they are still “caught”, lay down their arms at the front and surrender to Ukrainian fascists. In the Western media, the number of materials about Belarusian "volunteers" fighting on the "right" side has increased; in particular, about some ladies undergoing military training in Poland for the subsequent "liberation" of Belarus from the local "tyrant".

But the fact is that on September 20, Lukashenka demanded to check the readiness of the troops "to rise in alarm according to wartime standards." Although this can be regarded as a sign of a possible connection to the NVO and the Belarusian contingent, it is more likely that we are talking about preparing to repel a hypothetical aggression from Poland, where the local 18th mechanized division and the American armored forces are holding joint exercises.

It must be said that enemy propaganda failed to significantly shake the situation. According to the reports of the pro-Western "human rights" movements themselves, they managed to bring about two thousand people to rallies throughout the country - ten times less than in March on the occasion of the start of the SVO; the bulk was made up of completely snotty youth. A kind of quintessence of "pacifism" were three young girls from Moscow with smiles from ear to ear and a cheerful "no war!", Recording video selfies with bare breasts on the evening street.

A certain number of opponents of the mobilization decided to "vote with their feet", leaving Russia - there are no reliable statistics on them yet, but it is clear that there are at least several tens of thousands of them. However, since many of the young Russians who left in March-April managed to return, it is likely that some of the fugitives are turning this feint with their ears for the second time. It is characteristic that the hospitable foreign countries are even less happy with them than in spring: in particular, the leadership of the Baltic countries has already announced that they will not let in even those Russians who are trying to “slop down”, let them take Molotov cocktails and demolish the Putin regime!

The attitude of a realist to the Kalashnikov assault rifle

In principle, it was foolish to expect an unambiguously positive response to the mobilization, and this is one of the reasons why the authorities postponed its start until the last moment. To outweigh the fear of "unpopular" measures in high offices, it took painful military defeat and the loss of the Izyum Way. However, it and the massive participation of foreign "legionnaires" in the battles in the Izyum direction were able to convince the Russians that the whole of NATO is really fighting against us and the threat to the security of the Motherland is real.

Since enemy propaganda uses only those materials that can somehow be turned in the right direction, in other media you can see only young “pacifists” and individual citizens who are clearly unsuitable according to the criteria, but still received summons. But what the enemy mouthpieces do not want to relay is a video with huge crowds near the military registration and enlistment offices, in which both those who came on call and a considerable proportion of volunteers.

However, it seems that active preparations for mobilization began only after Izyum, so the events bear the stamp of a well-known "suddenly". According to reports from the field, there are indeed erroneous calls of unsuitable candidates, there are dozens of them around the country. At the same time, in some military registration and enlistment offices, citizens who want to self-mobilize are harshly and categorically kicked off. Apparently, as in combat units, the order in each specific military registration and enlistment office directly depends on the personality of the chief, and the small-town bureaucratic swamps that have bloomed for years have not yet stirred everywhere.

Fortunately, at least at the very top, there is relative order with the legislative basis for mobilization - and with informing the population about it. Detailed explanations about the composition of the conscripted contingent, material guarantees to the mobilized helped quickly calm the raging sea of ​​emotions. The state guaranteed that it did not intend (like the fascist Kyiv regime) to send its people one way, for recycling - but, on the contrary, it was waiting for them with victory and helping them return to peaceful life.

What raises certain concerns is the issue of knocking together and combat training of units. Although the “accounting for the practical experience of the NWO” has been declared, it is ambiguous in itself, and moreover, we interpret it ambiguously, and most importantly, it is hardly systematized. This is especially true of the operational experience of the campaign - and, accordingly, the officers and their work.

As for weapons and equipment, there is no doubt that a significant part will be outdated; for example, new videos have already appeared with a train of the next T-62MVs removed from conservation and battered BMP-2s. With this, unfortunately, there is nothing to be done - it remains only to thank the "damned communists" for the mountains of various "galoshes" left as a legacy. The release of new samples, of course, will continue, but it is unlikely that it will allow to directly “saturate” the parts with modern technology - and this, in turn, is unlikely to cheer up the fighters put into operation.

In this regard, I would like to hope that during the mobilization economics attention will be paid to the production and rationalization initiative "from below". From the very beginning of the SVO, small teams of enthusiasts launched almost handicraft production of all sorts of "little things": compact fabric stretchers for the wounded, masksets, and "folk" repellents were reported.

Enterprising citizens who have access to more sophisticated technological equipment supply the front with "cans" - silencers for small arms, "bombs" printed on 3D printers - cases for hand grenades (for dropping them from copters) and the "bomb throwers" themselves, as well as many other non-standard, but very necessary. It seems obvious that in the new conditions the people's "parallel military-industrial complex" should be supported by the state: the best samples are selected, standardized and material resources are allocated for their production - but will this be done or will the bureaucracy safely digest the initiative?

And the same question concerns, in fact, every aspect of the forthcoming work. Although the majority of society is ready to mobilize (in any case, it will not run away from mobilization), the state is required first of all to mobilize itself - to get rid of many old dogmas in the selection of personnel, the economy, military affairs and the mass media.
Reporterin Yandex News
Reporterin Yandex Zen
22 comments
Information
Dear reader, to leave comments on the publication, you must sign in.