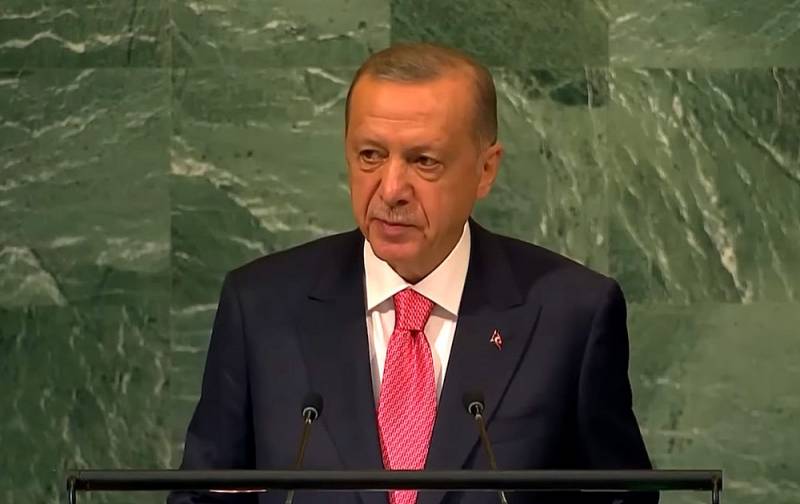 On September 20, the whole world was closely watching the Russian airwaves and was waiting for what this ominous Putin would say: would he announce mobilization or, like one movie character, would he immediately press that same “red button” live on air? As a result, Putin deceived everyone a little and said his weighty word the next day, and the open-mouthed audience missed another militarypolitical an event - certainly much less important, but not completely uninteresting.


The fact is that on September 19, the US government lifted the arms embargo against the Republic of Cyprus. Predictably, this step caused great approval and enthusiasm in Athens - but from Ankara there was a distinct gnashing of teeth.

Previous aggravation of relations between Greece and Turkey took place at the beginning of the summer, then the obvious initiator was Ankara and personally Sultan Erdogan, who poured authentic sophisticated threats against the Greeks. Turkey, in principle, is always considered an “aggressor” in this decades-long conflict, and for good reason: after all, it was the Turks who “squeezed out” part of Cyprus from the Greeks, and not vice versa.

But in the last month the situation has changed, at least in news tapes. The recent border incidents noted on the information field look (or are exposed) as provoked by the Greek side. So, on August 23, the Greek air patrol allegedly “conditionally attacked” Turkish fighters and forced them to hide in their native airspace; On August 28, another group of Turkish military aircraft was unpleasantly felt from all sides by the guidance station of the Greek S-300 air defense system. Finally, on September 11, a Greek border ship allegedly fired on a Turkish merchant ship in neutral waters.

What is happening: is it Turkish propaganda that has decided to temporarily change the record to a “victim of provocations” or are the Greeks really at risk of snapping the Ottoman bull on the horns?

Still, it looks more like they don’t even click, but they knock quite specifically - with Greek hands, but the Americans.

During the summer months, the United States significantly increased its military presence in Greece. In particular, the port of Alexandroupolis has become an important transshipment point on the way for arms deliveries to Ukraine (in addition, there is a terminal for receiving liquefied natural gas in the same port). The American contingent stationed in Greece has also increased, and it is planned to strengthen it further in the future.

The official reason for building up forces is known - this is a terrible orc horde in the east. It is assumed that if the Russian fleet suddenly makes a breakthrough from the Black Sea for some reason, then the American forces based in Alexandroupolis, Crete and other points will be able to quickly block the Dardanelles. However, Ankara suspects that this contingent should hold back not only the Russians, but also the Turks, and even declared this out loud.

The lifting of the Cypriot embargo means that almost certainly the Greek half of the island will soon have some of the stocks accumulated in Alexandroupolis - hardly HIMARS or M777 (their firing range is excessive for such an area), but 105-mm mountain howitzers and light armored vehicles may well change the destination from a Ukrainian city to a Cypriot port. In the 1974 conflict, the parties also used outdated weapons, and this did not bother anyone.

Erdogan, out of inertia, is trying to react to the obvious strengthening of the position of the Greeks harshly - but not that aggressively. In particular, speaking at the UN General Assembly on September 20, he accused Athens of allegedly drowning illegal migrants sailing from Turkey, and the world community called for peace in the region to recognize the Turkish Republic of Northern Cyprus as soon as possible, so far recognized only by Turkey itself. .

However, the increased American presence makes it difficult to put pressure on Greece by force: yes, Turkey's own military potential is noticeably greater (at least on paper) - but Uncle Sam himself now fits in with the opponent, and it is scary to oppose him. Against such a background, the continuation of bellicose rhetoric would put Erdogan in a stupid position, and he understands this.

The bravest of the Armenians - Blinken

Moreover, an unexpected problem also appeared on the eastern flank - there the star-striped "uncle" also indicated his presence, and at several points at once.

It seems that Nancy Pelosi's visits are becoming a kind of indicator of American interest in a particular region. On September 17, against the backdrop of another Armenian-Azerbaijani aggravation, she arrived in Yerevan, where she not only talked with Pashinyan about leaving the CSTO, but also condemned the Azerbaijani aggression from the rostrum. And literally the day before, while at the SCO summit, Erdogan rather boastfully stated that Azerbaijani President Aliyev almost reported to him about the success of the military operation.

And it would be fine if the matter was limited to Yerevan - but on September 19, the US Secretary of State called both the Armenian and Azerbaijani ambassadors to Washington “on the carpet”. Obviously, Blinken strongly persuaded the parties to a peaceful settlement (in a way that would suit the Americans).

If the next “Pelosi flight” was just another click, then this is already an alarming bell. It is quite possible to expect that in the near future some high American rank will pay a visit already to Baku, after which Azerbaijan may more or less abruptly cease to be a Turkish protégé: the “Turkic world” is the Turkic world, but the course is still determined by personal (selfish and greedy) interests of specific bais. Can Aliyev turn to Turkey in the same place as Tokayev to Russia? - Yes, easily, and Erdogan will just as little be able to oppose this.

Apparently, Washington decided that the “multi-vector sultan” played too much and imagined himself superfluous: he doesn’t let the Scandinavians into NATO, he definitely doesn’t stand up against Russia, he climbs without demand not only into the Ukrainian conflict, but also into Europe, trying to spread influence in the Balkans. It seems very likely that in the near future they will try to remove Erdogan in some way.

But, in fact, the choice of method will show whether the Americans want to get rid of only Erdogan or the whole of Turkey as part of a general reformatting of NATO. A “soft” option is possible with another attempt at a military coup, as in 2015, but there are also opportunities for the country to slide into a full-fledged civil war. Quite “by the way,” civil unrest broke out in neighboring Iran, which, among other things, has a national – Kurdish – basis. With the appropriate information pumping, the national liberation and anti-clerical fire can spread to the Turkish part of Kurdistan.

The most curious thing is how Erdogan himself will react to the growing American pressure, being the direct point of application of this pressure. On the one hand, repentance and an unconditional return to the fairway seems to be the simplest way out of the situation - but such a maneuver does not give absolutely no guarantees, especially the personal safety of the Sultan. In addition, the rejection of the pan-Turkic project will seriously affect its popularity among the people and in the international arena.

Therefore, there is a non-zero probability that the American multi-move will have the opposite effect and push Erdogan and Turkey closer to the SCO. Of course, Ankara's relations with many members of the Shanghai Organization (including Russia and Iran) are very doubtful, but the global crisis willy-nilly inclines the SCO members to closer cooperation.
Reporterin Yandex News
Reporterin Yandex Zen
5 comments
Information
Dear reader, to leave comments on the publication, you must sign in.