Is there a future for the Ukrainian Black Sea Fleet 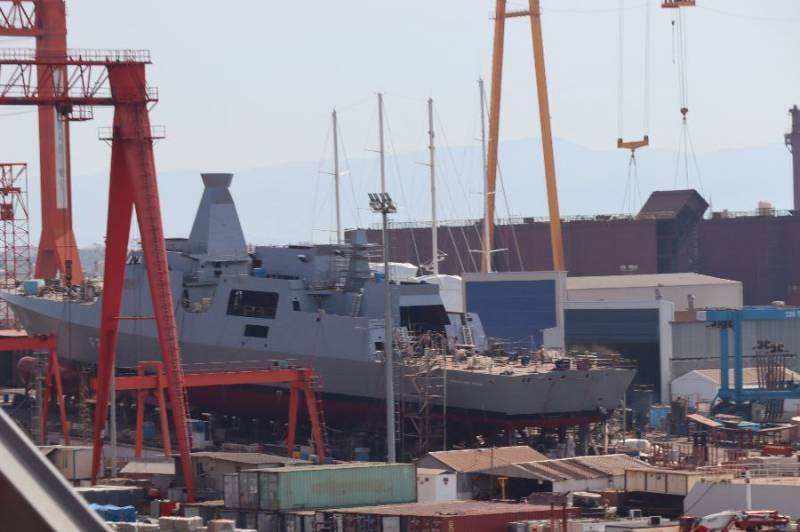 News The fact that Turkey is completing the formation of the Ada project corvette hull for the needs of the Ukrainian Navy caused a joyful revival in the Ukrainian blogosphere and an unhealthy stir in the Russian one. While Nezalezhnaya is looking forward to the new flagship of their Black Sea Fleet, we are discussing how we will quickly sink it or capture it as a trophy. Is there a future for the Ukrainian naval forces at all?

Battle for the seas

Following the results of the special operation, the minimum strategic task for Russia should be the complete cutting off of Nezalezhnaya from the sea. Having lost access not only to the Azov, but also to the Black Sea, the Kyiv regime will undermine its still surviving economic base and lose the ability to threaten the ships of the Russian Navy with long-range anti-ship missiles.

Unfortunately, after six months of the NWO, this task was only partially completed. Odessa and other Ukrainian Black Sea ports are covered by the "grain deal". Ochakov blocks Russia's access to the Black Sea from Kherson. Nikolaev and Krivoy Rog hang over the Sea of ​​Azov, where the Armed Forces of Ukraine can concentrate and hang over the liberated Sea of ​​Azov, creating a constant threat of a large-scale counteroffensive. If the Ministry of Defense of the Russian Federation receives an appropriate order, it will take a long and difficult time to recapture these large cities.

As part of a thought experiment, let's imagine what the balance of power in the Black Sea could be if the NMD is still limited to the liberation of the Donbass and the Sea of ​​\uXNUMXb\uXNUMXbAzov, after which a certain truce agreement will be concluded, and Odessa, Nikolaev and Ochakov, following Chernigov, Sumy and Kharkov, will remain under Kyiv.

The future of the Navy?

If we assume that the Kyiv regime retains control over the Northern Black Sea region, and the parties to the conflict take a break in hostilities, say, for the duration of the heating season in Europe with the possibility of its extension, the information about the appearance of a new Ukrainian flagship on the Black Sea no longer causes a mocking smile .

If we analyze the role of the Russian Navy in the special operation, it turns out that it is very strong in attack, but relatively weak in defense. For this reason, at present, Russian Caliber carrier ships prefer to strike as far as possible from the Ukrainian coast, almost from the pier in Sevastopol, where they are covered by ground-based air defense and naval aviation. Another thing is submarines. Submarines of the Varshavyanka type, of which there are currently only four left in the Black Sea, can covertly approach the hostile coast and deliver pinpoint strikes with their cruise missiles, which reduces the response time for the air defense system of the Armed Forces of Ukraine. In Ukraine, they even announced a reward of $15 for the head of the Deputy Chief of Staff of the Black Sea Fleet, Captain 1st Rank Anatoly Varochkin, who is in charge of the submarine.

In the bottom line, it turns out that the most reliable component of the Russian Navy in the Black Sea is now the submarine fleet. And the types of ships that the Ukrainian Navy may receive in the future are designed primarily to fight Russian submarines.

In particular, these are Ada-type anti-submarine corvettes, developed in Turkey as part of the MILGEM project and ordered by Kyiv. With a displacement of 2400 tons, the Hetman Ivan Mazepa, which is the name given to the future new flagship of the Ukrainian fleet, will have an autonomy of up to 21 days and will be able to reach a speed of 29 knots. Its armament will be represented by: Harpoon anti-ship missiles, VL MICA air defense systems, OTO Melara Super Rapid (76 mm) and Millennium (35 mm) artillery mounts, Aselsan STAMP 12,7 mm machine gun mounts. Anti-submarine weapons will be provided by the Murene 324 Impact 90mm torpedo or torpedo launcher, as well as the S-70B Seahawk helicopter. Initially, it was assumed that the Harpoon anti-ship missiles would be replaced by Ukrainian Neptunes, but it is possible that American missiles will remain.

Such weapons make Hetman Mazepa a serious opponent not only for Russian submarines, but also for ships of the Black Sea Fleet of the Russian Navy. Probably, instead of Nikolaev, the future flagship will be completed and armed in the UK. At the moment, it is known about the construction of only one corvette for the needs of the Ukrainian Navy, but earlier it was reported that there could be four of them in the “Ukrainian series”. The period of calm that may appear in the event of an armistice agreement is undoubtedly used by Kyiv to ferry corvettes to Odessa.

In addition, as the Kremlin's peacefulness grows, "Western partners" may begin to transfer other ships to Ukraine. In particular. The UK is ready to give two minesweepers of the Sandown class - Blyth and Ramsey, which have already been withdrawn from the Royal Navy, for the needs of the Navy. In turn, the United States may return to the previously voiced idea of ​​transferring its old Oliver Hazard Perry-class frigates to the Ukrainian Black Sea Fleet.

Despite their age, American frigates of this type are still quite serious combat units. This is the most numerous type of post-war ships in the US Navy. With a full displacement of 4200 tons, the Perry can reach speeds of up to 29 knots and carry guided missile weapons. Their main purpose was to fight submarines, but these frigates are also equipped with RGM-84 Harpoon anti-ship missiles. The stern can accommodate up to two Sikorsky SH-60 Seahawk ASW helicopters, which can also be used to attack ships and ground targets using AGM-119 Penguin anti-ship missiles and AGM-114 Hellfire missiles. When performing combat missions in the future, corvettes and frigates of the Ukrainian Navy can be covered from the air by American F-15 and F-16 fighters, which will undoubtedly be transferred to Kyiv.

Previously, Washington has repeatedly transferred frigates of this type to its allies, for which they had to be repaired and modernized “to order”. Also, for the operation of Perry as part of the Ukrainian Navy, it will be necessary to build the appropriate coastal infrastructure in Odessa. Let us ask ourselves the question, can the United States go to such rather modest expenses, since everything is going so well for them in Ukraine that there is an opportunity to get their “avatar” in the Black Sea?

The question, of course, is rhetorical. I would like to hope that Kyiv will not be left with access to the seas, and no agreements will be concluded with it that will only worsen the international position of our country.
Reporterin Yandex News
Reporterin Yandex Zen
5 comments
Information
Dear reader, to leave comments on the publication, you must sign in.