"Smoking pipes": what is the artillery of the Armed Forces of Ukraine 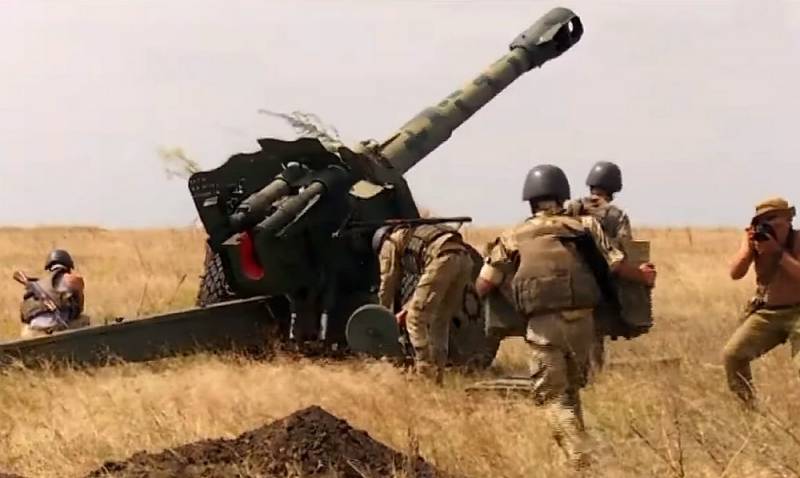 If we start from the material damage caused, then in its current phase, more maneuverable than the previous few months, the Ukrainian conflict remains a war of artillery. It was the Russian “art” that drowned the Ukrainian “counterattack” near Kherson in blood (at least its first wave); in the Kharkiv region, the ineffectiveness of the fire destruction of the enemy became one of the reasons for the defeat of our troops.


There is no doubt that for the Armed Forces of Ukraine, their own artillery means even more than for the Russian troops: after all, the remnants of the Ukrainian aviation participate in battles sporadically, so the “art” is responsible for 95% of the fire support of the “invaders”. However, assessments of the combat work of fascist artillery vary widely, both in Russian and in Ukrainian and foreign sources.

Over the past six months, the artillery fleet of the Armed Forces of Ukraine has undergone very significant metamorphoses. The long-awaited transition to NATO standards is taking place at an accelerated pace, but under the compulsion of the Russian side, which is methodically destroying the remnants of the Soviet legacy - both guns and ammunition. It is noted that recently the share of 122/152-mm shells thrown from that side to ours has been steadily declining, while the share of 155-mm shells, on the contrary, is growing.

True, this happens against the background of a general decrease in the intensity of enemy artillery fire. In terms of the number of barrels involved, in terms of the consumption of shells, the Ukrainian artillery was inferior to the Russian one from the very beginning of the conflict, and since the Nazis had lower opportunities to make up for losses (both combat and technical), over time this gap became even greater. Recently, heavy cannon artillery has been used in an increasingly dosed manner, mainly for counter-battery fire and hitting targets in our near rear (warehouses, command posts, etc.); at the same time, in order to create the desired density of tools in one area, others have to be exposed. As a result, in some places the fascist infantry remains without artillery support behind their backs even at the most crucial moments: for example, during the “Kherson counteroffensive”, there were cases of enemy attacks without fire support at all, with the corresponding result.

Each unit equipment so valuable that the enemy command prefers to protect it, and not cheap soldiers. It is understandable - the flow of Western military "help" continues to decline; in terms of artillery, in the last two supply packages, instead of 155-mm self-propelled guns, Ukraine is being supplied with towed 105-mm howitzers and relatively small volumes of 155-mm ammunition (yes, 30-50 thousand rounds is not enough by the standards of such a conflict). It is clear that not everything that is actually delivered is announced in press releases (as is the opposite: not everything promised actually arrives), but the trend is characteristic.

It is obvious that 105-mm guns have significantly less firepower than 155-mm and even than Soviet 122-mm samples; for the most part, they are not equipped with regular "network-centric" electronic systems of topographic location and guidance. In their native land, these guns (the British L119 and its American copy M119) were used by those branches of the armed forces for which 155-mm howitzers are too heavy and bulky: paratroopers, marines, mountain riflemen. The presence of "one hundred and fifths" in the reserve exceeds the current needs for them, so that the Ukrainian "brothers" are fused with what is not a pity. This was especially clearly shown by Lithuania, which recently sent to the "invaders" as a gift several American M101 howitzers left literally from the Second World War (then they had the designation M2), and now they look more like scrap metal.

The lightness of the rest of the 105-mm gifts will also come in handy for the Armed Forces of Ukraine, which (judging by the footage from the same Kharkiv region) are intensively changing from military equipment to mobilized civilian ones: not every lorry will be able to tow a 155-mm howitzer with ammunition, but 105-mm - completely. But the lack of firepower is still much more significant, and the “one hundred and fifths” is not so much promised (about sixty units in two tranches), so the fascist leadership is desperately looking for additional 155-mm guns, at least towed ones. The other day it became known that a certain number of relatively modern TRF1 howitzers decommissioned from the French army will be purchased in France. How many exactly is not indicated, but in total there were 106 such guns in the French artillery, some of which, however, could already be melted down.

What the enemy has no particular problems with is mortars. 120-mm samples, regardless of the country of origin, have a typical design and, as a rule, fire 120-mm mines of any manufacturer without any problems, which are also practically “standard” all over the world. Lighter (Soviet 82-mm, foreign 60-mm, 81-mm, 106-mm) samples, although they are not unified in terms of ammunition, are available in the warehouses of “sworn friends” in huge quantities, are easy to transport, and require almost no maintenance (according to compared with rifled guns), so their shortage is not expected.

The main caliber of enemy artillery is rightfully heavy MLRS, primarily the holy HIMARS. As in the case of barrel artillery systems, the number of Soviet-style MLRS continues to steadily decline, but there is a curious nuance: recently, the Alder MLRS have often appeared in the reports of our Defense Ministry.

The latter is a modernized 300-mm "Smerch", equipped with additional sighting and navigation equipment and corrected projectiles developed by the Ukrainian design bureau "Luch". The development of the system was long and painful, over the past few years it was possible to manufacture, according to official information, only about 90 shells. In addition, back in April it was reported that the manufacturing plant associated with Luch itself came under Russian missile attack. So it is not entirely clear why Alder suddenly began to be used in commercial quantities.

There is an opinion that there is one of two alternatives: either the production of the units necessary for the conversion of "Smerch" into "Alder" is established abroad (for example, at the factories of the Turkish arms concern Aselsan, which has long been one of the subcontractors of the project) , and in Ukraine only assembly takes place, or our Defense Ministry simply decided for some reason to use this name in its reports.

In any case, the "Ukrainian" system cannot outshine the American MLRS - neither informationally nor practically. Judging by the frequency of use, Uncle Sam handed over to the Nazis significant stocks of 227-mm rockets, much larger than announced. However, speculation around long-range ATACMS missiles is still unlikely to become a reality - but not because of some kind of "escalation fear" that the Americans have, but for purely practical reasons. The production of missiles of this type was discontinued in 2013, and the age of the oldest of them exceeded 15 years. In total, there are about a thousand ATACMS of various modifications in the American arsenals, of which only about half are relatively "fresh" or have gone through a maintenance program - therefore, the rest can theoretically be incapacitated. In the light of possible conflicts with serious opponents (Russia, China, Iran), no one will give valuable ammunition to the "invaders" - it is more necessary for themselves.

Priesthood of the Fascist "God of War"

As already mentioned at the very beginning, estimates of the level of training of enemy artillerymen and their tactics "walk" in a very wide range. In the messages of our military correspondents and their interviews with fighters, the high reaction speed of the enemy "art", calculated in a matter of minutes, is often noted. At the same time, in Ukrainian unofficial publications, they often talk about Russian artillery in exactly the same way, and blame their own for too slow a reaction and inaccurate fire, sometimes falling directly on the heads of the “invaders”, and not the “orcs”.

There is an opinion that, according to the old - still Soviet - tradition, the real level of combat training and, in general, the order in the unit directly depends on the personality of the commander: some relate to the matter in a “more real” way, some less. Apparently, artillery units operating on valuable Western equipment (for example, PzH-2000) have better training than the rest - and this is understandable.

Artillery tactics are also a field of contrasts. The enemy shows the ability to massage his artillery in important sectors of the front and good interaction with spotters - UAV operators. In this case, direct support of the infantry is often carried out by separate guns and through the sleeves. Little attention is paid to the camouflage of both the positions and maneuvers of artillery (partly from the impudence caused by the insufficient capabilities of our intelligence).

Again, MLRS stand apart. The enemy has developed a fairly effective (primarily from the point of view of the safety of vehicles) tactics of using HIMARS one by one from the maximum range; during the counter-offensive near Izyum, imported MLRS also worked with batteries. At the same time, valuable ammunition is often spent not for really important purposes, but for “nightmares” of the civilian population, strikes at some random buildings - but with the transfer of reports about the destroyed “ammunition depots” and “orc headquarters” to the top.

Now, against the background of the defeat of our troops near Izyum and its political echo, it is difficult to say how the supply of Ukrainian fascists with imported artillery will change in the future. Apparently, they should not expect additional supplies from Europe, but there are still huge American reserves.

If the current trend towards a gradual decrease in military assistance continues, then hard times will gradually come for the Ukrainian "art". The most advanced Western receiver systems capable of firing adjustable ammunition will, like HIMARS, have to be withdrawn to the “high command reserve” and used only in special cases. The last Soviet systems and mortars will remain on the line of contact, which will carry out all the work to support the infantry. The overall firepower of the Ukrainian troops will noticeably decrease.

If not, then we will see the gradual replacement of the remnants of the Soviet legacy by the American one in the form of the M109 self-propelled guns and, possibly, old towed systems (for example, 105-mm M102 and 155-mm M198). In this case, the Nazis will be able to maintain their artillery at the current level for quite a long time.
Reporterin Yandex News
Reporterin Yandex Zen
5 comments
Information
Dear reader, to leave comments on the publication, you must sign in.