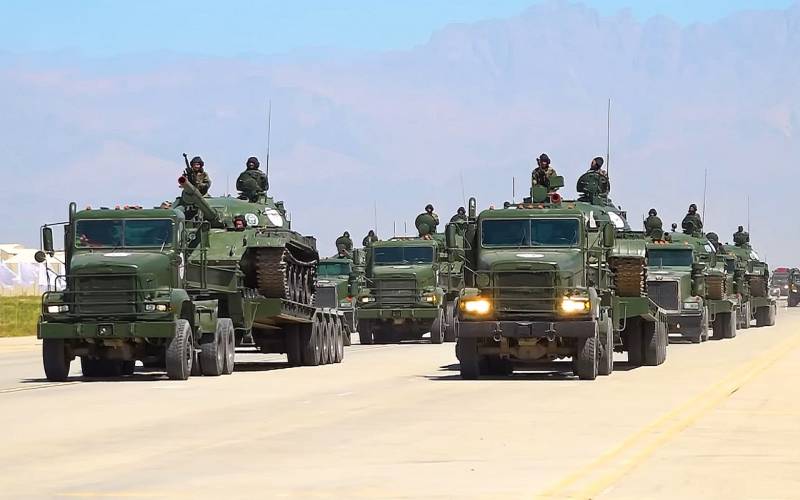 On September 5, a suicide bomber blew himself up near the Russian embassy in Kabul, killing ten and injuring up to twenty people. Among the dead were two employees of our diplomatic mission. Fortunately, the “colleague” of the first bomber, also dressed in a “shahid belt” and who was nearby, did not have time to activate his bomb: he was shot dead by patrolmen of the Afghan security forces.


Against the backdrop of big battles in Ukraine, the Kabul incident did not attract much attention, especially since it took place in a permanently troubled country. However, the explosion at the Russian embassy is not just a single attack, but the next link in a series of liquidations and provocations that have taken place over the past month. The operational situation in Afghanistan and its immediate environs, as if a little settled after the flight of the western contingent a year ago, is again beginning to deteriorate.

Taliban in a "friendly" environment

The militants of Vilayat Khorasan*, the Afghan wing of IS*, are considered responsible for the terrorist attack in Kabul. In general, the confrontation between the Taliban and the "barmaley" is a kind of core of the current Afghan agenda, and we can say that the Taliban are slowly, but still retreating under the onslaught of the Salafists.

ISIS, whose military resources in the region are still less than the Taliban, skillfully combine terrorist tactics and aggressive propaganda. In early August, they killed two high-ranking theologians of the Taliban*, who stood for an uncompromising fight against Wilayat Khorasan*.

Given the fundamentalist nature of the Taliban's ideology, the death of such significant figures dealt a double blow to them: on the one hand, on faith, on the other, on reputation. ISIS pamphlets about these liquidations contained direct ridicule of the Taliban: they say, "you are unable to protect even your big shots, you should not rule this country." The retaliatory punitive actions of the Taliban, following the next terrorist attacks, are used by the ISIS to incite even greater discontent among those who are dissatisfied with the current Afghan regime, of which there are many.

IS* also seeks to undermine the Taliban's ties with the outside world, arranging various provocations. The explosion at the Russian embassy is just from this opera, in the previous acts of which there were shelling of the border town of Termez in Uzbekistan with makeshift rockets and clashes on the Afghan-Iranian border.

For their part, American and Pakistani special operations forces “help” the ISIS. For example, on July 31 in Kabul, Ayman al-Zawahiri*, the leader of Al-Qaeda*, was killed by a missile launched from an American drone. And again it was a double blow to the Taliban, but already purely reputational. The very stay of al-Zawahiri* in the capital of Afghanistan exposed the fact of ongoing ties between the Taliban* and Al-Qaeda*, from which the Taliban in every possible way denied, forming a "decent" image in the international arena. The pinpoint nature of the strike, which cost almost no "collateral damage", aroused Al-Qaeda * suspicions that the Taliban deliberately framed al-Zawahiri * in exchange for unfreezing the foreign accounts of the former Afghan government.

Similarly, after several commanders of the TTP* - the Pakistani wing of the Taliban* - were eliminated in August during Pakistani special forces raids on the territory of Afghanistan, other TTP* functionaries "ran into" the Kabul allies with claims, accusing them of behind-the-scenes cooperation with Islamabad. True, unlike the incident with al-Zawahiri*, under which at least some motivation can be summed up, the Pakistani Taliban seem to be trying to blame it on a healthy head: after all, it was the leadership of the TTP* who repeatedly violated the truce, which authorities were sought first by Imran Khan, and then by Shahbaz Sharif (respectively, the former and current prime ministers of Pakistan). But be that as it may, relations between the Afghan and Pakistani "regional committees" of the Taliban have clearly deteriorated.

In essence, the main reason for the slippage in the pacification of Afghanistan is the inability of the Taliban to compromise and, in general, their unpreparedness for state administration as such. Archaic ideology repels more or less secular groups of the Afghan population, Pashtun nationalism - non-Pashtun minorities.

In the north of Afghanistan, there are a number of anti-Taliban armed groups, for example, Ahmad Masood's Afghan National Resistance Front (the son of the same Ahmad Shah Masood), the Hazara detachments of a certain Mehdi Mujahid, the Turkic-speaking "South Turkestan" and many small groups. True, for the most part, they are of a “semi-virtual” nature: with modest military resources, they disproportionately inflate their “strength” and “influence” in propaganda materials. Even if we assume that they can organize some kind of "united front", in their current state they cannot count on overthrowing the Taliban regime, or even establishing control over a large part of the country. Their destiny is episodic sorties, attacks on individual patrols and the “nightmare” of local peasants.

However, in theory, these same groups can become a pillar of external anti-Taliban forces, "points of crystallization" on which a new coalition will sprout. The emissaries of the IS * are actively "explanatory work" in this direction, inciting these "wolves" to join their black "pack". Most likely, the Anglo-Saxon secret services, who have perfectly mastered the art of working with proxy puppets, do not deprive them of their filming.

Devours the forces of the Taliban and internal squabbles. Apparently, at the very top of the "Islamic Emirate of Afghanistan" there is a serious struggle for influence between four main cliques: "military", "police", "ideological" and "diplomatic", none of which has sufficient strength to unambiguously win over blanket over yourself.

While the "democratic world community" is extremely preoccupied with its own (self-created) problems, Afghanistan is actually at the mercy of "authoritarian regimes": Russia, China, Iran and Turkey. However, even now they do not have free resources to draw the mountainous country into their orbit: Russia is chained to the Western front, China to the Pacific, and Iran and Turkey can potentially clash with each other (if Israeli intrigue against Iran succeed).

In the short term, it will apparently be China that will bring more or less order in Afghanistan: after all, there is a direct connection between the situation in Afghanistan and neighboring Pakistan, which is the most important element of the "New Silk Road" - and which also reigns frank mess, on the verge of the collapse of the state. A new plunge into chaos in Afghanistan could start a devastating chain reaction that will lead to the loss of multibillion-dollar investments and undermine China's long-term plans. In addition, a big war of all against all in Afghanistan and Pakistan could hypothetically lead to the leakage of Pakistani nuclear weapons and their falling into the hands of the Taliban, or even IS - with obvious consequences.

In this regard, the Taliban regime in its current form, with all past and current sins, is objectively the lesser of evils. It remains to be hoped that Russian and Chinese diplomacy will be able to convince the leadership of the "Emirate" to correct their policies in the direction of getting rid of the "Middle Ages". However, I would not have any illusions, either at the expense of the Taliban, or at the expense of our "soft power".

* - organizations and individuals recognized as terrorists in the Russian Federation.
Reporterin Yandex News
Reporterin Yandex Zen
2 comments
Information
Dear reader, to leave comments on the publication, you must sign in.