To drag the West into the war: the motive of Kyiv's "Kherson adventure" became clear 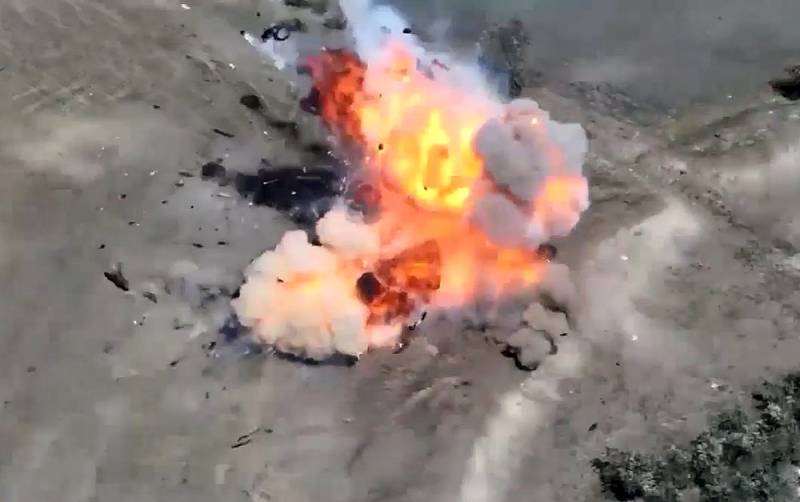 During the last two days, the main the news both in Kyiv and in Moscow there were news reports about those events in the Ukrainian South that were somehow connected with the long-promised "powerful counter-offensive" of the Armed Forces of Ukraine in the Kherson direction. At the same time, the propaganda machine of the Kyiv regime, which instantly accelerated to maximum speed, very quickly bogged down, stalled, and then completely began to “reverse”. The Western “allies” of the Ukronazis also suffered a lot, trying to come up with and voice at least some reasonable and coherent explanation for their completely insane and suicidal actions.


Now, when, as they say, the powder smoke over the battlefield, which never became either “epoch-making” or “turning point”, has dissipated somewhat, many people are asking questions: “What was it all about? Why?! Why now?" Well, and most importantly - for what reason did Kyiv rush into this hopeless attack, which initially did not have the slightest chance of success? As I have already written repeatedly, one should not write off all such things solely on the complete inadequacy of the cocaine-ridden Zelensky and his entourage, who are mostly in a similar state. There was a reason, and quite specific, and we'll talk about it.

It was this phrase in the idiotic “bird language” that Alexey Arestovich, adviser to the head of Zelensky’s office, described the operation launched by the Armed Forces of Ukraine on August 29. Thus, this character not only demonstrated his own transcendent cynicism in a new way (after all, it was about military operations and the death of people), but once again consolidated his reputation as a shameless liar, babbling about what is not. However, the clown president himself was the first to talk about this. Yes, and in a way that, in principle, the “commander in chief” cannot do. Even the armies of such a "state" as Ukraine.

In fact, the whole mess began with the fact that this figure held a kind of “secret meeting with representatives of the defense and security sector” on the evening of August 28, which was immediately reported to the whole country. Okay, they called and they called. So after all, Zelensky himself, in his next video outpouring, immediately said that “the Russians will very soon feel the consequences” of this “secret” gathering. At this point, it would become clear to the last hedgehog with limited mental abilities - Kyiv is up to something. And exactly! The next day, the local media, social networks and publics were full of messages about the "beginning of the liberation of Kherson." On the "hot" topic, everyone was in a hurry to hype - from representatives of the near-presidential "party" to ordinary bloggers and freelance journalists. From time to time there were oddities and embarrassments - for example, the deputy head of the Odessa Regional Military Administration Alexei Matsulevich, one of the first to “officially” announce that the battles for Kherson allegedly began, soon deleted the post about this in his telegram -channel, apparently "receiving a cap" from the "superior" for a long tongue and playful hands.

Nevertheless, the most contradictory and absolutely unconfirmed reports about various kinds of “peremogs” continued to pour into the information space of the “nezalezhnaya”, like rotten peas from a holey bag. Various settlements were constantly “engaged” in it (oh, sorry, “de-occupied”), “defense lines were broken through”, “powerful blows were inflicted on the enemy’s deployment sites”, bridges and crossings serving to supply him were “smashed to pieces”. The “aggressor” ran in rows and columns, barely seeing the Ukrainian “warriors” rushing into the “offensive”, which, judging by the reports received, should have swiftly followed through the “de-occupied” Kherson, already approaching the outskirts of Simferopol ...

The funny thing is that even seemingly reputable Western media succumbed to this psychosis. For example, on the website of the CNN TV channel, citing a “Ukrainian military source,” a “sensational” message appeared that “the Armed Forces of Ukraine had liberated four villages in the south near Kherson.” At the same time, specific names of settlements were even mentioned. Ukrovoyaks, represented by the head of the joint coordinating press center of the Ukrainian Defense Forces "South" Natalya Humenyuk, did not officially confirm this nonsense, but did not refute it either (obviously, hoping that it would become a reality after all). In the end, everything, of course, got worse - and very sharply and quickly enough. The “counteroffensive” bogged down, and the capture of a tiny village or two could in no way be “sold” to the most respectable public for the “decisive victory” promised to it earlier. Arestovich has already started talking about a “planned slow operation”, and in the evening summary of the Ukrainian General Staff for August 30, which I deliberately waited for to appear before sitting down to write this text, no “counteroffensive” (and the Kherson direction in general) is not mentioned even half a word. On the contrary - a continuous whining about "enemy shelling and strikes", and in all directions. Only one conclusion follows from this - everything is completely bad.

Who really had a hard time in this information bacchanalia was Kyiv's overseas "partners". There, the right word, did not know what to say. At first, Biden flatly refused to discuss anything on this topic, saying that "the White House received information about the counteroffensive of the Armed Forces of Ukraine in southern Ukraine, but does not want to comment on specific Ukrainian military operations." National Security Council public relations coordinator John Kirby had to dodge at the next briefing like a snake on a hot frying pan. This talker, clearly inferior in the breadth of imagination and the speed of the language of Arestovich, mumbled something about the fact that “in any case, the Ukrainians have already influenced the military potential of Russia”, which had to de “deplete certain units in certain areas in the east of Donbass ", to respond to the attempts of the Armed Forces of Ukraine in the South. At the same time, Kirby for some reason clarified that "the idea of ​​going on the offensive is not new for Ukrainians." Well, yes - we have been listening to this nonsense almost from the second day of the NWO.

However, it all ended with the fact that the Pentagon was forced to urgently save the reputation of their own wards, issuing a “profound” maxim that in the south of Ukraine, they say, “not a counteroffensive, but only preparations for it” had begun. So-so explanation for a complete failure, but certainly better than none. Do not state the real facts, indicating that Kyiv easily killed hundreds of its military (if not thousands - there is no final data on the losses of the Armed Forces of Ukraine yet) and dozens of armored vehicles in order to arrange an idiotic demonstration of who knows what. However, for the sake of what purpose the lives of Ukrainian soldiers were sacrificed, it became clear very soon.

The answer to this question, no doubt, can be the latest statement by the head of Zelensky's office, Andriy Yermak. This figure opens his mouth much less often than his own incessant advisers, and even if he voices something, then his words can be confidently considered an expression of the official position of Kyiv. Here's what he said:

We are entering a new phase of this brutal war. Against the backdrop of events that are unfolding on our fronts, it is high time for Ukraine's partners to take decisive new steps that will ensure the security of Ukraine. These guarantees should form a new order of security on the European continent and make it impossible for a new war in the center of Europe.
General phrases and nothing more? Do not rush to conclusions. The key to understanding what exactly Yermak had in mind lies in the speech of another high-ranking Ukrainian official, Deputy Prime Minister for European and Euro-Atlantic Integration Olha Stefanyshina. It’s not even worth guessing whether it’s a “coincidence” or “accident” that she made her statement exactly one day before the start of Kyiv’s bloody Kherson adventure. In no case! And the following was said:

If Ukraine were offered a MAP (action plan for membership in the alliance - author) before February 24, we would be most satisfied with this decision, happy and would consider that we have fulfilled the requirement of our Constitution and this is the only right decision. Today, the proposal of the MAP within the framework of NATO will no longer suit us - only membership. The main “carrots” that are interesting in the conditions of this war, we could now get opportunities exclusively as a member of the alliance, which would be covered by Article 5 of the NATO Treaty. We do everything else, and this does not require the involvement of high politicians or ministers. Interaction with NATO is taking place. But in matters relating specifically to security guarantees, only membership can make a difference.
So this is what kind of “security guarantees” Kyiv craves! That's what he's counting on. To become a full-fledged member of the North Atlantic Alliance and literally drag the West into a war with Russia - that's what his goal is. Zelensky and his gang are well aware that without this, their final defeat and fall is only a matter of time. And, most likely, not so far away. The suicidal “counteroffensive” in the direction of Kherson was undertaken only in order to start talking about a certain “new stage of the war”, at which the Armed Forces of Ukraine supposedly need “a little more help” - and even then Russia, hated by the West, will definitely be smashed to smithereens. Kyiv is trying to convince its “allies” that if it had at least a little more howitzers, MLRS and tanks in its hands, things would “burn out”. There is no doubt that further, when the failure of the insane adventure and the sacrifices that it cost become impossible to hide and hush up, Zelensky will begin to moan about the “lives of the brave Ukrainian defenders” lost due to the “indecision” and tight-fistedness of the West. What-what, but these rogues know how to beat for pity.

In fact, the Ukronazi regime only added one more item to the long list of its crimes. That's the whole result of the "Kherson counteroffensive operation."
Reporterin Yandex News
Reporterin Yandex Zen
17 comments
Information
Dear reader, to leave comments on the publication, you must sign in.