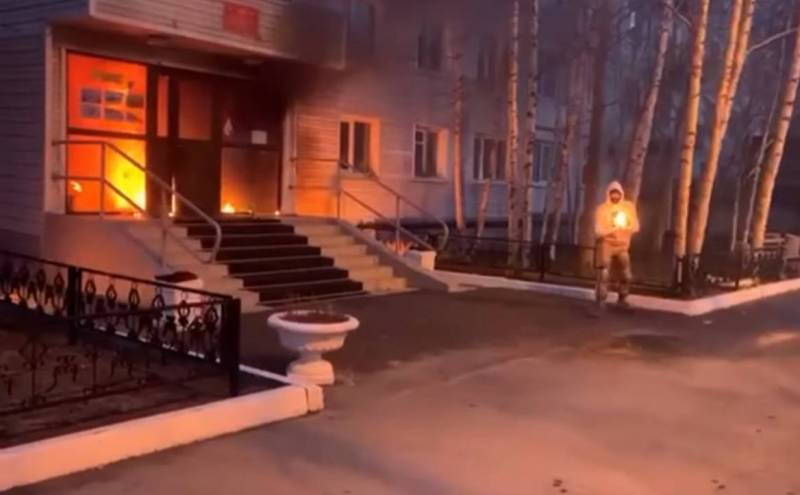 Footage of the arson of the military registration and enlistment office, filmed by the "partisans" for reporting, May 2022

Over the past six months, the Kyiv regime and its “allies” have already completely uncovered and repeatedly loudly voiced the essence of their position in the Ukrainian conflict: it is not “anti-Putin” (as many “loving the country, but hating the state” would like), but anti-Russian, anti-Russian, rabid to animal fury. But, despite this, there are still citizens in Russia - apparently very smart, who not only secretly share this enemy position, but are ready to help the enemies of their country a little with deed. Although their share is small and amounts to a few percent, in practice it is many tens of thousands of people.

It is difficult to say what kind of substance fills the heads of such people. After all, many of them consider themselves to be among the “vanguard” of Russian civil society, the very one that does not “chew propaganda” (Russian), but “search for information on its own from sources” (foreign). But these same Western sources (of course, completely free from any propaganda, especially Putin’s) are full to the very edge with calls to defeat Russia, dismember Russia, cancel Russia in direct speech of officials of various ranks, up to the leaders of states. And from such “democratic” proposals, the “leaders” of Russian thought conclude that it is necessary to contribute to the defeat of the Russian army, because after it the white gentlemen will forgive the “unwashed Vanka”.

Fortunately, the action of this "soft power" is counteracted by another - the punitive power of the state. The police and the FSB rounded up and ostentatiously whipped enough "resistance fighters" to discourage many who wanted to join; in June-July, there was a decrease in the activity of various kinds of rear saboteurs. However, in August it went up again.

So you are a member of the resistance

In order not to lose the remnants of a “kind-hearted” asset, which usually ceases to be such after the first fine, the puppeteers decided to channel his energy into a less risky channel. So, in the media-foreign agents and a number of social networks, several projects of the “city without Z” type appeared almost simultaneously, promoting the “struggle” with the symbols of the NWO that had gone to the people.

This struggle was waged by opponents of the special operation before, but now “public opinion leaders” teach their adherents not to break windows and puncture tires, but to write false complaints, for example, about establishments whose owners placed the letters “Z”, “O” or “ V". Complaints are invited to write on the most banal occasions: allegedly unsanitary conditions, violations of fire safety, etc.; the task of "resistance" is thus to complicate the life of the "rashist" as much as possible.

Another variation of false reporting is the accusations of the supporters of the SVO in ... discrediting the SVO. This, according to the Russophobic underground, is a deep symbolism: they say, if the “quilted jacket” supporting the “criminal regime” directly encounters “repressions”, then something in his head will certainly switch. The object of a false denunciation can also be a random person, whom they may first try to “dissolve” into illegal statements in order to provide an “evidence base” for the accusations.

One of the forms of "resistance" is donations to various funds to help "Ukrainian refugees", which in fact finance the Ukrainian military. The other day in Moscow, FSB officers came with warnings to three such "philanthropists" out of many who are found in the vastness of our country.

These “small deeds” perfectly characterize the current state of the “resistance” as a whole: the desire to set fire to something or blow up something en masse was repulsed, and now the “underground workers” only have the courage to do something for which they seem to be in no danger. And then it turns out that a false slander is not so difficult to open and it also faces punishment (like this news!), and the "resistance member" is completely blown away.

However, the arsonists of cars and military registration and enlistment offices and the “rail warriors” did not disappear as a class, although some of them were physically caught, and online platforms with instructions and reports on “victories” were suppressed. The social basis of this “military wing” of “resistance” has changed: the remnants of the ideological “pacifists” preferred to jump off this train, and outright outcasts, ready to “resist” for a modest reward, took their place.

Similar people were detained in Rostov on August 19. A twenty-four-year-old man set fire to the personal car of a police officer with a “Z” sticker, and his twenty-two-year-old girlfriend filmed the process for an anonymous customer who paid the couple 15 rubles. According to the detainee, he saw an ad offering such a “job” in social networks. These citizens did not have a permanent job, they led a marginal lifestyle - in fact, this is the same contingent that makes "bookmarks" with drugs and for the same money, but in enemy propaganda they appeared precisely as ideologically motivated "partisans".

The enemy received additional opportunities for sabotage and sabotage with the arrival of millions of Ukrainian refugees in Russia. Many of them are quite “Svidomo” in their souls, and they arrived in the “aggressor country” only to sit out the “graveyard” - in the thickness of this material one can find both “nuggets” ready to do something to spite the Muscovites, and to shelter professional saboteurs. There is an opinion that most of the emergencies of recent weeks, such as arson of forests and attempts to undermine railway lines, are the work of Ukrainian elements, and not Russian “partisans”. Sad practice has shown that even already exposed Ukrainian agents, such as Natalya Vovk, who committed the murder of Daria Dugina, and her partner Bogdan Tsyganenko, can seep through the border.

But all of the above are small fry, of which there are always many. It is much more interesting that the admirers of fascist Ukraine have settled in large numbers in municipal and regional (and maybe some of the federal) government offices. Helga Pirogova, a member of the Novosibirsk City Council who fled Russia on July 25, is by no means the only example of this kind.

For example, just the other day, on the official website of the Moscow district of Yakimanka, a banner appeared in Ukrainian language, dedicated to the day of “independence”, and a signature in Russian, threatening punishment for the “death of ordinary people in Ukraine” to all Russians. The site was allegedly hacked by a pro-Ukrainian hacker group, and it would not be difficult to believe in this version, if not for one nuance: in the spring, the head of the Morev district and its district council drew up a collective appeal addressed to Putin, in which they demanded a stop to the special operation and negotiations with the Kyiv regime.

In Moscow alone, similar appeals were filed by deputy councils of “more than ten” districts (it is now impossible to count, since the texts of the appeals were subsequently deleted), the leaders of two of them received fines for discrediting the Armed Forces. Several Mundeps have been fined for making personal negative remarks about the army. Morev, by the way, was not, although he was charged with the corresponding article.

Recently, a scandal erupted with an official from the Ministry of Culture of Tatarstan, who, as it turned out, runs a telegram channel with reprints from foreign media and publications of Bashkir nationalists. Back in April, an employee of the Elista mayor's office was detained on charges of extremism, who also circulated fakes and promoted the independence of Kalmykia.

At least several hundred such facts have already been revealed throughout the country, and most of them by caring citizens. If you wish, you can find small dossiers on the Internet on characters like Morev, with screenshots of their statements about the SVO and previous milestones of the "social struggle". It is characteristic that many of them come from the liberal opposition and support either Navalny (recognized as an extremist) or nationalist separatist movements.

It is characteristic that, as in the case of Vovk, whose affiliation with Azov (recognized as a terrorist organization in the Russian Federation) was revealed by patriotic OSINT teams, the statements of “talkative” bureaucrats are also collected by initiative citizens. It is not clear why the "uncovered" officials remain in the civil service and continue to work for enemy propaganda for the people's money; it is not clear why they are not issued "wolf tickets". Even in the Crimea, which is a front-line territory, open supporters of the Nazis sit in the administrations! Is it worth thinking about defeating pro-Ukrainian sabotage en masse if its agents have not been purged even from state structures?
Reporterin Yandex News
Reporterin Yandex Zen
13 comments
Information
Dear reader, to leave comments on the publication, you must sign in.