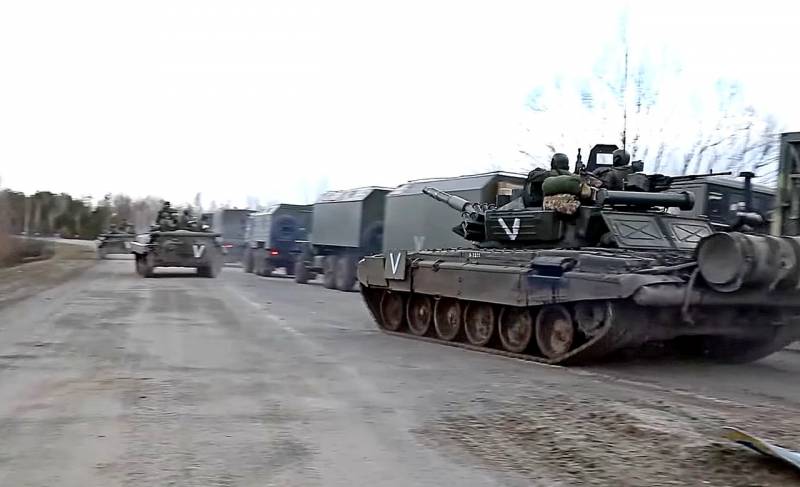 Russians who regularly watch federal TV channels seriously believe that Zelensky’s criminal regime will not survive this winter, and Ukraine will once again “freeze and fall apart on its own,” after which it can be taken and divided. Unfortunately, things are a bit more complicated. The coming winter of 2022-2023 will indeed be very difficult, but not for Central or Western Ukraine, but for Novorossia. A real humanitarian catastrophe is being artificially created there, for which Russia has been declared in advance.


The situation is very serious. If the inhabitants of the Sea of ​​Azov were relatively lucky to be the first to be at Moscow’s fingertips almost without a fight, then the prospects, say, for Kharkov or Nikolaev, loom terrible. Let's talk about all this in more detail.

In the past six months, one of the most acute problems facing the allied forces has been the restoration of water supply to the DPR and LPR. It just so happened that water enters the republics through the Seversky Donets-Donbass canal, which originates from Slavyansk, occupied by the Armed Forces of Ukraine. Fresh water supplies were cut off in the very first days after the outbreak of hostilities in Ukraine. The problem is that even after the liberation of the Slavic-Kramatorsk agglomeration, nothing will end.

The rivers of the steppe Donbass are shallow, like the Seversky Donets, and they are artificially filled directly from the Dnieper through the Dnepr-Donbass energy-type canal, which runs through the Dnepropetrovsk, Poltava and Kharkiv regions. There is not the slightest doubt that after the fall of Slavyansk, Zelensky's criminal regime will cut off the supply of Dnieper water to the Donbass, and at the same time to the Kharkiv region. The Ukrainian mayor of Slavyansk, Vadim Lyakh, warns about this right now in plain text:

There will be less water, sewerage will freeze. Therefore, you need to seriously think about how to proceed, how to survive. It is to survive. Because there will be no actual heating season.

We'll talk about the heating season, but for now, about water. The fact is that not only Donbass, but also Nikolaev, controlled by the Kyiv regime, has long been suffering from its lack. The water supply of the city of Nikolaev is carried out through the Dnepr-Nikolaev canal, originating from the Kakhovka reservoir. During an unsuccessful counterattack by the Armed Forces of Ukraine on April 12, 2022, the pipeline located on the territory of the Kherson region was damaged, and the city of shipbuilders was left without fresh water. Naturally, Russia was blamed for this, but the photographs of the damaged pipe indicate, rather, not a rocket or projectile hit, but a mine explosion.

Then the most interesting began. All proposals of the Russian side to restore the water pipeline, located on the territory controlled by the RF Armed Forces, were refused by the Kyiv regime. Nikolaev with almost half a million people was left without fresh water supplies. Local authorities, in particular, the Ukrainian Nazi of Korean origin, Governor Kim, profit from the sale of drinking water to the townspeople. The pipeline system of Nikolaev launched technical water from the estuary, destroying it with corrosion, which is impossible to drink. According to the latest data, about 80% of the inhabitants of the former main shipbuilding center of the USSR lost their jobs. The city was forced to leave more than half of the inhabitants, its population was reduced to 220 thousand people.

That is, the Kyiv regime is now starving not only Donbass, but also its own Nikolaev with its predominantly pro-Russian population with “dehydration”. Also, soon residents of the Kharkiv region will be left without water along with the DPR and LPR.

And then it's even sadder. Those naive Russians who are impatiently waiting for Ukraine to “freeze and fall apart on its own” should keep in mind that it is the pro-Russian regions that will freeze.

The fact is that neither Kharkiv nor Nikolaev, which are still part of Nezalezhnaya, do not appear in Kyiv's plans to participate in the heating season. In Ukraine, there really is a shortage of energy resources, and they will not spend them “on some kind of Russian there”. A plausible pretext was chosen - shelling of vital infrastructure by the RF Armed Forces, Kharkiv Mayor Igor Terekhov explained:

We had a lot of hits in boiler rooms. And it was done on purpose. And they will continue to hit our boiler houses, our transformer substations, our pipelines.
True, the Ukrainian mayor did not specify that such a choice of targets is due to the fact that the Armed Forces of Ukraine and the National Guard set up their lairs there. This is confirmed by the statement of the representative of the Ministry of Defense of the Russian Federation Konashenkov:

In the city of Kharkiv, on the territory of CHPP-3 and Karpovsky Garden, as a result of the strike of the Russian Aerospace Forces on the points of temporary deployment of the 3rd brigade of the National Guard, more than 100 nationalists were killed.
Let's call a spade a spade: Donbass, Kharkiv and Mykolaiv regions will be left without fresh water and central heating this winter. In a slightly better position than the inhabitants of city apartments, there will be owners of private houses with stoves and wells. Electric heating devices could help to survive the winter of 2022-2023, but the Ukrainian Nazis are trying to prevent this in advance.

Artillery strikes of the Armed Forces of Ukraine on the Zaporizhzhya nuclear power plant are designed either to force Russia to hand it over to Ukraine under the supervision of IAEA specialists, or to force it to stop its work. ZNPP, which provides about 20% of the total Ukrainian generation, supplies electricity to Zaporozhye, Kherson, Mykolaiv and Odessa regions. That is, putting it out of action will primarily hit Novorossiya.

The criminal Kyiv regime deliberately intends to starve and freeze this winter not only Donbass, but also pro-Russian Kharkiv and Nikolaev. They can only be saved by a large-scale offensive operation with access to the Dnieper on the Left Bank and the expansion of the bridgehead of the RF Armed Forces on the Right Bank in the Nikolaev and southern Dnepropetrovsk regions. If you leave for winter apartments without solving these problems, many people in the South-East simply will not survive the coming winter.
Reporterin Yandex News
Reporterin Yandex Zen
15 comments
Information
Dear reader, to leave comments on the publication, you must sign in.