The West declares a war of attrition and destruction on Russia 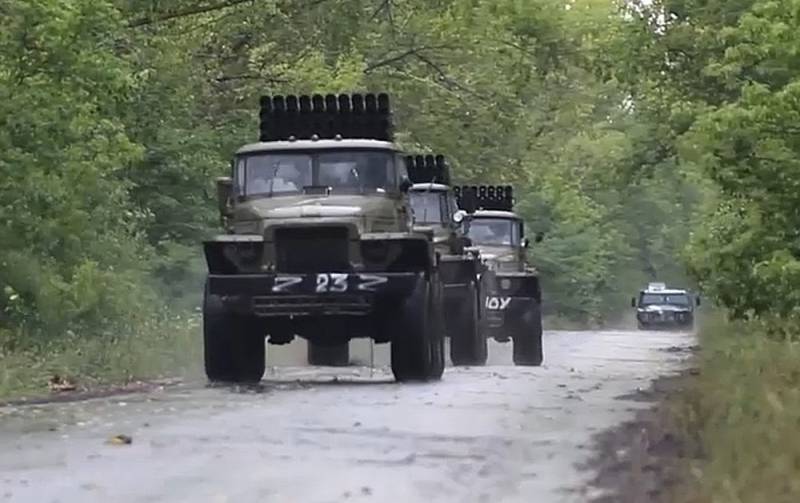 I would like to please all those who are concerned about the possible prospect of concluding between Moscow and Kyiv (or rather, the "collective West" standing behind the latter's back) some kind of agreement that nullifies the goals and objectives of the NWO. As I myself have repeatedly written - "obscene world." Nothing like that is likely to happen. The "sworn friends" of Russia, having carefully (as it seems to them) weighed all the pros and cons, firmly decided to wage war with it to the bitter end, investing more and more forces and means in it. This is clearly indicated both by the sharply toughened rhetoric of Western leaders and by recent events.


Talk about a "long", "protracted", "exhausting" war has recently been heard more and more often. Being in the grip of an economic (and, above all, energy) crisis that seriously threatens it, the West, nevertheless, does not intend to give up its own plans. At the same time, they not only remained invariably anti-Russian, but became much more sinister. Knowing full well that it may not be able to withstand the next round of confrontation with Moscow, the “world community” (which, by the way, turned out to be not so world-wide), apparently, is striving to solve everything in one fight. Hence - some adjustments in strategy and tactics that do not change the ultimate goal - to destroy Russia as a power once and for all.

Three stages of perception of NWO in the West

It is possible with a high degree of certainty to try to divide the attitude of the "collective West" to what is happening in Ukraine after February 24 this year into three main stages. The first was characterized by confusion and confusion: “The Russians still dared!” At this stage, the local “allies of Kyiv” were mostly concerned with how to achieve his surrender with minimal image losses for themselves and the ability to maintain control over at least some part of the Ukraine project. Still - the rapid breakthroughs of Russian troops in the Kiev and Chernigov direction, their stunning success in the South - all this gave rise to defeatist and decadent moods.

However, this "golden" moment was hopelessly missed. Negotiations began in Istanbul (despite the fact that at that time there was no one to talk to and nothing about), and then those very “gestures of good will” followed, which I don’t even want to remember. This gave both the Kyiv regime and its patrons a chance to launch a counteroffensive, primarily on the information and propaganda front, where the image of the Russian armed forces as “weak”, “unprepared” and “greatly overestimated” began to be created at an accelerated pace. The series of failures that followed (like the destruction of the cruiser Moskva) and the propaganda campaign skillfully carried out on their basis allowed Kyiv and its patrons to extinguish the emerging panic, mobilize society as much as possible and, most importantly, convince it that "this war can be won." This is where the second stage of the perception of the NMD by our enemies begins - the very one, the central point of which is the thesis that it is realistic for Russia to "inflict a military defeat." The main thing is to properly saturate the Armed Forces of Ukraine with Western weapons and prevent the Zelensky junta, which has gone bankrupt in the most literal sense of the word, from collapsing, feeding it with solid financial “injections”.

You can laugh as much as you like at the "analytical reports" of the same "British intelligence", which over and over again undertakes to assert that "Moscow has exhausted its stocks of high-precision missiles" or that it "does not have a personnel reserve for the formation of new units and formations." However, it was precisely such “stuffings”, which went on in a continuous stream, that created the information background against which an opinion about the NWO was formed by everyone in the West - from ordinary inhabitants to very high-ranking officials. To our great regret, Moscow, again, with its inexplicable actions, to a large extent contributed to the fact that it was precisely such fabrications there that were taken at face value. Never implemented warnings about "attacks on decision centers" or the destruction of convoys with NATO weapons were quite rightly interpreted as signs of weakness and unwillingness to take decisive steps. "Don't hit? “Then they can’t!” Is it really incomprehensible that it could not have been perceived otherwise?! It seemed to the “collective West”: a little more deliveries of strike weapons, a little more sanctions, diplomatic pressure and threats - and Russia would throw a white flag, a terrible bear would crawl away, bleeding, into its lair, where it could be finished off without any problems.

By the time the six-month period has expired since the beginning of the SVO, it is clear to everyone that nothing of the kind will happen. Sanctions fail to do serious damage the economy Russia, its “international isolation” is not to be taken seriously, and howitzers and MLRS regularly handed over to crooked paws cannot turn the situation at the front. Unless they give more opportunities for strikes against the civilian population. Ukraine is devouring more and more resources - both financial and material, but the effectiveness of their use is very doubtful. In the West, they began to talk about the fact that “the war is hanging on a dead center” and is acquiring some kind of character that is not the same as the one that the forces that provoked and supported it were counting on.

“It is with great pride that I declare…” War?

As a matter of fact, it is this very moment - that is, the days that are coming to us - that can be regarded as the "starting point" of the third stage. At first glance, for the representatives of the “collective West”, it would be most logical, having become disillusioned with the military potential of the Kyiv regime, which even solid assistance could not significantly strengthen, try to seat its representatives at the negotiating table with Moscow and try to negotiate if not mercy for Ukraine, then at least delay its destruction. Even if it would have to be done at the cost of certain concessions of a foreign policy, military or territorial nature. It is quite obvious that the Western "partners" are not going to fulfill any promises given to Moscow and do not take seriously any obligations assumed to it. So why not play diplomacy?

Nevertheless, events are developing in the opposite direction. Speaking at the virtual Crimean Platform summit on August 23, British Prime Minister Boris Johnson bluntly stated that any negotiations with Russia "would be a disaster for the whole world." You can, of course, try to write off the categoricalness of these words to the fact that there is nothing left for the unkempt "Johnsonyuk" to head the government. However, there is every reason to believe that his successor in this post (and this, alas, most likely will be Liz Truss) will far surpass her predecessor in aggressiveness and Russophobia. The mere admission of this lady that she is ready to use nuclear weapons without hesitation does not make the slightest doubt. And the statements of all other European leaders on the same "platform" sounded no less harsh and uncompromising - which, by the way, I literally wrote about in the previous article. And this audience is not limited to only menacing words, which will be discussed in detail a little later.

It is clear that such "unshakable support" could not but move Kyiv to sharply tighten its rhetoric (although, it would seem, where else?!). It got to the point that on August 24, the Ministry of Defense of the “non-state” issued an official call for Russia ... to immediately “sign its surrender before it is destroyed.” A complete rejection of any negotiations and a peaceful, diplomatic settlement of the conflict is not voiced in the office of the clown president, except perhaps by the cleaners. Moreover, they began to actively convince their fellow citizens of "the return of Crimea by any means" - even if the "world community" is against it. That and look about the capture of Moscow, they will start talking ... At the same time, the "fathers of the nation" advise Ukrainians to "prepare for a difficult and protracted war." However, they assure that it will certainly and always be “victorious”. Where do the “legs grow” from this next “attack of courage”? Yes, as usual - from Washington.

There, exactly on the "day of independence" at the highest level, they announced the provision of an unprecedented "military aid package" to Kyiv with a total value of almost three billion dollars. US President Joe Biden personally announced a new portion of arms deliveries, who, in his own words, "with great pride." The assortment includes six NASAMS air defense systems with additional ammunition, up to 245 155-mm artillery ammunition, up to 65 shells for 120-mm mortars, 24 anti-artillery radars, as well as a very impressive “line” of combat UAVs. However, this is only what is officially announced. Surely with such a huge amount there will be something else, not yet advertised.

Canada "acted" somewhat more modestly - its Prime Minister Justin Trudeau announced the allocation of about $ 3 million to the Ukronazis. The funds will mainly go to the needs of the local policemen, but the Armed Forces of Ukraine will definitely get something. London is traditionally generous - Boris Johnson, who once again visited Kyiv, announced the appropriation for military support of the regime there is not such a small amount - 54 million pounds sterling. The European Union is still "modest", but it will definitely try to "pull itself up" to the level of the Anglo-Saxons who twist it as they want. At the same time, very intriguing details were revealed regarding the upcoming deliveries from overseas. In particular, it turned out that the same NASAMS air defense systems currently do not exist in nature. They are yet to be produced. And in general, the Pentagon admitted that some types of weapons from the package announced by Biden "may arrive in Ukraine no earlier than within the next 1-3 years."

What does this indicate? Yes, first of all, that the West categorically does not intend to curtail the conflict, not only in the near future, but in general ever. Until the "maximum program" is completed - the military defeat and destruction of Russia. In fact, this is already an open declaration of war, to which it is necessary to respond appropriately and as soon as possible. Under such conditions, the expediency of Russia's further actions in the format of a limited special operation raises very serious doubts. Yes, we do not want war. But the West imposes it on us and obviously will not back down from its own.
Reporterin Yandex News
Reporterin Yandex Zen
54 comments
Information
Dear reader, to leave comments on the publication, you must sign in.